Popular film star Rajinikanth has announced he will take the political stage in India's southern state of Tamil Nadu. What drives Indian actors into politics and why do they succeed? Murali Krishnan reports. 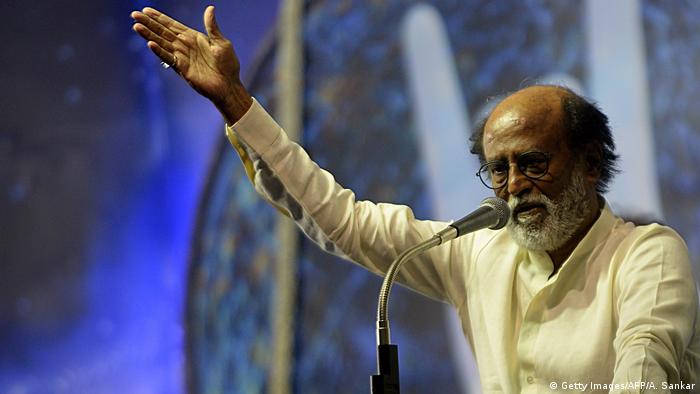 The balding superhero of India's Tamil films, Rajinikanth, has taken a plunge into electoral politics and announced his intention to float a new party, in a bid to usher in political change.

The 67-year-old said on Sunday to his cheering supporters that his objective is to change the system and bring good governance to Tamil Nadu, home to about 72 million people.

"I am joining politics because it is the need of the hour," Rajinikanth said at the end of a six-day event to meet fans who had gathered in thousands, some of them waiting overnight, in frenzied anticipation of an announcement.

"I am not doing this for any post. I do not come for money or fame, as I have them enough. But the politics has become so bad that rest of the world is laughing at us," Rajinikanth said in Tamil. "I am not a coward, so I have to step in."

Rajinikanth is one of India's most popular stars and many of his 175-plus films since 1975 have broken box-office records, mostly in the Tamil and Telugu languages. Huge cut-outs of the actor are a common feature in Tamil Nadu's towns and villages, and fans even pour milk over them in a ritual used to worship Hindu gods.

Born Shivaji Rao Gaekwad, Rajinikanth worked as a bus conductor for three years before joining an acting school. The Indian government honored him with top national awards for his contributions to the arts.

His decision to join politics comes at a time when Tamil Nadu is in political flux after the death of its iconic former chief minister, J Jayalalitha, in December 2016. The current political vacuum in the state means Rajinikanth’s political prospects appear bright, say observers.

"My dear friend, my colleague and a humble considerate human, Rajinikanth, announces his decision to enter politics... my best wishes to him for his success," one of Bollywood's biggest stars, Amitabh Bachchan, tweeted.

But most political parties - especially the two regional parties DMK and AIADMK, which have dominated Tamil politics and have the most to lose from Rajinikanth's foray - were guarded in welcoming his announcement.

Prime Minister Narendra Modi’s Bharatiya Janata Party (BJP), despite its preeminent position across most of India, remains a fringe player in Tamil Nadu. Modi, however, appears to have a good rapport with the Tamil star, who has often publicly praised the prime minister.

From celluloid into politics

Many Indian film actors have made the leap or rather transited easily from cinema to politics and Tamil Nadu is no stranger to onscreen heroes transforming into successful politicians. 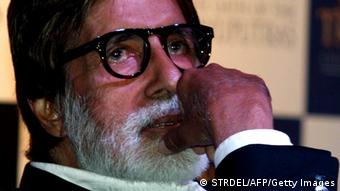 Big names include M K Karunanidhi and Jayalalithaa, who have shaped the state's politics over the past three decades.

"The primary drive seems to arise from the pre-existence of a mass base due to the proliferation of actor fan clubs - especially between 1967 and 1990 when actors and script writers were immersed in Dravidian politics," cultural journalist Sadanand Menon told DW.

"This is something ingrained in the Tamil Nadu psyche which is quite unique," noted film critic Shubra Gupta told DW.

"These cult figures with super star status have played mythical roles and that has conformed to a culture."

This phenomenon of actors entering politics is also true in other southern Indian states like Andhra Pradesh and Karnataka, which have seen a similar trend although it is not as pronounced as in Tamil Nadu.

A good example in Andhra Pradesh is the actor Nandamuri Taraka Rama Rao - or NTR as he was popularly known. He migrated from the theater to the big screen and played the roles of Hindu gods in the mythological era of Telugu cinema.

NTR strode on the screen like a colossus and used this popularity to start the "Telugu Desam" party based on fostering pride in Telugu, the local language. He served as chief minister on three occasions during a period of seven years between 1983 to 1994.

"Tamil movies and to some extent Telugu movies were propaganda machines that catapulted such stars into politics, Anbumani, a film historian, told DW.

"Many have used movies as their primary political vehicle knowing there is a large grassroots base."

It is a still a big question whether Rajinikanth has similar attributes and can ride high on what his predecessors achieved.  But given his massive fan base, he is willing to test the political waters.

Pakistan to lift ban on Indian movies – a positive move

Pakistani cinema owners are set to resume the screening of Indian films after a two-month self-imposed ban linked to the Kashmir conflict. Can cultural exchange reduce hostilities between India and Pakistan? (19.12.2016)

Ginni Mahi is the newest voice of a musical genre that speaks for India's Dalit castes. With inspiration from activists and a growing fan base, she uses pop flair and social media to spread her message. (03.10.2016)