Thousands of mourners have taken to the streets in Chennai after the death of one of India's most powerful politicians. Officials are watching out for cases of self-harm among fanatic supporters. Murali Krishnan reports. 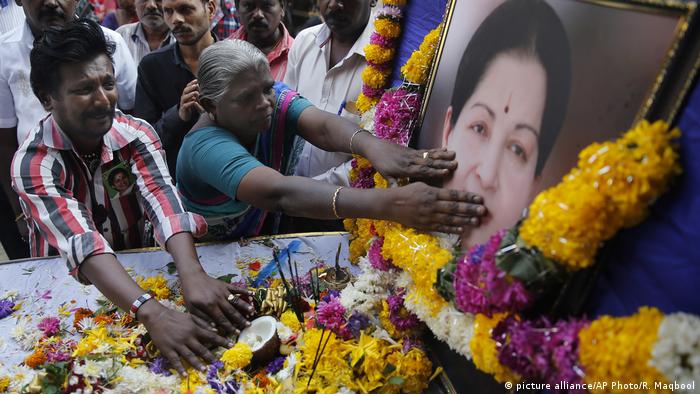 After battling a 75-day-long illness, Jayaram Jayalalithaa, the iconic Chief Minister of the South Indian state of Tamil Nadu died on Monday. Jayalalithaa, 68, was hospitalized for over two months before dying of cardiac arrest.

After her death, massive crowds packed into the spacious Rajaji Hall in the state's capital, Chennai, to pay their final respects. Her body lay in state draped in her favorite green sari. Tens of thousands of supporters, some of whom have a fanatic allegiance, scrambled over each other to get a last glimpse of Amma (mother in Tamil) or Puratchi Talaivi (revolutionary leader), as Jayalalithaa was called by her followers.

Women, their arms tattooed with Jayalalithaa's face, stood wailing and clutching their heads and beating their chests. Men pitched tents at the Apollo Hospital where Jayalalithaa had been for 75 days, refusing to believe that their leader was gone. The sea of humanity grew as some tried to break the barricade so they could have a direct view of her.

"It is clear that Jayalalithaa was a larger than life figure. She enjoyed a reverence that is unmatched and in many ways was a cult figure for her followers. Her stature was quite unparalleled," Shashi Tharoor, an Indian Member of Parliament, told DW.

Jayalalithaa's fluctuating health caused considerable tension and uncertainty across the state. Millions prayed during a sleepless night, as security across the state was ramped up as a precaution against violent or self-harming protests.

The security establishment has every reason to be worried given Tamil Nadu's volatile history of supporters taking drastic steps such as self-immolating with kerosene or committing suicide as a sign of solidarity with politicians.

An extreme cult of personality

Tamil Nadu has a history of political cadres having adherents using extreme methods to express their emotions. This was seen during the anti-Hindi agitation in the mid-1960s when eight people burnt themselves to death.

In October 1984, when the former chief minister and one-time film star M.G. Ramachandran fell ill because of a kidney ailment, 100 people attempted self-immolation and 10 died.

Similar scenes were witnessed in October when a 39-year-old man died after setting himself on fire at a crowded thoroughfare. He was said to have been depressed by Jayalalithaa's ill-health.

"This self-harming admiration is an issue that is more pointed in Tamil Nadu," Sanjay Srivastava, a professor of social sciences, told DW. "People tend to swear to a cult of personality, as he or she has done well for the welfare of the larger good."

In 2014, when Jayalalithaa was arrested in a corruption case, mayhem broke out. At least 16 people were believed to have committed suicide either by setting themselves ablaze or by hanging themselves after she was given a four-year jail sentence.

Ten people reportedly suffered cardiac arrest, apparently unable to come to terms with the verdict, while one person died of shock. In addition, hundreds of supporters shaved their heads, a ritual associated with mourning.

If that was not bizarre enough, in February 2015, Shihan Hussaini, who calls himself a "para-psychic and mass-influencer," had 6-inch nails driven into his hands and feet as he crucified himself wearing a shirt with "Amma" printed on it.

Hussaini's objective in carrying it out was his way of calling for Jayalalithaa to be reinstated as Tamil Nadu's chief minister. She had been disqualified from holding the post after a court convicted her of having been involved in corruption. 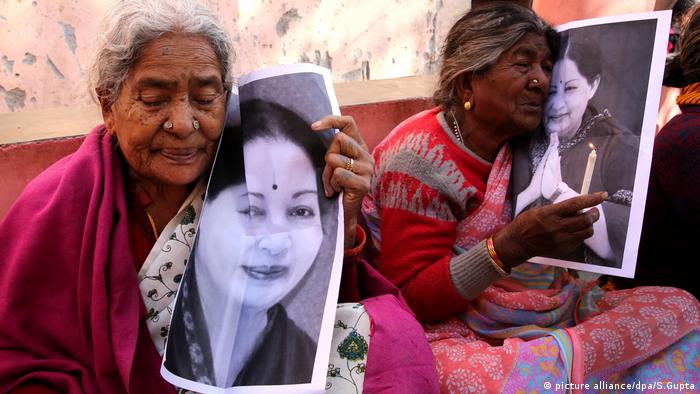 A state of tension

"Clearly, the former movie star, who served four times as chief minister has a huge groundswell of support that sometimes defies rational behavior. This demonstration of sycophancy is unique to the state," S. Vaidyanthan, a journalist based in Chennai, told DW.

In the past, many of Jayalalthaa's supporters walked on fiery hot coals, drew pictures of her in their blood and tattooed elaborate images as testimony of their loyalty.

According to data from the Indian National Crime Records Bureau, Tamil Nadu has consistently been among the top two states for the highest number of suicides in India, with over 16,000 people killing themselves every year.

Chennai had the dubious distinction of the maximum number of suicides for any Indian city, with 2,214 in 2014.

That Jayalalithaa ruled Tamil Nadu with an iron fist and yet commanded the allegiance of her multitude of supporters is well known. And the image of Jayalalithaa's trusted lieutenant Ottakara Panneerselvam being sworn in as chief minister after her death with a picture of her in his pocket, will last as a reminder of how her party swore absolute loyalty to her.

Jayaram Jayalalithaa, who enjoyed almost God-like status among her followers, died after two months of illness. Crowds had gathered in the thousands since her condition worsened. (05.12.2016)

The court has ruled the national anthem must be played in cinemas and everyone must stand. It said the decision would instill patriotism and nationalism. (30.11.2016)