If you think Earth is plentiful, wait until we get to space. Many thousands of near-Earth asteroids are littered with valuable minerals, and the moon miners are lining up for a dust rush. But one man is ahead of us all. 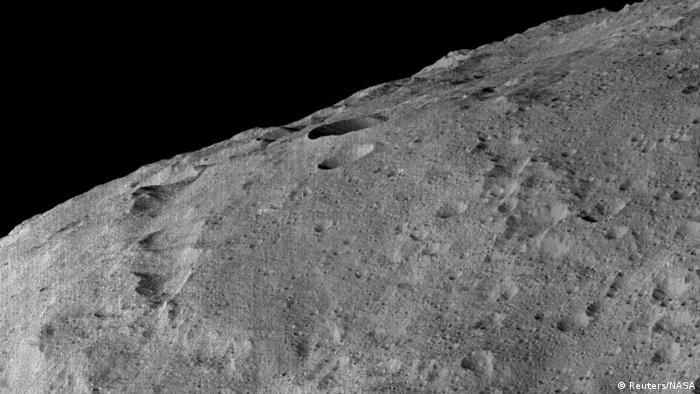 Don't let his title fool you. The "Head Cheese" of the Lunar Embassy is a clear-thinking, straight-shooting kind of guy. At least he appears that way over a shaky cellphone line from Nevada to Bonn, Germany. And so if you ask Dr. Dennis M. Hope to tell you who he thinks owns space, he'll answer with a simple: "I do!"

That's right: Hope and his customers (or are they followers?) own all the planetary bodies in our solar system. And they intend to defend and ultimately profit from them.

"In 2001, I had 163,000 emails from different customers around the world that wanted to know how on Earth we were ever going to protect the properties that the Lunar Embassy was selling," says Hope. "And after due consideration, the only answer we could come up with was that we needed to form a democratic republic government. So we created the Galactic Government."

All this started in November 1980. Hope was going through a divorce, hadn't worked in a year and was almost out of cash. He needed a plan. Quick. And if it wasn't for the fact that most business is a confidence trick of some sort, I'd be tempted to suggest Hope came up with the greatest con of all time.

He says he wanted to buy a bit of real estate, mortgage part of the property, and then move to Los Angeles to become an actor. But while driving down a street one day in Concord, California, he looked out the car window, saw the moon, and thought, "There's a lot of property." 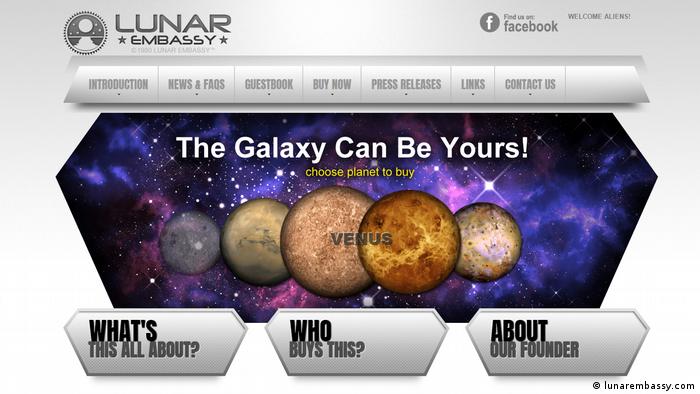 "Outer space, including the moon and other celestial bodies, is not subject to national appropriation by claim of sovereignty, by means of use or occupation, or by any other means."

Article 2 prohibited the United States and Soviet Union from planting their respective flags in space ­­- until of course the US did just that during the Apollo 11 mission when Neil Armstrong and Buzz Aldrin walked on the moon. And President Donald Trump reminded us of the fact earlier this year.

But the Outer Space Treaty was designed for the Cold War and is a legacy of that era. Its purpose was to ensure that the first space race remained peaceful, and it did that ... up to a point ... certainly if you're sloppy about your interpretation of Article 4, which theoretically prohibits any military use of space. The treaty has been less successful there. For instance, it hasn't stopped states deploying a bunch of spy satellites. But let's park that for now. Because the one thing the treaty failed to even forsee was a time when commercial operations and individuals, such as Dennis Hope, would want to put some skin in the game.

And that was a loophole through which Hope intended to fly a rocket.

"So I wrote a declaration of ownership for the moon and the other eight planets and their moons, because Pluto was still a planet back then [Ed.: It was relegated to a dwarf planet in 2006], explained my intent was to subdivide and sell the property to anybody who wanted it, and sent the statement to the United Nations," says Hope. "I also asked them to let me know if they had a legal problem with that. And I have never heard from them."

But in the 30 years since, the space industries have changed. Hope is not even alone in his quest for sovereign status - there's Asgardia, too, a "fully-fledged, independent space nation." And there are now numerous companies, rather than just states, who would rather like to mine the moon and asteroids for their minerals. That may have been a plan in 1980 but it's slowly becoming reality.

March of the miners

Estimates vary, but we know of the existence of about 17,000, or possibly 20,000, near-Earth asteroids, according to NASA's Wide-field Infrared Survey Explorer (WISE) and NEOWISE projects.

The name says it all: Their orbits bring them nearer to Earth than other celestial objects. And that's good for asteroid prospectors and miners, because asteroids hold valuable minerals and elements, like nickel, iron, cobalt, water, and nitrogen.

"The idea is to use the resources in space to build a space infrastructure," says Dr. Amara Graps, a senior scientist at the Planetary Science Institute in Riga who also heads a non-profit organization called Baltics in Space.

Asteroids and the moon could provide the "volatiles" you need for fuel to propel spacecraft. They could also provide building materials. But not all asteroids are made equal - some are more valuable than others.

"Asteroid miners are more interested in the carbonaceous chondrites, the darker ones, which are less abundant," says Graps. Carbonaceous asteroids are generally highly sought-after. They include Ryugu, Bennu, Nuwa, Hygiea, Davida and the largest object in the asteroid belt, Ceres.

With estimated values ranging into the trillions, there's a lot to be mined and a lot of money to be made. Hope and the followers of his Galactic Government will expect royalties.

"When we find there's a company that wants to go on our properties, we don't have a problem with that. But the Galactic Government feels that we're like any other government," says Hope. "We would be upset about anyone who went up and started mining without getting a license and an agreement in place with us."

DW: And you would expect royalties on that mining? 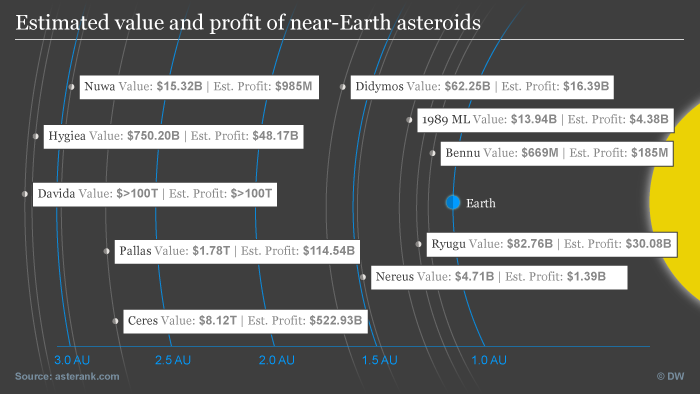 The issue of ownership will plague many commercial endeavors in space, but the Outer Space Treaty is unlikely to satisfy everyone in the long run when disputes arise. Two countries have taken a lead with new legislation. The 2015 Commercial Space Launch Competitiveness Act entitles US citizens to extract, own and sell asteroid resources. A year later, Luxembourg adopted its own law ensuring private operators similar rights to extract resources in outer space.

So the laws are being updated. But there's a strong smell of countries simply marking out legal territories, like dogs peeing on trees. If you want to exploitation space resources, you had better hurry, because space still runs on a first come, first served principle - as it always has. The Lunar Embassy's 37 year legacy proves it.

"As for whether it's fair, the first come, first served," says Dr. J.L. Galache of Aten Engineering, an asteroid prospector, "that's pretty much the way the mining industry or fossil fuel industry operates."

The same goes for ocean fisheries and, for that matter, the internet. And we've seen the damage done there - the conflicts of interest, or worse.

"Yes. That is something that comes up," says Galache. "We've been fumbling along, right? And now we have an opportunity, we actually know what's going to happen. There will be mining, and certain asteroids that will be worth more than others. There will be several companies. So can we set up the legal and political infrastructure ahead of time, knowing the mistakes we've made in the past?"

Good question. But we still need an answer.

"I'm not sure how you can make it fair and do this mining as a planet, let's say, and not as individual private companies," say Galache. "But definitely, I would want this to be fair and not to create conflicts, for sure."

It's a warming thought that we may live up to the mantra that our activity in space will benefit all of humankind, as Wernher von Braun put it before Apollo 11 took off. But there's a dominant stream in the space industries that is determined to do things differently, free of the restraints of national or international cooperation. Damn the governments, they say. 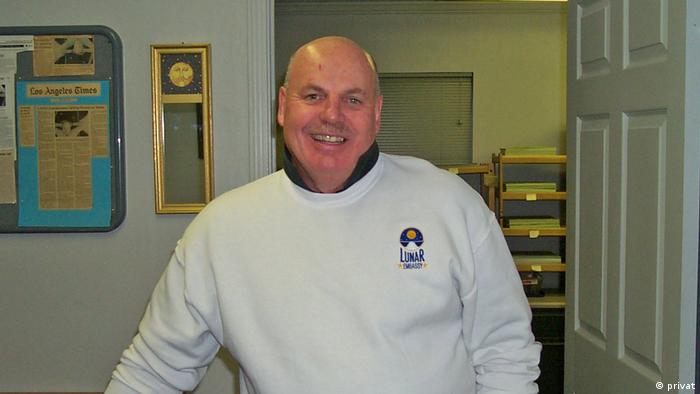 Hope, the Lunar Embassy's "head cheese." When he was growing up people said the moon was made of cheese

So while a man like Dennis Hope may have some interesting, albeit odd, ideas - like a 2.5 kilometer high pyramid hotel on the moon, or his anti-gravitic propulsion system that travels at 0.99 the speed of light (Hope: And we don't know how to slow it down), or that Mars can be terraformed in just 30 years (DW: Oh, I read 500 to 1,000 years. Hope: Well, they're lying.) - you have to admire his ambition and transparency. He makes no bones about the fact that not everyone will benefit from space exploration. (Hope: Put it into perspective, damnit. How many people miss out on things on Earth?!)

"I don't know that I need any government's permission on this planet at all to do what I'm doing," Hope tells me as we end the call.

In a sense, I say, you've already left Earth, haven't you?

And on that note we bid our farewells.

Zulfikar Abbany has produced a panel discussion for the 2017 Battle of Ideas in London called "The Final Frontier: Who Owns Space?" and will be speaking there on October 29. The other speakers are Dr. Saskia Vermeylen, University of Strathclyde; Mike Lawton, CEO of Oxford Space Systems; Dr. Jill Stuart, London School of Economics; and Professor Ian Crawford, University of London.

Asteroid 2012 TC4 will pass mighty close by our planet this Thursday. A direct hit would cause untold destruction. So, are we really prepared for such an event? (11.10.2017)

Lawmakers have taken initial steps to fund a pioneering venture intended to bring back rare minerals from space. A new law is being planned to establish a legal framework for the commercial exploitation of asteroids. (03.06.2016)