Asteroid 2012 TC4 will pass mighty close by our planet this Thursday. A direct hit would cause untold destruction. So, are we really prepared for such an event? 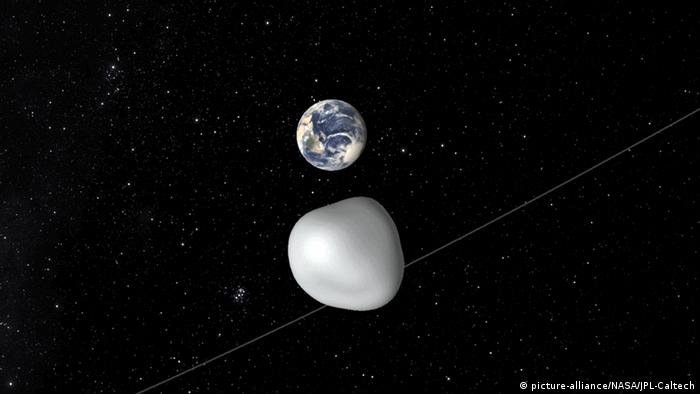 A digital clock showing the last seconds before impact, a manned space craft whose mission is to stop a massive asteroid and a hero who is going to save Earth from certain destruction – the stuff movies like Armageddon are made of. But could this become reality? Not really!

The reason is not that Hollywood calls up the most obscure weapons technologies, but simply that nobody has a ready-made plan what to do in such a scenario. Which methods should one use? Would there be a space mission? Who would take responsibility for it? Would we use rockets to shoot at the asteroid? And finally: who would pay for it all? Lots of unanswered questions.

Asteroid 2012 TC4 is circling the sun in elliptic orbit. Most likely a collision with another celestial body pushed it into that orbit.

Anyhow, on October 12 it will get dangerously close to Earth – at least as astronomical distances are concerned. At another fly-by in the future the same asteroid could indeed hit our planet. 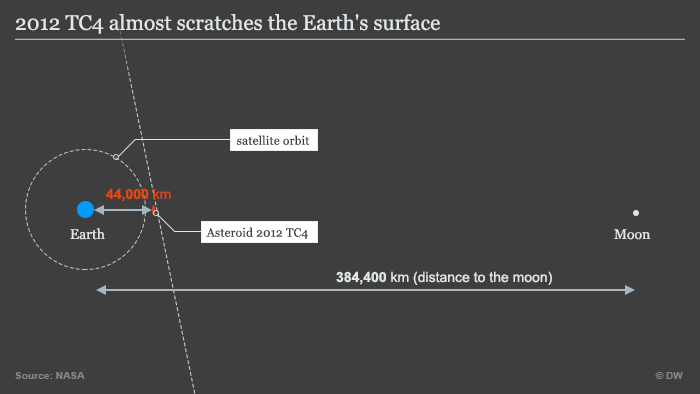 What would happen if it hit us?

The asteroid weighs about 8,000 tons. It travels at an incredible speed of 27,500 Kilometers per hour – enough to circle our planet in less than two hours. It is as big as a four story building.

A direct hit would have catastrophic consequences. Another Asteroid – similar in size - gave us an impression of how dangerous such objects can be. As a meteor – an asteroid that hits Earth - it crashed near the Siberian town of Chelyabinsk in 2013.

Chelyabinsk: the day after impact

Its pressure wave injured 1,500 people, shattered glass and damaged 7,000 buildings over a large area. And then, the Chelyabinsk meteorite or 2012 TC4 are small compared to some other asteroids out there, somewhere in space.

As in any good thriller movie, there are usually two options: Shoot it into pieces or divert its course. In the first scenario – more Western style – one would shoot a rocket at the asteroid – maybe a nuclear weapon. That could either break up the rock, or – if it's too big – change its orbit.

The second option, more pacifist in style, would involve something called a "gravity tractor." A heavy spaceship would get close enough to the asteroid to divert it from its collision course just by gravitation. This would be much more difficult and complex to properly calculate and put into practice than simply hitting the asteroid with a vessel. 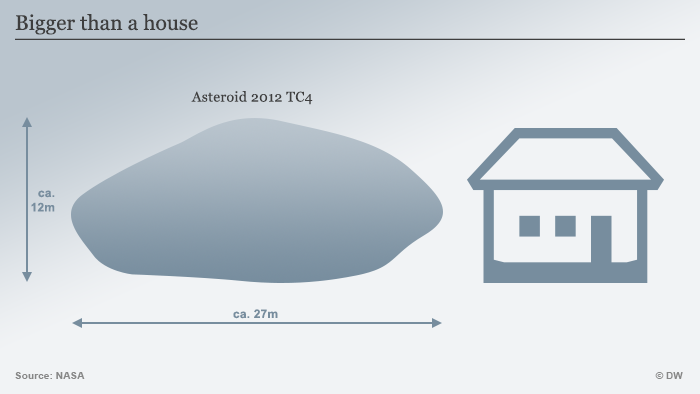 How are the international space agencies preparing?

They are doing three things: monitoring, monitoring and more monitoring. This enabled them to spot objects like 2012 TC4.

Rüdiger Jehn is in charge of near-Earth objects at the European Space Agency (ESA) in Darmstadt. He is working on developing a better early warning system.

"If at least we can tell the population: 'stay in basements and shelters!' this would already help. It would be like a tornado warning. One could predict the impact very precisely and prevent a lot of damage. That would be a step forward."

ESA has put aside 26 million euros to build such an early warning system. One of the components is a fly-Eye-Telescope – a ground based small telescope that scans the sky in all directions. The first prototype is scheduled to start operating in 2019. A whole network of such telescopes would later be combined to cover most of the skies above us.

But these telescope can't detect every threat. Objects that fly towards us from the direction of the sun will still be unvisible to telescopes. That includes about 15 to 20 percent of asteroids, Jehn says.

Will we eventually all die from a meteor hit?

Finally some good news: Very dangerous objects, considerably larger that 2012 TC4 or the Chelyabinsk meteor, are usually easier to detect. Astronomers generally find them decades before they can pose any threat to us.

If that would happen, Jehn believes, the big space agencies - NASA, Roskosmos and ESA - would poll their resources. They would have enough time to prepare and most of all: "If such an object would be detected 20 years before impact, than all of a sudden there would certainly be enough money to face the task."

Protecting Earth from an asteroid strike - what can we do?

As a humble Earth-bound species, humanity has been lucky enough to avoid major asteroid collisions. As we take our first steps into space, scientists are working on ways to protect Earth – before our luck runs out. (02.09.2017)

Asteroid Florence to fly by Earth, NASA says no danger

Asteroid Florence has passed unusually close to our planet, offering a rare treat for both professional and hobby astronomers. Scientists said there was no danger that the large object would hit Earth. (01.09.2017)

Divers have brought to shore a 570-kilogram (1,256 pounds) chunk of a meteorite which had blazed over the Russian town of Chelyabinsk in February. Its impact was the largest on record in decades. (16.10.2013)

In mid August, showers of meteors hit Earth. The Perseids return at the same time every year. Open your eyes, you may see a wish come true! (11.08.2017)

After climate change, the next 100-year threat is asteroids. But NASA's got a plan: A mission called DART. DW talks with the space agency's Thomas Zurbuchen.