Who are the Russians leaving their country? | Culture | Arts, music and lifestyle reporting from Germany | DW | 05.04.2022

Who are the Russians leaving their country?

Since its invasion of Ukraine, Russia is experiencing the largest exodus since the October Revolution of 1917. Many who are leaving are intellectuals and artists. Their future is uncertain. 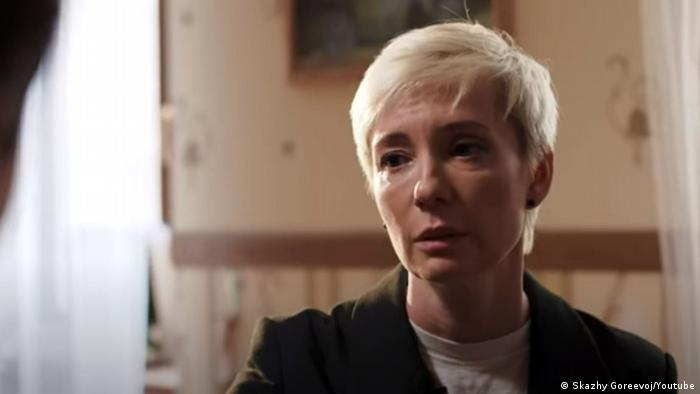 'I'm not a traitor — but I'm afraid to return to Russia': actress Chulpan Khamatova

On the night of March 4, 2022, Russian investigative journalist Andrei Loshak could hardly sleep — in fact, he had slept very little since February 24, the day Russia invaded Ukraine.

He checked channels on the encrypted messaging app Telegram, and found one message in particular that made him freeze in fear: In the near future, martial law could be imposed in Russia, which would make it impossible to leave the country.

Over the next weeks, he began to think about what to do. Eventually, he realized he had to leave — immediately. The same day, Loshak was on a plane to Tbilisi, the capital of Georgia.

"Here in Georgia, I immediately met so many friends and colleagues from Moscow and other Russian cities that I hadn't seen in Russia in the past years," says Loshak.

Colleagues from news stations Ekho Moskvy (Echo of Moscow) and TV Rain, which are now banned in Russia, were also there — the latter had even set up an office. "You are among colleagues here. You get the feeling that a whole scene has emigrated," he says. 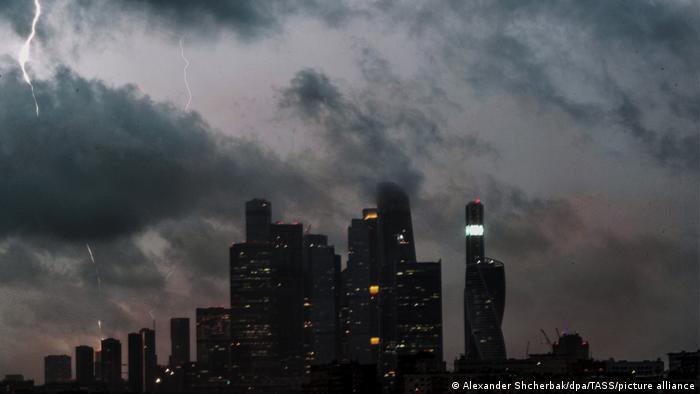 Many have chosen to leave Russia for other countries

Figures about exactly how many people have left Russia are not available, but one thing is clear — in the five weeks since the start of the war, Russia experienced the largest exodus since the October Revolution. Several hundreds of thousands of people are sure to have left the country; some suggest the number is over a million.

The figure is even more difficult to calculate since destinations like Georgia or Armenia do not require Russians to have an entry visa.

Georgia alone, however, expects to receive more than 100,000 refugees from Russia; Armenia has reported a similar number.

Many are also heading to countries that already have large Russian communities, such as Montenegro and the Baltic states, including Latvia. Others who had the opportunity to emigrate to Israel or Western Europe, especially Germany, have seized the chance.

Hardly anyone officially announces their departure. Most people simply pack up and leave with no idea about when they will ever return to Russia.

Yet despite the lack of information about how many people have left, the reason for their flight is indisputable. "We are experiencing the largest brain drain in recent history," says Andrei Loshak.

In particular, academics, IT specialists, journalists, bloggers and artists are turning their backs on Russia, as its leader, Vladimir Putin, has set the country against the whole world. 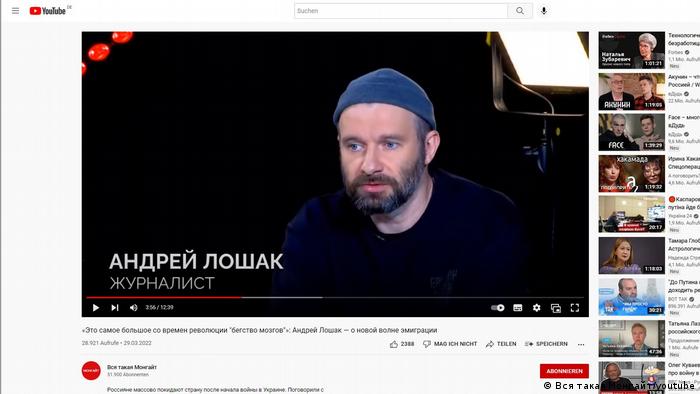 Directors, writers, fashion designers, architects and celebrities were among the first to flee.

Popstar Alla Pugacheva, for example, is building a new life in Israel with her comedian husband Maxim Galkin.

Rock star Zemfira and her partner, actress Renata Litvinova, are in Paris.

Director Kirill Serebrennikov, whose parole was surprisingly ended early in mid-March, has also been spotted in Paris, and recently in Berlin.

Writer Lyudmila Ulitskaya is also giving interviews in her Berlin apartment. Her colleague Boris Akunin is reporting from London. Prima ballerina Olga Smirnova of the Bolshoi Theater has a new job in Amsterdam, and influential video blogger and filmmaker Yuri Dud works from Istanbul. 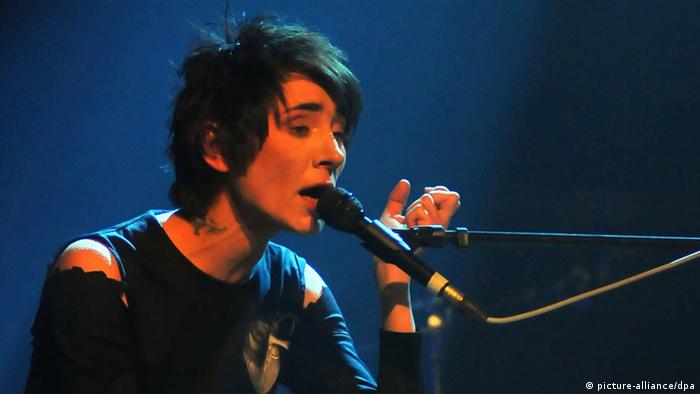 Russian rock star Zemfira and her partner, actress Renata Litvinova, are in Paris

But it's not only the well-heeled and celebrities who have left their homeland; most of those who have left are middle-class people working in creative professions. They have taken with them many questions about the future, as well as some cash, since Russian credit cards are blocked worldwide and the export of larger sums is forbidden by law.

"None of us are looking for a better life abroad right now," says Andrei Loshak. "We have all lost our livelihoods. I would call the current wave a moral emigration: Our conscience doesn't allow us to stay in today's Russia in a crowd shouting 'Zig Heil.'"

The "Z" in "Zig" is a reference to a symbol used by Putin supporters.

Loshak has coined a term for those leaving: "I would call us 'Russian Europeans.'"

Galina Yuzefovich: 'Leaving is a privilege'

According to the Levada Center, the only independent polling institute independent in Russia, pro-European Russians who condemn the war in Ukraine make up at least 20% of the total Russian population. In purely mathematical terms, that translates to 30 million people. However, very few of them are actually able to leave the country. 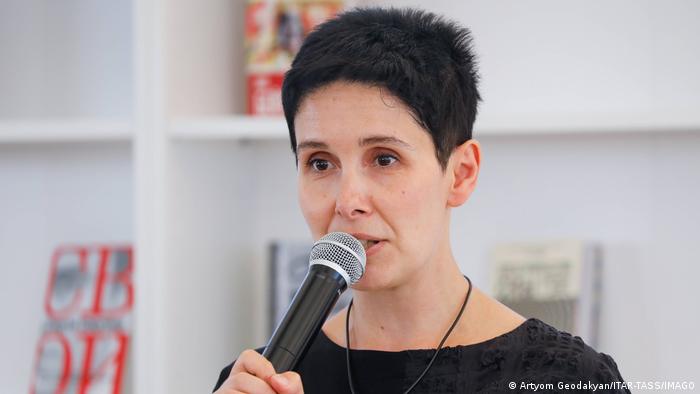 "Leaving today is neither a courageous act, nor the only ethically acceptable way to express personal displeasure with current events," says renowned literary critic Galina Yuzefovich, who left for southern Turkey with her family. "It's clearly a privilege."

Russia isn't being abandoned by the country's best, Yuzefovich says, "but simply by those who can somehow afford it." Her sympathies lie especially with those who remain and who must survive — in an open or silent protest — among other like-minded fellow citizens. The situation, she said, is comparable to Nazi-era Germany.

"The Russian culture we knew until today ceased to exist on February 24," Anton Dolin states dryly. "Both the official culture and the one that functioned in opposition mode."

Dolin is arguably Russia's most renowned film critic and a public figure. He testified in the trial of Ukrainian film director Oleg Sentsov as an expert for the defense.

"My basic position was always that I would never leave Russia," Dolin says. A week after the war began, he changed his mind.

He left the country with his family and has been staying in Latvia ever since. "I now consider my departure a form of personal surrender. Everything I did for three decades, a kind of cultural resistance to those in power, has now lost all meaning. My mission in life — to position Russia as a part of Europe — seems to have failed." 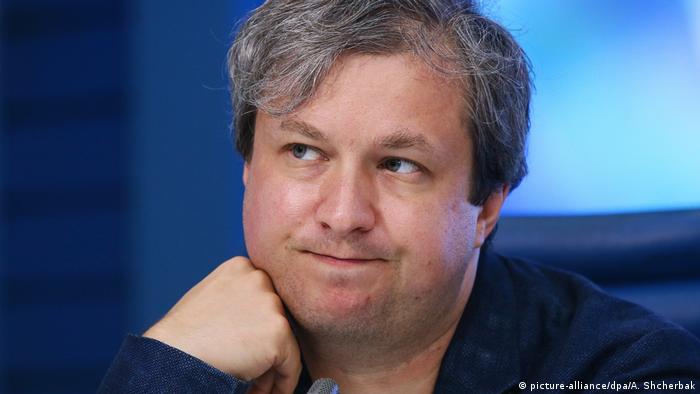 Still, the film critic says he hopes that "the serious illness Russia is going through now is curable."

"After that comes the phase of repentance for the crimes that are now being committed in our name. The price we will have to pay then will be high. Nevertheless, I will be happy to return to my country. I have no other home," states Dolin.

But returning anytime soon seems unlikely. Vladimir Putin has called those who have left the country "traitors to the nation" and declared them enemies of the state.