Supposedly under house arrest in Russia, Kirill Serebrennikov arrived in Hamburg to begin rehearsals this week. Few expected him to be allowed to leave Moscow. 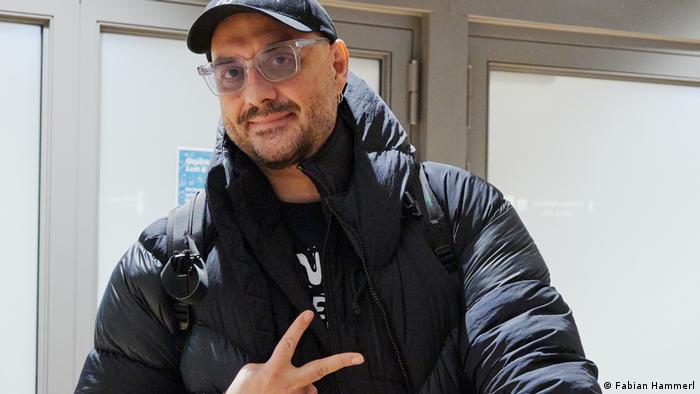 Kirill Serebrennikov upon his arrival in Hamburg

Lux and other participants in the production of Anton Chekhov's story, "The Black Monk," at the Thalia Theater in Hamburg had assumed that the star director Kirill Serebrennikov would only be joining via Zoom from Moscow during the stage rehearsals.

The internationally acclaimed opera, film and theater director has been under house arrest since the summer of 2017. He was accused of embezzling state subsidies that had gone into his "Gogol-Сenter" theater, which has become a home for Moscow's liberal-minded artists and intelligentsia.

After a tough two-year trial, Serebrennikov was sentenced to three years' probation, a fine and banned from leaving Russia. 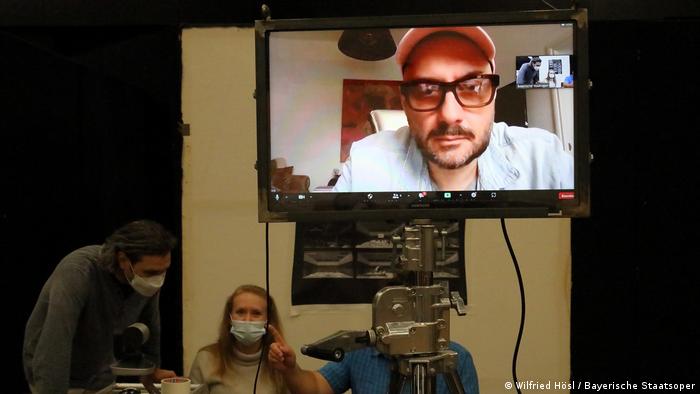 Directing at a distance: During his years under house arrest, Serebrennikov worked via video link

Now the ban has been temporarily suspended.

"Perhaps it has to do with the fact that Kirill has paid back the allegedly embezzled funds," said Lux, "even though his suspended sentence is still valid until summer 2023."

No one, not even Serebrennikov himself, can say what exactly went on behind the scenes in the Russian judiciary. Russian theater critic Marina Davydova suspects a decision "from the very top," especially since Serebrennikov's case has been a political issue from the start.

Naturally, Lux was very pleased that his friend was able to leave Russia.

"This is very encouraging with regard to freedom and also for art," he said. "There is hardly any other artist I know who is as passionate about the freedom of art, and who approaches it with such generosity, inner independence and unwillingness to compromise as Serebrennikov."

For Serebrennikov, now able to stage a work on site for the first time in four-and-a-half years, the trip to Hamburg is a liberating one.

"I am very, very happy and fortunate that Hamburg is the first European city in which I am allowed to work again," he said upon arrival. 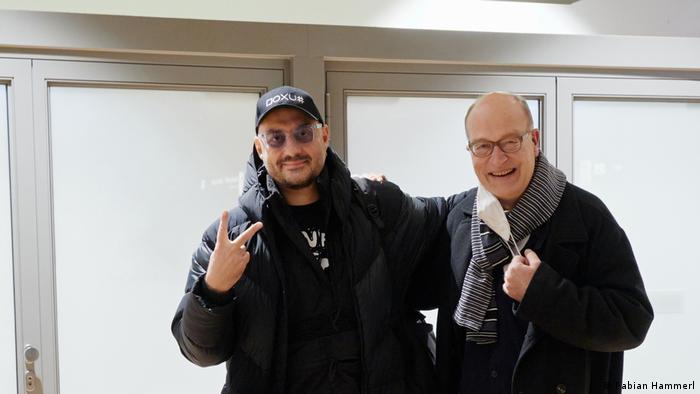 Despite legal persecution, the director has continued to work and realized several important projects within Russia while under probation.

These include the ballet "Nureyev" at the Bolshoi Theater in Moscow; the feature film "Leto," which was screened in Cannes, among other places; and the stage production "Baroque," which Russian critics named 2019's Play of the Year.

Serebrennikov also remained active internationally, having staged Dmitri Shostakovich's opera "The Nose" (based on Nikolai Gogol's story) for the season opener at the Bavarian State Opera in October 2021. Serebrennikov interpreted Gogol's subject as a pointed caricature of the current social situation in Russia and its lack of artistic freedom.

Serebrennikov worked via his assistants in Munich and via video links. He was also connected via video from Moscow during the final applause of the celebrated premiere.

For his first on-site work since his arrest, Serebrennikov has now chosen the story "The Black Monk" by Anton Chekhov, which is considered one of the most enigmatic works by the great Russian playwright.

Cast with only four characters, the mini-drama in the form of a philosophical novella is about a university professor who is haunted by the mirage of a black monk.

"There is no clear interpretation for this tale, which is very famous in Russia and completely unknown in Germany," said Lux of the upcoming Hamburg production. "The conflict, if you will, is the gap between the necessity of average bourgeois life on the one hand, and on the other, people's desire to be great and special, perhaps even brilliant." Serebrennikov's productions are provocative and political: here, a scene from the opera "The Nose" in Munich

Chekhov's tale has never been staged before, which may have influenced the director's decision.

"Kirill said that in Moscow you can see 'The Cherry Orchard' ten times and 'The Seagull' eight times every night, which he found totally boring," Lux explained.

An international ensemble cast drawn from Russia, Germany, the US, Armenia and Latvia will feature in "The Black Monk" production.

The six-week preliminary rehearsals took place in Moscow starting on November 8. After the stage rehearsals in Hamburg, the premiere is scheduled for January 22. Immediately afterward, Serebrennikov will return to Russia for an international film project, according to the official statement.

Love in times of quarantine: Serebrennikov stages 'Decamerone' in Berlin

He's no longer under house arrest, but the star Russian director still cannot leave his country. So from Moscow, Kirill Serebrennikov directed a play in Berlin that happens to echo the current coronavirus outbreak.