The transgender activist has filed documents to run as a Democratic candidate in the US state of Maryland. Her likely challenger said he is looking forward to "a robust conversation" ahead of the 2018 election. 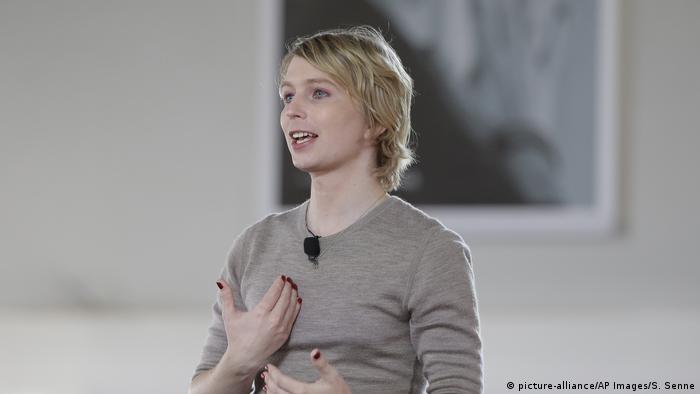 Activist Chelsea Manning will run as a Democrat for the US Senate seat in Maryland, according to documents submitted to the US Federal Election Commission (FEC) earlier this week.

US media reported on Saturday that Manning registered as a Democratic candidate in the city of North Bethesda. Manning told the Washington Post newspaper that her "only statement on the record is: 'No statement.'"

In 2013, known then as Bradley Manning, the former US Army intelligence analyst was sentenced to 35 years in prison for leaking hundreds of thousands of classified documents on the Iraq and Afghanistan war to whistleblowing organization WikiLeaks.

However, former US President Barack Obama commuted Manning's prison sentence at the end of his term in office, which led to her release last May.

Following her release, Manning told AP in an email that she was eager to define her future — but made no mention of politics.

"I'm figuring things out right now — which is exciting, awkward, fun, and all new for me," Manning wrote. "I am looking forward to so much! Whatever is ahead of me is far more important than the past."

Manning is likely to challenge Democratic Senator Ben Cardin, who serves as the senior ranking Democrat on the Senate Foreign Relations Committee.

He was first elected to the Senate in 2006 and beat his Republican challenger by 30 percentage points in 2006.

Although Cardin has yet to directly comment on news of Manning's run, his spokeswoman noted he is expecting an engaging run for office in 2018.

"Cardin is looking forward to a vigorous debate of the issues and a robust conversation with Maryland voters," said Cardin spokeswoman Sue Walitsky.

Manning would not be the first transgender candidate to challenge a sitting member of US Congress.

In 2016, Kristin Beck, a retired Navy SEAL who is transgender, failed to unseat Steny Hoyer in Maryland's Democratic Primary. Beck got 12 percent of the vote.

"It was too much for me to run for Congress," Beck said in a phone interview on Saturday. "I should have run for something lower. She might as well be running for president."

Speaking at the New Yorker Festival in October, Manning said she fears for her safety but does not plan to keep a low profile.

"I've had people telling me, 'Maybe you shouldn't be so vocal.' And that's the reason why I'm out here," she said, explaining that she "can't imagine doing anything else right now."

"I had this image of going [back] to a life that I had before," she said. "And that's not possible. And I realize now that that's OK."