Where is the Iranian opposition? 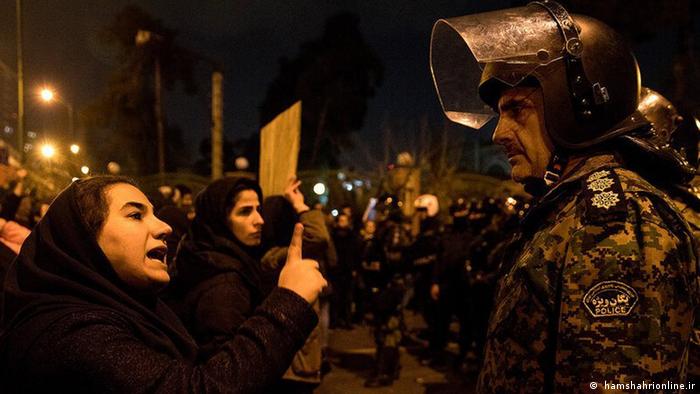 "Dissatisfaction is currently the only thing that unites people in Iran," journalist Ahmad Zeidabadi told DW from Tehran.

Zeidabadi, a staunch advocate of reforms, is one of the most well-known journalists in Iran. A winner of the 2010 Golden Pen of Freedom award, issued by the World Association of News Publishers, he currently publishes his articles exclusively on his telegram channel called the "Other Perspective."

Zeidabadi says he avoids the Iranian media as well as other social media, not because he's afraid of reprisal, but because the platforms leave no room for reasonable analysis or dialogue.

"Those who don't actively campaign for the regime change are quickly classified as regime supporters and attacked, especially on social networks," he said.

The journalist believes that the political system in Iran must reform itself, because there is no other way.

Zeidabadi has also found himself behind bars on several occasions under the current system. He spent six years in prison after he and a number of other influential journalists and activists were arrested in June 2009, shortly after the controversial re-election of President Mahmoud Ahmadinejad.

Most of the others arrested, like Zeidabadi, were handed long sentences for alleged incitement and issuing propaganda against the Islamic Republic. Since the 1979 Islamic Revolution, the regime has repeatedly made such accusations, as a method of silencing critics and dissenters – and to directly quash any formation of an organized opposition.

Additionally, recent waves of protest, such as the November 2019 protests that were ignited by a reduction in government gasoline subsidies and the demonstrations following the accidental shooting down of a Ukrainian passenger plane in early January, have been brutally and swiftly quashed by the regime.

Too disjointed to be effective

"There is no opposition movement in Iran that is capable of addressing all of the dissatisfaction of all strata of society," said Zeidabadi. "Various groups outside of Iran see themselves as part of the Iranian opposition. In my opinion, none of them has a serious chance of gaining significant approval or support within the country itself."

"Not even the United States is counting on them," said Zeidabadi, referring to exiled Iranian opposition groups.

According to Bloomberg news, US Secretary of State Mike Pompeo is said to have instructed US diplomats to limit all contact with Iranian opposition groups so as not to jeopardize US diplomacy with Iran. These include the militant Mojahedin-e-Khalq (MEK) or People's Mujahedin, which supported Iraq during the eight-year Iran-Iraq war in the 1980s, and which is classified by Iran as a terrorist organization.

The organization also has close ties with Rudy Giuliani, Trump's personal lawyer who is also seen as a shadow diplomat because of his influence, and John Bolton, a former US national security adviser.

In May 2018, the US unilaterally withdrew from the international nuclear agreement with Iran, a move also supported by Bolton. Washington now wants to put "maximum pressure" on Iran to sign a new, more comprehensive agreement, which includes stipulations on Iranian regional policy and its missile program.

Not much hope for US backing

Zeidabadi says that theoretically, the eldest son of the Shah, Cyrus Reza Pahlavi, who lives in exile in the US, could be used to build an exile opposition.

"Younger Iranians, who long for a Shah and don't know much about the past, chant his name in their protests," he told DW.

In an interview with the German daily newspaper Die Welt on January 26, Pahlavi said that the "potential for regime change" in Iran is "enormous." However, he sees a "certain lack of orientation" in the US' Iran policy, due to the deep domestic political rift.

Resisting until the 'bitter end'

"The Islamic Republic of Iran is not on the brink of collapse," according to journalist and writer Reza Alijani, who said that "we must think realistically."

Alijani underwent multiple stints in prison throughout the 1980s, and he now lives in exile in Paris.

"A look at the history of the foreign policy of the Islamic Republic shows that the system will resist to the bitter end. It will only give up when there is no other option. We also saw this in the nuclear negotiations that lasted over 13 years. "

At the same time, that model of foreign policy – that is, only making concessions under pressure – shows that increasing pressure from within Iran could also work, underlined Alijani.

"The pressure is there. It just needs to be channeled properly. Every layer of society is dissatisfied, but they have different demands, from improving the economic situation to expanding social and political freedom. We have to find ways to enable all levels of society to confront those in power with their demands, through peaceful protests such as strikes, for example. But such a movement must first be supported by the wider public."

For Alijani, it is not just about a revolution, but also about creating long-term reforms that are effectively implemented. His proposal requires intensive dialogue within civil society, and solidarity that thrives beyond social networks.