Where is Boris Johnson? 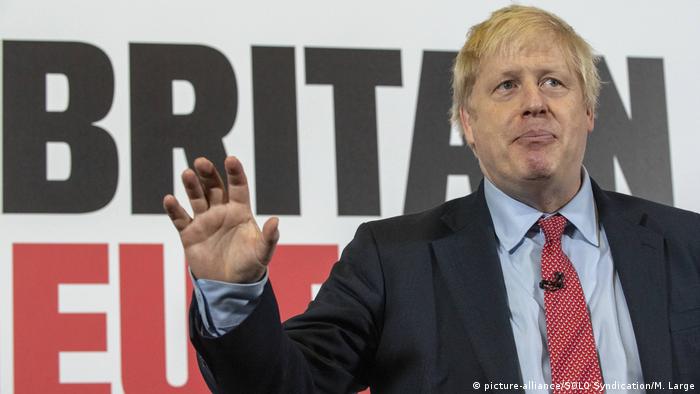 UK Prime Minister Boris Johnson's constituency is located between the two ends of the Tube's Picadilly Line, with the slightly more prosperous Uxbridge at one terminus and London Heathrow Airport at the other. This is where blue-collar workers live — cabdrivers, nurses, teachers and sales assistants. Many feel badly represented by their candidate, the upper-class prime minister.

Election campaign in a Baptist church

At Yiewsley Baptist church, wedged between halal butcher shops and discount supermarkets, Pastor Richard Blake-Lobb held a traditional town hall event with all the candidates a week before elections. "It's an important part of grassroots democracy for our citizens," he said. In 2017, Boris Johnson participated, he said, but this time Johnson declined the invitation and sent a letter instead. "I understand the concerns of the local people," said Johnson in the letter, read aloud by the clergyman — a sentence that was greeted by mocking laughter from the audience. In his letter, Johnson also promised a new hospital for the district. "I don't believe a word," a heckler shouted, and he has the laughs on his side.

Clearly, Boris Johnson has a credibility problem in Yiewsley. And because the Liberal Democrat candidate has withdrawn, the Greens don't take the election campaign seriously and the elderly Brexiteer UKIP candidate can barely get a straight sentence out, it's down to the absent prime minister and the new Labour star in Uxbridge, Ali Milani, a 25-year-old former student leader from an Iranian refugee family who grew up in social housing around the corner. Boris Johnson "doesn't know what it’s like to live like his constituents," said Milani, who presents himself as the true local candidate. "I come from here; I walk through our streets. People in our community are tired of being used as a platform to Downing Street," he added. 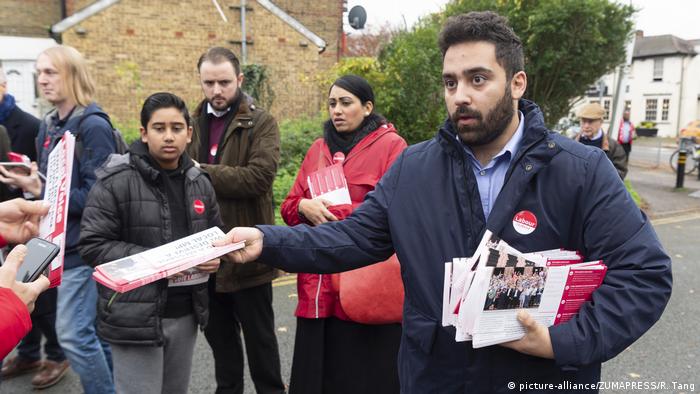 Johnson has a majority of no more than 5,034 votes in his constituency, so he could easily lose his seat if just 5% of the voters switched allegiance. "Let's make history," Ali Milani urged at the local hustings event. "Let's take the mandate from an incumbent prime minister for the first time." The Labour candidate doesn't just rely on people's dissatisfaction. "We're trying to mobilize as many young voters as possible," he said. A new generation can vote for the first time and a majority may very well vote against Brexit and the Tories.

At the other end of the spectrum, however, there is Alfie John, an independent candidate. He's in his early 20s and works in information technology (IT). "I'm selling an algorithm," he said, without giving details. He is pro-Brexit and feels the Conservatives are too lame. "I want a no-deal, hard Brexit under WTO rules," he said — even if he isn't quite sure what that is. "But nothing bad is going to happen to us," he said, adding that talk of huge truck gridlocks at ports and economic problems is nothing but scaremongering.

Where else in the world would you find such a variety of candidates seated side by side on a podium? A character in full trashcan regalia who goes by the name of "Count Binface" and a candidate named William Tobin were seated between the earnest and keen Labour candidate and the somewhat eccentric candidate for the Green Party. Tobin doesn't want to be elected but to speak about what he regards as a totally unfair electoral system. He criticizes the fact that only the first-past-the-post winner is elected to parliament and the majority of the votes are dropped. He also finds it wrong that expat Brits like him and the 3.5 million EU citizens in the country are not allowed to vote. But, he said, because his inability to vote doesn't stop him from running for election, he was sitting on the podium as a protest candidate. 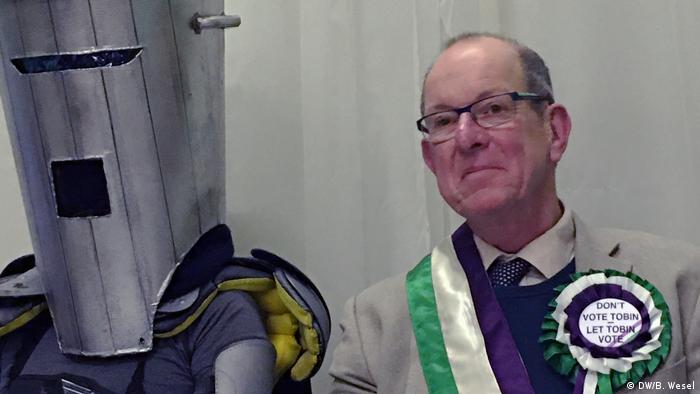 Binface and Tobin both voiced criticism of the system, but in different ways

The man behind "Count Binface" is cabaret artist John Harvey, who has for decades tried to liven up British elections masked as an extraterrestrial joker. In the past, in a different guise, he has run against Margaret Thatcher, John Major and Theresa May. This year, he is challenging Boris Johnson, all the while asking for a trillion pounds more for the health system, a joking reference to the Tories' election promises.

At the last election, 249 people voted for him in Uxbridge. It was quite something to see Pastor Blake Lobb pass the microphone back and forth between Binface, Tobin, the Labour and the UKIP candidate and the chaotic Green Party candidate — straight-faced and with the utmost fairness throughout.

What people are really worried about

Of course, Brexit was among the issues addressed. Ali Milani explained Labour's confused position, but left out the planned renegotiation with the EU, concentrating instead on the second referendum. Over the past few months, Milani has quickly developed into a professional politician. And Binface is always good for a few laughs: "I knew that Brexit would be a filthy show with Theresa May. Now I want a referendum on a second referendum," he said. As expected, the Green Party candidate spoke out against Brexit, partly for environmental reasons; the UKIP candidate was, of course, in favor of the UK leaving the EU. 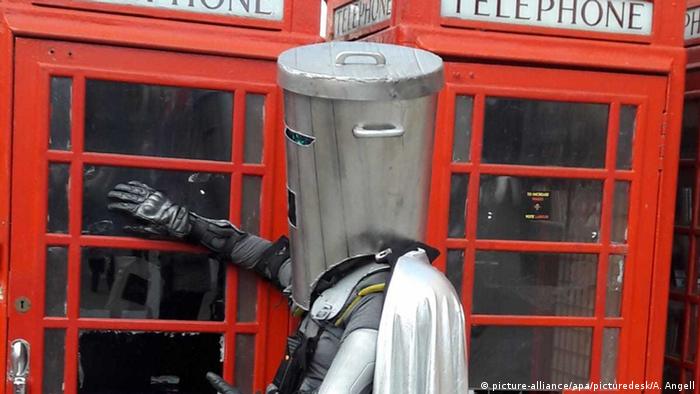 Questions handed in and read out loud showed that Brexit wasn't the main concern at all. The planned expansion of Heathrow Airport had people up in arms because they live right next to the busy airport. During the last election campaign, Boris Johnson grandiloquently declared he would rather lie down in front of a bulldozer than agree to the expansion. But on the day of the vote in the House of Commons, he flew to Afghanistan at short notice. Boris lying in front of the bulldozers was the only thing that would make the expansion worthwhile, Binface joked.

The list of local concerns was long. People were worried about plans to close the only police station in Uxbridge,  about the many deadly stabbings in London and about a dire lack of doctors and nurses at the local hospital. The Conservatives have promised 40,000 nurses, but "where are they supposed to come from," asked a resident. The local schools were on a "starvation diet" after years of cuts, the local principal chided. Milani came out with some big promises, pledging that Labour would put an end to schools having to finance books and excursions by getting "crowdfunding" from the parents. 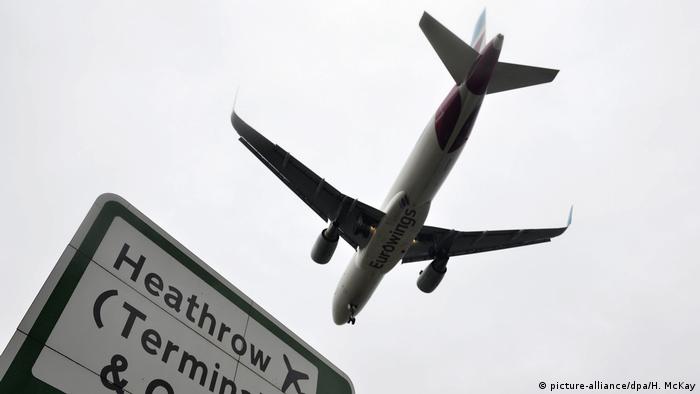 The principal, who said he was a Labour voter by nature, remained wary, however: "Jeremy Corbyn is a bad party leader. It's a question of credibility." In fact, no Labour candidate has ever been as unpopular as Corbyn, who is considered too left-wing extremist and weak. He could cost the party an election victory — a victory that isn't totally unlikely in view of the Conservatives' quarreling and shift to the right.

'Shocked that Johnson wasn't there'

After the event, a women from the audience said she was shocked that Boris Johnson didn't show up, despite his being "her MP."  She criticized the prime minister for his lack of contact with his constituents, despite his salary, and said she would vote Labour because the party had "better answers."

But the woman sitting next to her said she did not believe there would be a big change: "For every vote Boris Johnson loses here, he wins one more simply because he's a celebrity," another woman said. "He's youthful and irresponsible, but he's a celebrity." It's likely the Labour candidate would not stand a chance against him, she added.

Ali Milani seemed more hopeful about his chances, saying in his closing remarks that Britons would not want to wake up on Friday, December 13, with Boris Johnson still in power.

The opinion polls, however, suggest that his hopes are likely to be dashed.

The UK general election is being billed as the most important to take place in decades. With Boris Johnson's Conservatives seeking a majority, and rivals desperate to alter course on Brexit, what are the key issues? (07.12.2019)