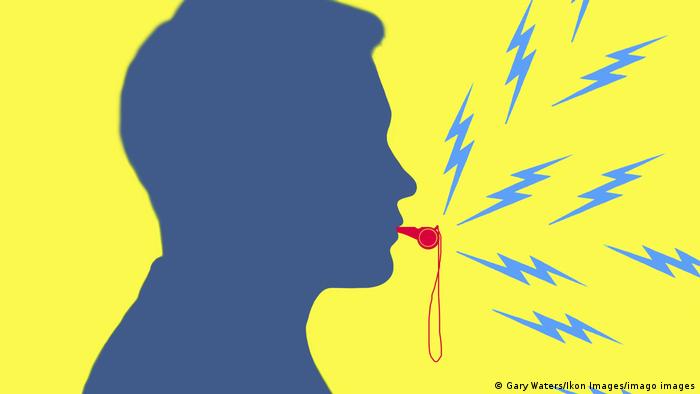 Since Frances Haugen came forward as a Facebook whistleblower in early October, her name has been ubiquitous. She has shared her findings — that the tech giant allegedly put profits over user safety — with media and lawmakers all over the world.

But before revealing her identity, Haugen covered her legal bases with the help of the nonprofit Whistleblower Aid. The agency provides free legal representation as well as additional services like media coaching and secure communication devices.

For many people, organizations that aid whistleblowers are the first contact point to expose companies or government agencies in the safest way possible.

Threats against tipsters can vary enormously, from being blacklisted in the industry, socially isolated or sued — to being killed. It depends on the country's legislation and how it enforces it.

The United States has relatively strong laws such as the Dodd-Frank Act, a response to the 2007-2009 financial crisis. The law introduced programs that entitle eligible corporate whistleblowers to an award. It also prohibits employers from retaliating against their employees who have shared information.

In the European Union, awareness for the importance of whistleblowers has also grown. Two years ago the bloc passed the Whistleblower Protection Directive. Member states have until December 17 to create national laws that comply with this directive, but none have done so yet.

"Despite robust protections and anti-retaliation remedies, whistleblowers can still face retaliation," said Siri Nelson, executive director of the National Whistleblower Center. The nonprofit based in Washington provides resources to whistleblowers and directs them to attorneys.

Even in regions that do have legislation in place, many whistleblowers need guidance on how to proceed.

The important part is to seek this help as soon as possible, said Marie Terracol, Whistleblowing program coordinator at Transparency International. The organization has advocacy and legal advice centers (ALACs) around the world to help people report corruption.

Here, potential whistleblowers can learn the basics — don't communicate about your plans on work devices or work Wi-Fi — but also receive legal advice of what their possibilities are.

"It's about helping them make an informed decision and walking them through the processes to do it safely," Terracol said.

In places where there is no protective legislation or where the legislation is not enforced, organizations often have to go several steps further.

When bank manager Gasim Abdul Kareem was arrested for helping expose a government-linked corruption scheme in the Maldives, Transparency International Maldives defended him in court. He was still convicted but got a lenient sentence, which meant he didn't have to serve more time.

The ALAC also drafted a protective bill which passed in 2019.

The Platform to Protect Whistleblowers in Africa (PPLAAF) also has to adapt its services according to the country where it works. While cases in South Africa may require more guidance on the legal front, cases in places like Congo (DRC) may require an organization to evacuate families in a matter of weeks.

"Whistleblowers are at risk everywhere, but Africa is even worse because you could lose your life or someone from your family or close circle could be physically hurt," said Gabriel Bourdon-Fattal, a project manager with PPLAAF.

It's vital to support the ones who take these risks to raise awareness and make it easier for other people to blow the whistle, he said.

For example, when Jean-Jacques Lumumba, a Congolese banker, exposed corruption connected to the family of former President Joseph Kabila, the story got a lot of traction.

Preparing for the unknown

While these organizations can be useful, and in some cases lifesaving, for whistleblowers, Nelson of the National Whistleblower Center believes they are also an asset to people who haven't yet made the leap and exposed wrongdoing.

She encourages everyone to stay informed on the issue and read the available resources.

"It's kind of like a fire drill. You know what to do in case of an emergency even though you're not planning for it," she said. "Whistleblowing can happen to anyone."

The era of tech whistleblowing is here — but will it lead to lasting change?

Facebook whistleblower Frances Haugen is the latest in a row of tech insiders who have exposed wrongdoing in the industry. So far, their revelations have had limited legal impact. But change could be coming.

Facebook is "tearing our societies apart," a former employee has told US news show "60 Minutes." The tech giant's internal research showed the company knew of the harms it caused, but optimized for profits.

The former Facebook data analyst testified before the US Senate following her explosive revelations about the tech giant's knowledge and negligence of its own harmful effects.

Frances Haugen said her former boss, Mark Zuckerberg, should step down and allow change instead of devoting resources to build the so-called "metaverse."