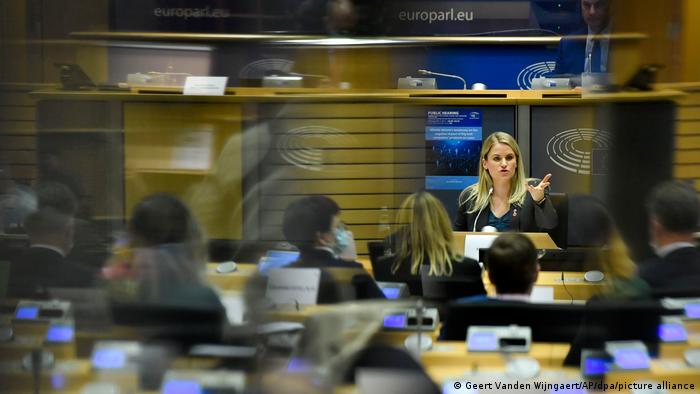 Facebook whistleblower Frances Haugen sat down with lawmakers in Brussels on Monday, encouraging them to stiffen their resolve when it comes to reigning in Big Tech.

Addressing the European Parliament committee currently debating the make up of the Digital Services Act (DSA) put forth by EU Competition Commissioner Margrethe Vestager, Haugen said: "The Digital Services Act that is now before this Parliament has the potential to be a global gold standard. It can inspire other countries, including my own, to pursue new rules that would safeguard our democracies."

"But the law has to be strong and its enforcement firm. Otherwise, we will lose this once in a generation opportunity to align the future of technology and democracy," she continued.

Haugen, who was a product manager on Facebook's civic misinformation team, urged EU lawmakers to expand the DSA to include online content violating a platform's terms and conditions, and to force platforms to assume responsibility for risks beyond the dissemination of illegal content — such as election manipulation or disinformation about mental health dangers.

Haugen also warned legislators in Brussels not to exempt news media content when drafting new laws because such outlets could still fall prey to disinformation campaigns.

Haugen told EU lawmakers that by strengthening the rules of the road for companies like Facebook and Google, they could "create a game-changer for the world, you can force platforms to price in societal risk to their business operations so the decisions about what products to build and how to build them is not purely based on profit maximization."

"And you can show the world how transparency, oversight and enforcement should work," she added.

EU lawmakers on tech legislation: 'Speed is everything'

Commenting on increased EU lobbying efforts by tech companies as lawmakers draft not only DSA legislation but also the Digital Markets Act (DMA) that clearly lays out rules of operation for global tech companies, European Commissioner for Internal Market Thierry Breton said: "Speed is everything. We need the DSA/DMA package adopted in the first half of 2020."

The European Union has been much quicker to attempt to reign in tech giants than politicians in the US, where those companies are based.

Though the US has taken steps to crack down on big tech of late, lawmakers there have so far appeared loath to hinder US firms when it comes to competing in the global arena.

European lawmakers have been far more proactive in demanding companies act more forthrightly in disclosing their algorithms, for instance.

"The fact that Facebook is disseminating polarizing content more than other kinds of content is something that people like me have been saying for years," said Green Party EU parliamentarian Alexandra Geese. "But we didn't have any evidence to prove it," until Haugen came forward, Geese added.

That interest in algorithms is part of the EU's push to create more transparency as to how artificial intelligence used by companies like Facebook makes recommendations on what content people see.

"It's rather about looking under the hood and regulating the kind of mechanisms that a company, a platform, established to disseminate content or to direct people down rabbit holes into extremist groups," said Geese.

Before Haugen met with lawmakers Monday as part of a larger European tour to discuss her recent revelations about the nefarious activities of her former employer, Facebook preemptively addressed the subject itself.

In denying the company put profits over people, global policy management head Monika Bickert wrote: "Contrary to recent claims about our company, we've always had the commercial incentive to remove harmful content from our platform."