EU negotiators have approved a directive protecting whistleblowers who report issues such as fraud and tax evasion by authorities or corporations. Germany backed the provision despite criticism from other countries. 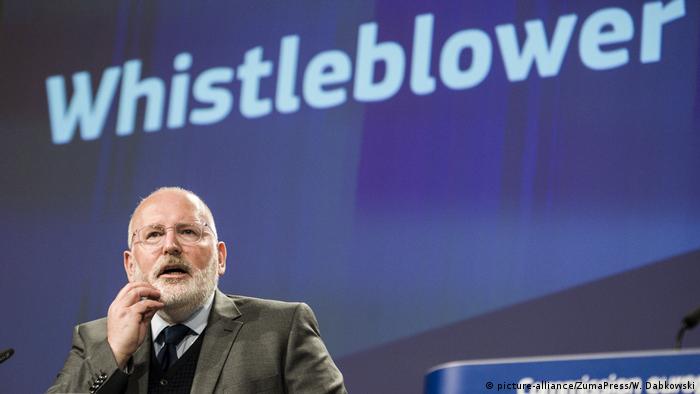 EU negotiators in Strasbourg on Tuesday passed a law that protects European whistleblowers who report breaches of EU law, including fraud, tax evasion or data breaches.

The EU Commission proposed a "whistleblower protection directive" in April 2018, citing scandals like Dieselgate, the Panama Papers or the Cambridge Analytica data breach, which were uncovered by whistleblowers.

Read more: MEPs launch “EULeaks”, a platform for whistleblowers within the EU

"Whistleblowers deserve support and protection from the moment they decide to blow the whistle," said the Commission's Justice department. "Great news that we have approval for EU-wide rules on whistleblower protection."

Legal issues involving whistleblowers in the EU are currently handled through the judicial system of individual countries. By creating an EU-wide standard the Commission said that "safe channels for reporting both within organizations and to public authorities" will be established.

The lead negotiator, French MEP Virginie Roziere, said on Twitter Tuesday that negotiators had to "battle for the final text" of the law to "live up to the expectations of citizens."

"Our work was to identify the states which opposed external channels and make them stand up to their responsibilities before citizens and NGOs," she wrote.

In negotiating the details of the law, Luxembourg, Ireland and Hungary wanted tax issues to be exempt from the whistleblowing protection regime, but Germany, France and Italy insisted that they be included.

Details of the law include protection mechanisms like clear and confidential reporting channels within and outside of organizations.

The directive will establish a three-tier reporting system encompassing internal reporting channels, reporting to competent authorities and channels for reporting fraud to the media in case "no appropriate action" is taken, or in case of "imminent or clear danger to the public interest or irreversible damage."

The directive also forbids "all forms of retaliation" against whistleblowers and would provide access to "free advice and adequate remedies," in such cases.

Transparency advocates in Europe have criticized the lack of legal protection for individuals who report fraud. Such cases include the 2012 prosecution of two whistleblowers in Luxembourg who leaked information about corporations conducting illegal tax deals.

The whistleblower advocacy group, Whistleblowing International Network, said on Twitter after the law was announced that "whistleblowers in Europe have a fighting chance to survive when they speak up for our interests & for our democracy."