What to expect from the upcoming Xi-Ma summit

In a historic step, the presidents of China and Taiwan have agreed to hold their first ever summit. DW examines the potential impact of the meeting on cross-strait relations. 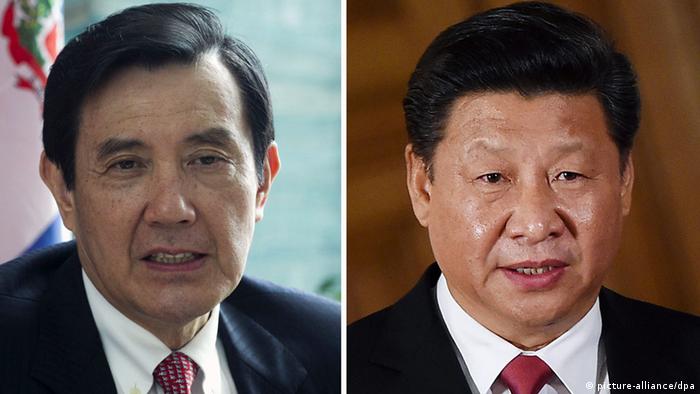 The highly symbolic meeting between Taiwan's President Ma Ying-jeou and Chinese leader Xi Jinping is scheduled to take place in Singapore on November 7.

The summit will be keenly watched across the world for any hints as to the direction of the bilateral ties. The leaders of the two sides have never met since Taiwan split from mainland China in 1949 after forces of the Chinese Nationalist Party, or Kuomintang (KMT), fled to the territory following their defeat in a civil war with the Communist Party of China (CPC).

China has since refused to recognize Taiwan as a nation, regarding it only as a renegade province and claiming sovereignty over it. Beijing also threatens to take military action against the island should Taipei declare independence.

President Ma came to power in 2008 promising that better relations with China would lead to increased prosperity. The Taiwanese leader has since pursued policies of rapprochement with Beijing, and economic linkages between the two sides have grown rapidly, with bilateral trade surpassing $198 billion last year, according to Chinese government data. 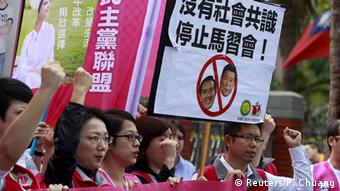 Although commerce and tourism have boomed during Ma's term, Taiwanese voters have also grown increasingly anxious about the territory's degree of economic overreliance on the mainland. Moreover, there is a sense that trade deals with Beijing tend to favor the rich and well-off.

Taiwanese officials were quoted by CNA news agency as saying that during their talks, Ma and Xi will exchange views on promoting cross-strait peace and maintaining the status quo. But both leaders will neither issue a joint statement nor sign any agreements following their historic summit, they added.

Furthermore, in order to avoid the risk of a protocol problem over the title "president," Xinhua cited Chinese officials as saying the two leaders will call each other "Mister."

Alan Romberg, director of the East Asia program at the US-based think tank Stimson, told DW that the agenda will likely include ongoing negotiations on trade agreements and the possible reciprocal establishment of offices by the organizations that conduct much of the day-to-day business between the two sides, among other things.

There could also be discussions on security issues, including those concerning the South China Sea, the expert said. "But it is doubtful that President Ma will agree to coordinate positions with Xi on this, even though their positions are parallel in many respects," he added.

The summit comes at a critical time for Taiwan, which is heading to the polls in less than three months to elect a new president. In recent years, there has been rising public discontent with the ruling KMT - the party Ma belongs to - and its perceived pro-Beijing stance. 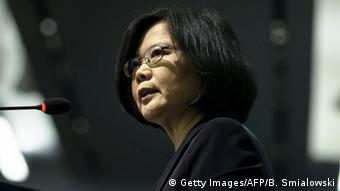 It was manifested a year ago when students occupied Taiwan's parliament building protesting against a trade pact with China, arguing that the deal would increase Beijing's economic and political clout on the island. This was followed by the ruling party receiving a drubbing in the local elections held last November.

As a result of the growing disenchantment with the KMT, many expect the opposition Democratic Progressive Party's (DPP) candidate, Tsai Ing-wen, to win the January presidential poll.

The DPP traditionally leans toward independence from China and rejects the so-called "1992 consensus," a 23-year-old agreement reached between Beijing and Taiwan's KMT affirming there is only "one China."

The consensus, however, does not define what this "one China" means, and, as a result, the concept remains ambiguous enough to accommodate various interpretations.

The leaders of China and Taiwan will take part in the first official meeting between the two since separating in 1949. Attitudes toward Beijing have created a hostile divide in Taiwan's political landscape. (03.11.2015)

Taiwan elections - A contest between women

Taiwan is set to have its first-ever female president in 2016 as both the ruling Kuomintang (KMT) and the opposition Democratic Progressive Party (DPP) have named women candidates to contest the presidential election. (19.07.2015)

Nevertheless, the existence of the "1992 consensus" and its acceptance by the KMT have allowed both sides to focus more strongly on areas such as trade and tourism, instead of continuously arguing over Taiwan's sovereignty.

"We continue to regard adherence to the '92 consensus' as the basis for developing relations with Taiwan authorities and various political parties," President Xi said in January.

But with the DPP likely to return to power next year amid growing anti-Chinese sentiment in the island, experts say Beijing may be concerned about the current situation on the island.

"Given the KMT's poor prospects in the upcoming election, China is increasingly worried that the next government in Taiwan could be made up of elements that favor declaring outright independence from the mainland," said Zhang Lifan, a Chinese scholar and independent historian.

Analyst Romberg says that a major motivation for the Ma-Xi meeting "may be to demonstrate the value of maintaining the 1992 consensus as a foundation for conducting mutually beneficial cross-strait relations." Both leaders, however, will need to take care not to leave an impression that Ma is yielding anything to Beijing regarding Taiwan's status, he stressed.

Minor political parties and several civil society organizations have already protested against the scheduled meeting, criticizing the secrecy surrounding the visit. The DPP has also questioned the timing and justification of the summit, arguing that it "gives the impression of a political maneuver" as it comes in the midst of an ongoing presidential election campaigning

Presidential frontrunner Tsai Ing-wen also lambasted the planned meeting saying she felt "very surprised" by the announcement. "A meeting of the leaders of the two sides across the strait is a great event, involving the dignity and national interests of Taiwan. But to let the people know in such a hasty and chaotic manner is damaging to Taiwan's democracy," she said. 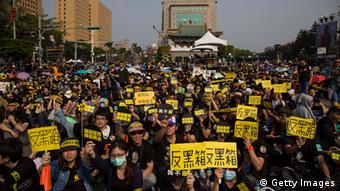 "The DPP will obviously criticize the summit as Ma's secretive attempt to insert the mainland into the presidential election and yield Taiwan's sovereign independence to Beijing," said analyst Romberg.

At the same time, he noted, the KMT will assert that it has yielded nothing in these respects, but rather consolidated peace and stability by implementing Ma's formulation of the 1992 consensus as "one China, respective interpretations."

Given the criticism among sections of Taiwanese population, experts say the effect the Ma-Xi meeting will have on bilateral relations and public sentiment will depend on the handling of protocol aspects and the achievement of substantive outcomes.

On the question of whether the leaders' talks would influence the upcoming presidential election, analysts say it is unclear how this will impact the political campaign. "That depends on how successful the DPP and the KMT are in persuading voters about their interpretation of the meeting," said Romberg.