What role did Cambridge Analytica play in the Brexit vote?

The whistleblower at the heart of the Facebook scandal believes the UK wouldn't have voted for Brexit without Cambridge Analytica's intervention. DW looks at the ties between the Brexit campaign and consulting company. 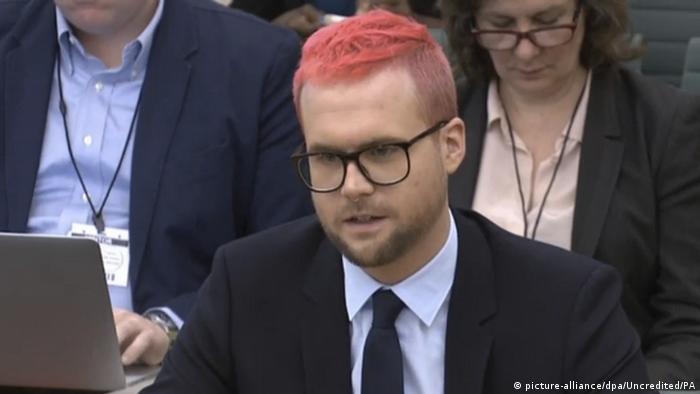 The Vote Leave campaign has claimed that the payment to the smaller group, known as BeLeave, was a donation and that each group worked independently from one another.

However, documents leaked last weekend by whistleblower Shahmir Sanni, showed that the Vote Leave and BeLeave were effectively the same entity, with the latter even located inside the former's offices.

Wylie said on Tuesday that BeLeave, which was founded by 22-year-old fashion student Darren Grimes, was effectively used as a money laundering vehicle.

Campaign finance records showed that BeLeave spent the 625,000-pound donation on services from AIQ just days before the referendum vote.

Wylie said that the official campaign's "cheating" may well have swayed the EU referendum result given the effectiveness of AIQ's online campaign.

Overall, various pro-Brexit group spent 3.4 million pounds for AIQ's services during the EU referendum campaign. Some 2.7 million pounds of that money was spent by Vote Leave, making up 40 percent of the group's campaign budget.

However, Wylie said he was "absolutely convinced" Vote Leave also worked with other groups to circumvent campaign spending rules.

"I am absolutely convinced that there was a common plan and common purpose with Vote Leave, BeLeave, the DUP, and Veterans for Britain. All of these companies somehow, for some reason, all decided to use AIQ," he said. "When you look at the accumulation of evidence, I think it would be completely unreasonable to come to any other conclusion other than this must be coordination, this must be a common purpose plan."

Officials from AIQ and Cambridge Analytica have denied the two companies coordinated during the Brexit referendum.

However, Wylie told the UK parliamentary committee that AIQ, which he says he helped create on behalf of SLC, the parent company of what would eventually become Cambridge Analytica, frequently shared data with one another during the EU referendum campaign.

"You can't have targeting software that doesn't access the database. Cambridge Analytica would have a database and AIQ would access that database, otherwise the software wouldn't work," Wylie said.

Wylie also said that AIQ, when it was set up, inherited Cambridge Analytica's total disregard of the law.

Facebook boss Mark Zuckerberg on Tuesday said he would not appear before the British parliamentary committee to explain how the profiles of some 50 million users were harvested by Cambridge Analytica.

Committee chairman Damian Collins urged Zuckerberg to reconsider, given the seriousness of the allegations.

"We'd be very happy to invite Mr Cox to give evidence. However we would still like to hear from Mr Zuckerberg as well," Collins said at the start of Wylie's committee hearing.

Facebook insists it didn't know that Cambridge Analytica had harvested data from millions of users through an app, which was subsequently leveraged by Donald Trump's presidential campaign team.

A row has broken out in India between Modi's BJP party and the opposition INC over the prime minister's alleged misuse of data. An anonymous hacker claims Modi's official app shared users' data without consent. (26.03.2018)