Large whales have swum up a tidal Australian river notorious for its crocodiles. At least one humpback remains and Kakadu National Park rangers are hoping it will return to the open sea. 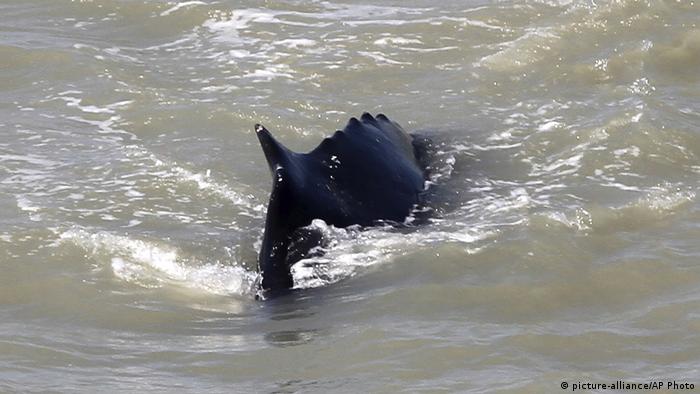 Australian ecologists said they had been baffled by the appearance of migrating humpback whales in a crocodile-infested river in the Northern Territory.

The presence of whales in the tropical inland region was previously unheard of, even among local Aboriginal elders. Now they think the marine giants simply took a wrong turn.

Only when the two adults and younger whale had surfaced to breathe were onlookers able to see them, because the water visibility was "zero," Fowler added.

It's now thought that only one humpback — thought to be at least 10 meters (33 feet) in length — remains, with the others having found their way out and back to sea.

"It's quite shallow and we're all pretty keen to try to get this guy out," said whale scientist Carol Palmer, referring to noise-making to attract or drive the creature back to sea.

"The humpback whale is large enough that none of us think that the crocodiles are going to try to have a go at the humpback."

The East Alligator River — actually a misnomer because Australia has crocodiles, not alligators — is tidal, and the park authority said for public safety any collisions between boats and the whale "where crocodiles are prevalent" must be avoided.

An exclusion zone has been declared from river's mouth to a point 30 kilometers upstream, said the park's authority.

Fowler speculated that the whales could have originated from a booming humpback population off western Australia.

"There are many humpbacks heading up the W.A. (Western Australia state coastline)," said Fowler. "They're bound to end up in new places.

"What's incredibly weird is the fact that they're up a muddy, shallow river full of crocodiles — that's unheard of," Fowler said.

The protected Kakadu National Park lies southeast of Darwin, the hub of Australia's Northern Territory, and is renowned for its unique animal and plant life. The World Heritage area has been home to its Aboriginal people for 65,000 years.

Swimming has been banned in a stretch of Germany's Unstrut river after multiple witnesses reported seeing a crocodile nearby. Emergency services have been searching for the animal since Friday.

A lake in southern Germany has been closed to swimmers and walkers after a possible crocodile sighting. The closure comes as swimmers may be tempted to cool off during soaring temperatures next week.