Were mere copies of Iraq’s national treasures destroyed? | Middle East | News and analysis of events in the Arab world | DW | 11.03.2015 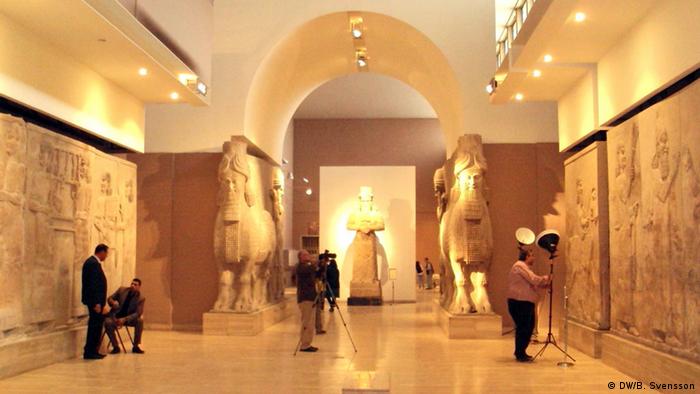 Now, more than ever before, the National Museum of Iraq in Baghdad is a magnet for crowds. It just re-opened at the end of February, only few days after the terrorist group Islamic State (IS) had posted a video on the Internet in which militants are seen using hammers to destroy Assyrian statues and artifacts in the Mosul Museum. Many people come to Baghdad's National Museum to see what has been left of Iraq's cultural treasures.

Whoever asks museum attendant Haytham questions about the IS video is given the surprising response, "They didn't destroy the originals in Mosul; those were just copies." The originals are here, says Haytham, and points to the giant reliefs and statues, winged bulls and gatekeeper figurines from Nimrud, Hatra and Khorsabad. Many other cultural artifacts can be found in foreign countries, Germany included. 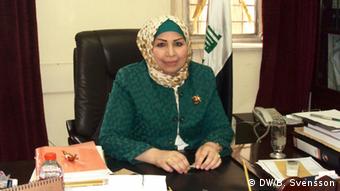 Fawyze al-Mahdi is the director of Iraq's antiquities administration

Fawzye al-Mahdi, who heads the antiquities authorities and is in charge of Iraq's cultural heritage, confirms this to a large extent. She sits in a modest office in the hall of the administration offices located on one of the museum's side wings. She has scrutinized the Internet video, says the petite woman with a green veil. The mask that was shattered by a hammer was made of plaster, as were the statues. "None of the artifacts destroyed in the video was an original," she said.

But the terrorist group has probably stolen small clay figures, emblems made of oak, and other valuable objects. They smuggled them out of the country and sold them, says Fawzye al-Mahdi. No one can say what has been destroyed in the process. Seven objects from the Mosul Museum have even been found in Germany. According to media reports, a correspondent of the state television station Al-Iraqia has been given a list of that objects that were to be sold on the art market.

The head of cultural heritage recounts how Mosul Museum employees fled to Erbil or Dohuk in the Kurdistan Region of Iraq when IS troops captured Mosul last June. The new leaders emptied the museum's glass cases one by one and plundered the works in storage, where actual originals were housed.

It breaks her heart to see the IS militants blindly destructing Iraq's cultural treasures, says Fawzye al-Mahdi. Their war on idolatry – the attempt at a justification for these actions - cannot be justified.

Time and time again, cultural and artistic works have been destroyed during the long history of Mesopotamia, asserts the head of the antiquities authorities. The highly developed civilization, the wealth of water resources and trade routes had always made Iraq a desirable place. "All our neighbors wanted to possess us," she says.

Dominating forces repeatedly tried to destroy the past. She carefully chooses to use the term "dominating forces" and not "conquerors" or "occupying forces." Sometimes the damage was minor and only the sculptures' heads or noses were chipped. But even in recent times, respect for Iraq's cultural heritage has been lacking, complains Fawzye al-Mahdi. Saddam Hussein's wars caused a great deal of destruction. And even the US-led "Coalition of the Willing" used heritage sites as military camps. 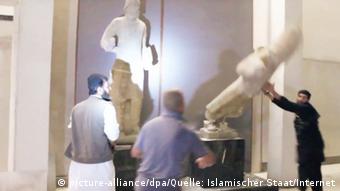 An IS propaganda video showed the destruction of artifacts in Mosul

That is why people find very few original pieces among the ruins of the ancient city of Babylon, for example. The Ishtar Gate is a duplicate, as is King Nebuchadnezzar's Palace. Even in the Assyrian ruins destroyed by the IS in Hatra, Nimrud and Khorsabad, not all the cultural treasures were originals. The administration of the National Museum, however, owns precise plans and drawings of the former sites so that they can be rebuilt at a later point in time. You would have to be on site to be able to quantify the cost of the damages. Right now, the director does not attempt to take stock of the damages.

She sees the return of stolen and exported art works as the greatest problem at the moment. Cooperation with foreign countries is abysmal. Little of the loot has been returned, says Fawzye al-Mahdi. For one thing, border checks for countries neighboring Iraq or for western countries are insufficient. And also, the black market for stolen art works is booming. Furthermore, UNESCO, committed to international cultural heritage preservation, has no effective way of stopping the illegal trade of artifacts, which is becoming all the more tragic.

She emphasizes that she is not criticizing archeological excavation teams who have legally exported Iraqi cultural treasures because of contractual agreements. She is not asking for these works to be returned, quite the contrary. She states, "We should be glad that the most important relics of our past are well-protected in foreign museums when considering the barbarism we are currently experiencing."

The IS troops did not only target their rage towards the Mosul Museum but also the excavation sites themselves. Kurdish sources from the province Nineve indicate that millennia-old ruins have been razed to the ground. IS troops drove bulldozers over the cultural sites.

As militants destroy ancient treasures in Iraq and Syria, Berlin museum director Markus Hilgert calls on the international community to share their know-how and change their view of socially acceptable art collections. (10.03.2015)

With the destruction of antique works of art, the "Islamic State" is attacking Iraq's national identity. The works are an expression of the very thing the IS hates the most, says DW's Kersten Knipp: cultural diversity. (10.03.2015)

"Islamic State" fighters have looted and bulldozed the ancient Assyrian city of Nimrud in northern Iraq. UNESCO condemned this act of destruction as a war crime. (06.03.2015)

Opinion: Gambians use their marbles to vote for stability