"Islamic State" fighters have looted and bulldozed the ancient Assyrian city of Nimrud in northern Iraq. UNESCO condemned this act of destruction as a war crime. 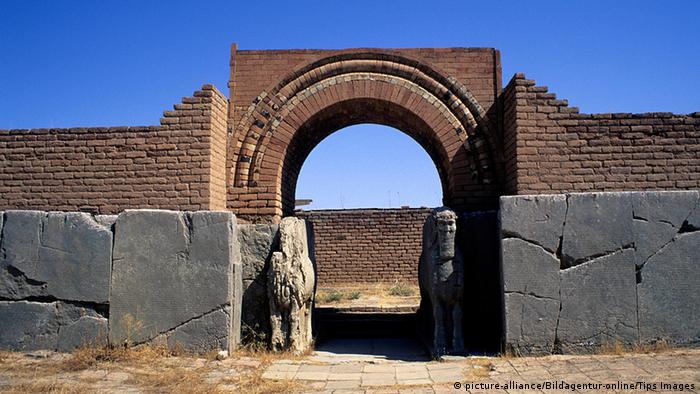 The historic site before the attack

"Islamic State" militants drew condemnation on Friday from both Iraqi officials and UNESCO for the deliberate destruction of historically significant sites this week.

The extremist fighters "assaulted the ancient city of Nimrud and bulldozed it with heavy machinery, appropriating the archeological attractions dating back 13 centuries BC," Iraq's tourism and antiquities ministry said.

A tribal source also confirmed the attack: "There used to be statues and walls as well as a castle that the Islamic State has destroyed completely."

The destruction of the ancient Assyrian city of Nimrud in northern Iraq, about 20 miles (30 km) south of Mosul, is the latest assault on some of the world's greatest archaeological treasures committed by the terrorist group.

Last week, a video showed IS fighters smashing statues from pre-Islamic times with sledgehammers and drills in a museum in Mosul. Many of these artifacts were from Nimrud. The video also showed the jihadists damaging a huge statue of a bull at the Nergal Gate into the ancient city of Nineveh. IS militants regard statues and religious shrines as false idols that have to be destroyed.

"The deliberate destruction of cultural heritage constitutes a war crime and I call on all political and religious leaders in the region to stand up against this new barbarity," the Director General of UNESCO Irina Bokova said in a statement on Friday.

Nimrud, the ancient capital of Assyria, is one of the most famous archaeological sites in the region. Guards and officials have not yet been able to assess the extent of the damage inflicted on the site by the jihadists.

Opinion: Baghdad must stand united against the demon of IS

The Iraqi army is standing at the gates of Tikrit to defeat "Islamic State" terrorists. But the war cannot be won by military means alone, writes Kersten Knipp. It requires a political solution. (04.03.2015)

Iraq's offensive to recapture Tikrit from IS 'gaining ground'

Iraq says its forces have closed in on the city of Tikrit in a fierce battle to stop the advance of the "Islamic State" (IS). Baghdad's biggest operation so far against the jihadist group is said to be making progress. (03.03.2015)