Climate change has increased global water security issues and made society more vulnerable to natural disasters, according to a new report. International efforts are necessary to curb the most devastating effects. 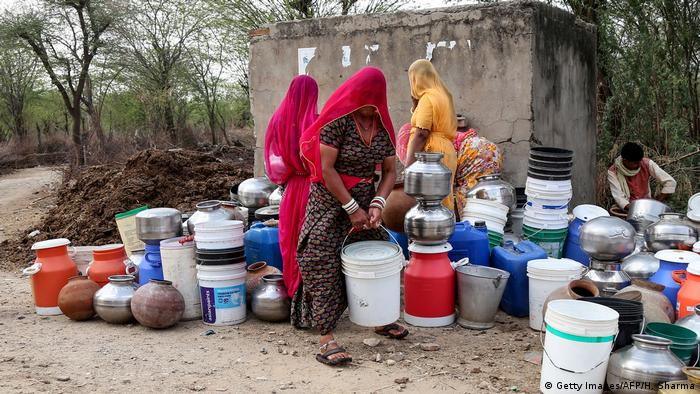 Securing access to clean water and protection against flooding and tsunamis is critical to safeguarding society against the effects of climate change, according to the 2019 World Risk Report published Thursday by the Institute of International Law of Peace and Armed Conflict at the University of Bochum.

“Politicians have to act swiftly in developing countries, in particular, to ensure all households have access to clean water,” said Peter Mucke, managing director of Entwicklung Hilft, the coalition that conducted the study. "After instances of extreme weather, the water supply needs to be restored quickly in order to ensure survival and prevent the spread of disease."

Poor families are particularly affected by water shortages. Many do not have running water in their homes and instead send their children to collect it from public stations. This often costs money, meaning the poorest are paying the most for water. It also keeps their children from attending school.

Tropical islands most at risk

The report identified Oceania, Southeast Asia, Central America, and West and Central Africa as regions at high-risk of natural disasters. It also found that higher risk was closely linked to poverty and inequality.

The tropical island countries Vanuatu, Antigua and Barbuda, and Tonga were the nations most at risk to natural disasters like earthquakes, hurricanes, and rising sea levels. The risk for Vanuatu and Tonga has gone up since last year. Qatar and Malta rank as the countries facing the least at risk, the study found.

But the study also pointed out that a high threat of natural disaster does not necessarily put a country higher on the risk ranking. Rising sea levels present a high risk for the Netherlands, for example, but the country’s overall ranking is improved by ability to cope with the potential disasters it faces.

The authors of the report called for local, national, and international initiatives  to disrupt the cycle of danger and vulnerability present in the most affected countries.

"Without the will of international society to uphold the Paris Climate Agreement, local initiatives like planting mangrove forests to contain coastal erosion or early warning systems and evacuation drills will have only limited success," the authors wrote.

After carving a path of destruction across the Bahamas, a weakened Hurricane Dorian crawled along the coast of the southeastern US, flooding roads and unleashing tornadoes. It made US landfall as a Category 1 storm. (06.09.2019)

Drought forces the Netherlands to adapt to climate change 16.08.2022

The Netherlands is normally one of the wettest countries in Europe. But this summer, it's also battling a prolonged drought and water shortages. With a third of its land below sea level, the Netherlands is particularly vulnerable to climate change.