Middle East conflicts account for more than half of the 8.6 million people displaced by fighting in 2015, according to a new report. The total number of internally displaced people has jumped to a record high. 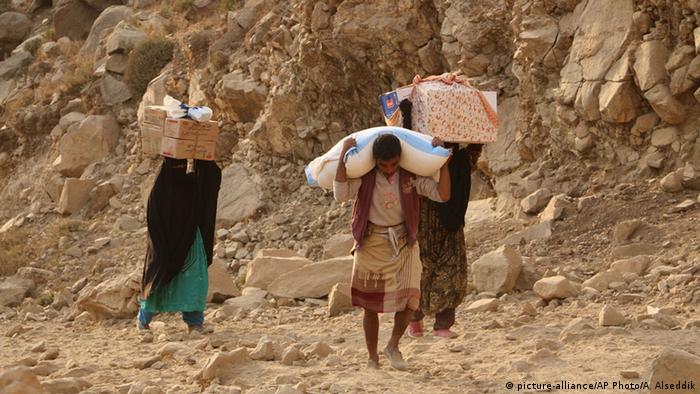 The number of internally displaced people rose to a record 40.8 million people in 2015, according to a joint report released Wednesday by the Norwegian Refugee Council (NRC) and the Geneva-based Internal Displacement Monitoring Centre (IDMC).

"This is the highest figure ever recorded, and twice the number of refugees worldwide," said Jan Egeland, the NRC's secretary-general.

There were 8.6 million people newly displaced within borders last year, nearly half from conflict zones in Iraq, Syria and Yemen, the report said.

"As the world's attention focused on the flow of refugees out of the region, millions were displaced internally in the Middle East, more than in the rest of the world combined," said Carsten Hansen, NRC's regional director in the Middle East.

The number of internally displaced in Syria and Iraq increased by 1.3 and 1.1 million, respectively, adding to the millions already forced from their homes in those long-running conflicts.

Yemen was hit the worst, with "a staggering 2.2 million forced to flee their homes as a result of the Saudi-led airstrikes." Saudi Arabia and allied Gulf states launched a military operation and economic blockade against Houthi rebels in Yemen last year, creating a humanitarian disaster.

The more than 1 million refugees who reached Europe last year were just the tip of the iceberg of global displacement, which internally can simmer for years before bursting beyond borders.

"While richer, stable countries have been scheming to keep asylum seekers out of their borders and deny them protection, millions remain trapped in their own countries with death staring them just around the corner," Hansen said.

Five countries - Colombia, Democratic Republic of Congo, Iraq, South Sudan and Sudan - have been among the top 10 countries with displaced people for more than a decade.

"This is further evidence that in the absence of the help displaced people need, displacement tends to drag on for years and even decades," said IDMC Director Alexandra Bilak.

Kenyans: ‘We still have IDPs to this day’

It was what Kenyans had waited for with bated breath. Would Deputy President William Samoei Ruto’s trial in The Hague continue or would he be free at last? This is how Kenyans reacted to the news of the mistrial. (06.04.2016)