Armed Conflict Survey: In 2015, Syria accounted for one-third of global conflict deaths | World| Breaking news and perspectives from around the globe | DW | 05.05.2016

This year's edition of the Armed Conflict Survey has been released. DW's Matthias von Hein spoke with its editor about the rise of foreign fighters and how climate change could stoke conflicts around the globe. 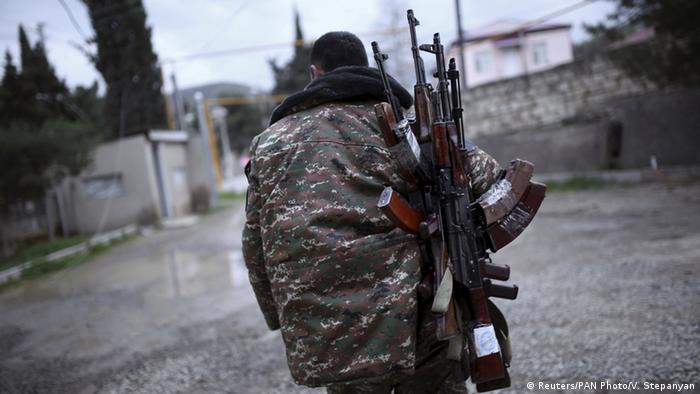 Deutsche Welle: This is the second edition of the armed conflict survey. What is the most important development highlighted by this new report?

Conflict deaths also rose massively in Turkey, Yemen and Egypt. So in the Middle East, we judge that the prospects for resolution or de-escalation of conflicts grew more distant in a few conflicts and no closer in conflicts like Iraq, the Palestinian territories, and Lebanon.

In terms of other broader developments, we saw displacement a factor in the battle against ISIS (or IS, an acronym for the "Islamic State"), because the group lost territory in Syria and Iraq, for example, but it increased its presence in Libya. One of the difficulties we will highlight facing IS - particularly in Libya - is that its fighters there are seen as outsiders, and society lacks the divisions on which the jihadists have fed in Iraq and Syria. Yet the group's success in reinforcing some of the territory in Libya - for example, Sirte, and holding the city - testifies to its determination and resources.

What can we expect in terms of the risk posed by foreign fighters returning to their countries of origin, such as Belgium or France?

We have seen improvements, for example, in the capability and vigilance of Western security services. We have also seen that some foreign fighters die, and some do not want to carry out terrorist attacks when they return to their home countries. So we shouldn't assume that the high presence of foreign fighters will automatically translate into their carrying out terrorist attacks in Europe. 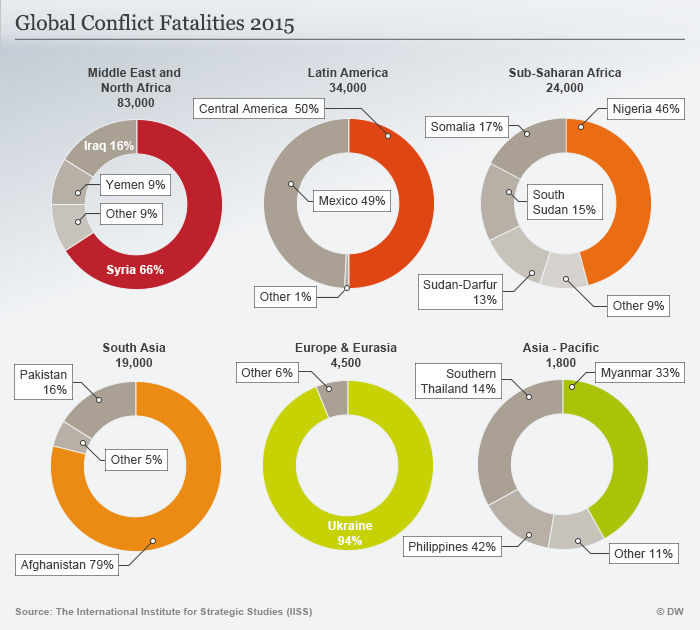 The last edition of the Armed Conflict Survey covered 42 conflicts around the world. This newest edition deals with 37 conflicts, a slightly smaller figure. Does this suggest a slightly more peaceful situation worldwide?

Not really. The North African region and the Middle East regions are still as distant from resolution as they were in 2014. The situation in Central America and Mexico is also particularly gloomy: The level of fatalities there rose year-on-year. One of the very few bright spots globally is perhaps Colombia, which has achieved considerable de-escalation of conflict and progress in the resolution of its conflict with the Revolutionary Armed Forces of Colombia (FARC). But even there challenges remain on the long road to peace.

Last November saw the signing of a climate agreement with the aim of mitigating climate change, but climate displacement is happening already, and within the next 10 to 15 years it might increase massively, with millions of people being displaced. What does this mean for international security?

Global displacement of people by unresolved conflict and by global disasters of all kinds is a challenge of global proportions. According to our analysis, adding the number of refugees to those displaced by disasters and disease would reach an estimated 60 million. This number continues to rise quite dramatically.

This year's survey focuses more on urban conflict and its effect on the civilian population. But combined with the effects of unresolved conflicts and displacement caused by conflict, global disasters will continue to have a significant impact on the world population. Hopefully, the deal on climate change can contribute to improving the situation, but I don't think it will lead to any significant reduction in global displacement numbers, given the number of unresolved conflicts. 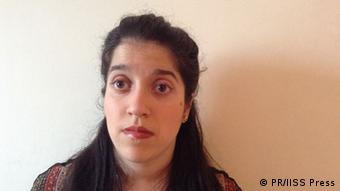 What do you mean by urban conflict?

We are investigating the extent to which armed conflict is increasingly taking place in cities. For example, mega cities increasingly act as hubs for terrorist groups. The number of refugees living in cities as opposed to rural areas has increased quite dramatically in recent years. A lot of the fighting worldwide, including most noticeably perhaps Turkey and Ukraine, has been shifting to cities. So it's those kinds of areas that we try to analyze and investigate. As a result, we have quite a lot of data on things like the most violent cities in the world.

Which are the most violent cities in the world?

The vast majority of the most violent cities are in Latin America, according to our data, which suffers massively from organized crime and systemic conflict.

This interview was conducted by Matthias von Hein. It has been condensed for clarity.

'No salvation in war,' says returning IS fighter

Hundreds of fighters from the Balkan states are in Syria at the moment. DW's Lindita Arapi met up with one of the Albanian fighters who's returned from the war and finds out about the brutal realities of jihad. (04.05.2016)

Colombia: Are the country's media advocates for peace?

In 2015, progress was made on a peace accord between the Colombian government and the FARC rebels. What role do the Colombian media play in advancing peace efforts? Media experts in Berlin discussed the challenges. (24.03.2016)