Warm reception for refugees in cold Berlin | Germany | News and in-depth reporting from Berlin and beyond | DW | 25.01.2016

Every day, hundreds of refugees arrive in Berlin by train. Many have risked their lives to get here. Their first impression of the German capital is far from glamorous, reports Kate Katharina Ferguson. 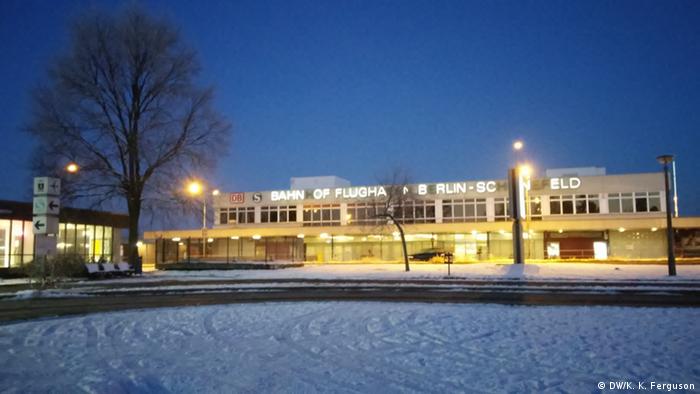 Every morning at around 9 o'clock, a train carrying hundreds of refugees arrives at Berlin's Schönefeld Airport from Freilassing, a Bavarian town a day's journey to the south, near the Austrian border. As soon as it pulls in, the passengers are taken to an abandoned station building where they encounter three groups of people: German soldiers; representatives of LaGeSo, the body that registers new arrivals; and volunteers, like me.

I've come back this time wearing my journalist's hat. I need it. Berlin winters are famously harsh, and this January morning is no exception. I arrive just in time to watch the sun rise over the snowy airport grounds.

At the entrance to the station hall I pass a row of pink portable toilets. They are one of the first things refugees see when they arrive in the German capital.

Over the past few months, a kind of ritual has developed in the station hall in the hour before the train arrives. On one side, volunteers and soldiers make sandwiches and unload shopping trolleys full of bananas. On the other, they arrange a children's play area and baby changing facilities. 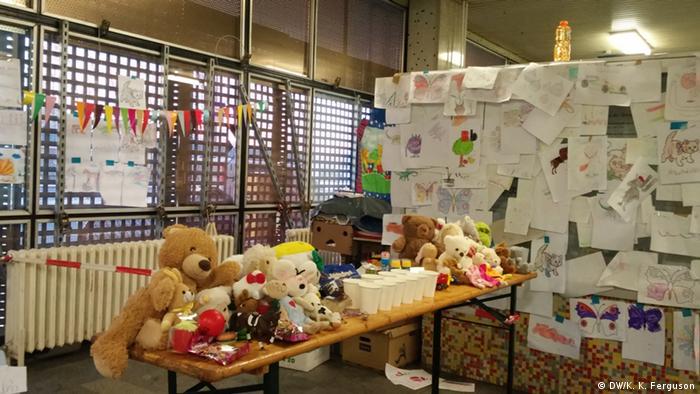 Calm before the storm

It's coming up to eight o'clock and, as usual, Stefan Pauly is spreading cream cheese on wraps and seasoning them with za'atar, a spice mix common in Middle Eastern cuisine. The journalist-turned-student has been coming here almost daily since September. "My local bakery gives us the bread for next to nothing," he says.

Some 46,000 refugees have passed through the station since Stefan began volunteering here. That's given him plenty of opportunity to observe the system. "People are transported from A to B like goods. They don't get a say."

On the other side of the room, a young woman is arranging teddy bears in the play area. Nadine Sawicki has travelled here from Manchester, where she is a student of fine art.

"I flew in yesterday," she says. "I heard there were a lot of refugees in Germany and I found out about this initiative on Facebook."

I couldn't help wonder what had spurred her to leave her own country to help refugees in another.

"It was the picture of the little Syrian boy washed ashore," she says.

Nadine, who speaks fluent Arabic, has booked herself into a hostel for a week so she can help refugees in Germany.

My conversations with both Pauly and Sawicki take place in the few moments of calm before the train arrives.

Then, as happens every morning, a man pokes his head into the hall and shouts, "It's here!"

First in are two elderly men. They look forlorn as they enter the grubby station hall.

Pauly springs into action, inviting them over to have some bread and bananas. They take some and nod appreciatively.

Dozens more follow. All look exhausted. Children tail their parents shyly, reaching out for a sandwich only when encouraged. Many of the adults hold babies in one arm and plastic bags containing their possessions in another. It's a struggle for them to free up a hand to take a piece of fruit. 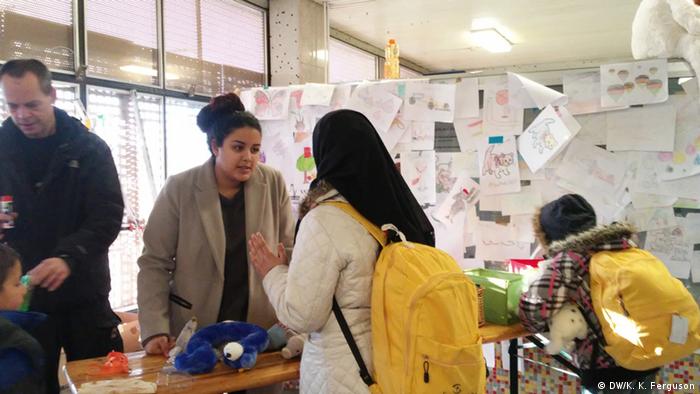 When everyone has got a sandwich, I take some of the children to the play area. Sawicki is handing out stuffed animals, yoyos, pens and whatever else we could root out from the donations.

But there's not enough of everything to go around. I watch Sawicki explain to a little boy gesturing excitedly for a racing car that we have none left.

Nearby a little girl is transfixed by a toy phone. She presses buttons wildly and holds it close to her ear. I take out my own mobile phone and pretend to call her. She doesn't notice but it elicits a broad smile from her mother.

I know from experience that now is the time to start supplying people with clothes. I've been told to scan the room for children in need of shoes.

A man points to his wife's shoes and holds his nose: She's clearly been wearing the same pair for weeks. A mother wants a winter jacket for her toddler; another little boy needs a pair of trousers. A girl points to her feet and a woman shows me her torn jacket. I race to the storage area. The donations have been sorted carefully. Still, it's not possible to get everyone what they need.

Time is of the essence. When I return, people are already being lined up to board the buses. 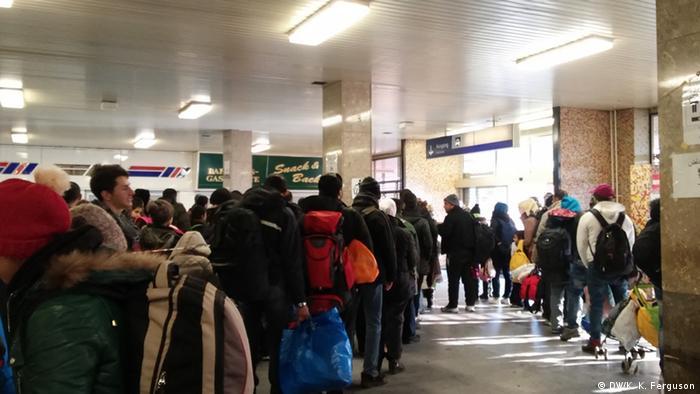 I manage to get a few garments to the people who need them. A father who requested tights for his little girl watches helplessly as she cries inconsolably at the pair I wave in front of her.

Moments later, the hall is empty again. The buses drive off, taking the refugees either to shelters in Berlin or Eisenhüttenstadt near the Polish border.

For the next few months, these shelters will become the closest to anything they can call home.

Once they get there, like the million or so people before them, they must face the next hurdle: German bureaucracy.

In the meantime, the trains will keep arriving in Schönefeld.

Creative housing for refugees - but a cemetery?

Cities and towns in Germany grapple with finding adequate housing for refugees - sometimes with extremely bizarre results. Once again, within just a few weeks, Cologne is the brunt of bad press. (21.01.2016)

A Bavarian brings Chancellor Merkel a busload of refugees

In protest against Germany’s refugee policy, a local Bavarian administrator, Peter Dreier, has sent 31 refugees by bus from his rural district to the chancellery in Berlin. Fabian von der Mark reports. (14.01.2016)

Berlin's City Hall is in a clinch with local districts over the use of indoor sports facilities to house refugees. As the influx creates more pressure for action, critics argue that these halls are incubating tensions. (03.12.2015)