A far-right extremist who is suspected of murdering regional politician Walter Lübcke confessed in court on Wednesday.

"I shot him," the defendant said in his hourlong statement, which was read out by his lawyer at the start of the proceedings in Frankfurt.

Stephan E., 46, is on trial for the shooting of Lübcke, a member of Chancellor Angela Merkel's conservative Christian Democratic Union (CDU). Lübcke was shot in the head on his porch on June 1, 2019 and died later that night.

This apology failed to impress Lübcke's widow and two sons, who are participating in the trial as co-plaintiffs.

Prosecutors said Stephan E.'s motivations were based on his "right-wing extremist hatred of refugees." 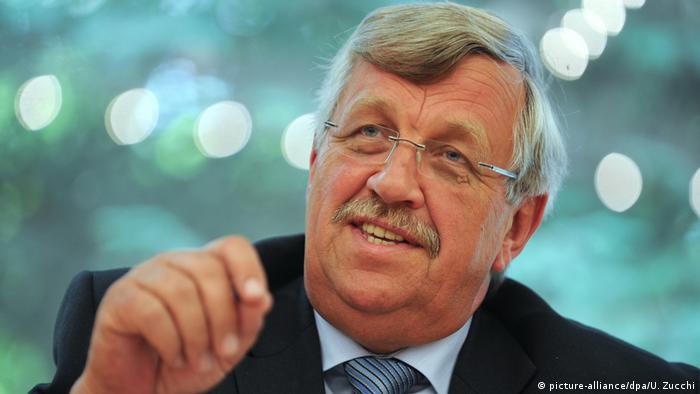 Lübcke became a target for militant far-right extremists in 2015. At the time, Germany saw a major increase in the number of migrants coming into the country, and the 65-year-old politician attracted attention as an advocate of efforts to welcome and integrate them.

A video of Lübcke at a town hall meeting in Lohfelden in which he says that anyone who did not agree with these efforts and the values behind them was "free to leave the country" was shared widely in far-right circles and drew many threats.

The statement read by the defense attorney on Wednesday was the defendant's third confession. Previously, Stephan E. had confessed twice  — each time with a different version of last year's crime.

This time, even though the defendant's words were short and clear, they were somewhat surprising. They included a mixture of his first statement to the police, in which no mention is made of his co-defendant Markus H, and a later, modified version in which he blamed H. for the shooting.

In Wednesday's statement, Stephan E. still heavily incriminated his former friend and co-defendant Markus H., but he now admitted to having fired the shots himself.

Stephan E. described what led up to that fateful night last June when Lübcke was shot on the terrace of his house in Wolfhagen-Istha, near Kassel, a city he represented as district president.

His words made the listeners shiver, describing as they did the quiet but rapid radicalization of a young man. The driving force behind this, according to Stephan E., was Markus H.

"He radicalized, manipulated and incited me," E. said in his statement. "And I let it happen to me."

According to the statement, H. procured weapons and joined E. in shooting practice in a forest. "He always spoke of civil war-like conditions that would soon prevail in Germany … how Western life in Germany must be defended against Islamization," E. said of his former friend.

Stephan E., who describes himself as a prepper and was preparing for a "civil war," said he still does not see himself as a neo-Nazi. He said he became caught up in the narrative put forward by H., who had spoken "over and over again" of the way that the "Merkel government" wanted to take away the freedom of its citizens and wipe them out.

The statement alleged that at some point during the shooting exercises in the forest, H. stuck a portrait of Angela Merkel on the target, as well as a picture of Lübcke. H. is said to have portrayed the district president as a "traitor to the people" and a "stooge of Jewish interests."

He is also said to have described Lübcke as someone "who, unlike Merkel, could be approached," which, according to E., made him an easy target for the two accused.

On the evening of the crime, the statement said,  Stephan E. met H. around 9.30 p.m., carrying a weapon in his pocket that H. had given him previously. The plan was to wait for Lübcke and confront him. At about 10:30 p.m. they allegedly arrived at the Lübcke family's house, where the two of them saw a person on the terrace and the glowing light of a smartphone.

E. described what followed in short sentences in his statement: "You threaten him with a gun; I'll beat him up, and tell him something about leaving the country," H. allegedly told him.

The use of a gun "was definitely an option," the statement said, which claimed that H. had also told E. that he should shoot if Lübcke moved. On the terrace, E. pointed his gun at the seated Lübcke "from close range," telling him "Don't move" as the district president was getting up.  He said he had pushed Lübcke back into his chair.

E. said that when the politician moved again, he pulled the trigger and told H. he believed Lübcke had been hit in the head, before the two fled the scene.

Stephan E. added that he intended to attend an exit program for right-wing extremists, and was suffering from being separated from his family. He said the fact that his daughter, now 16, no longer wanted contact with him hurt him a lot. He had always been afraid that he would not be a good father for his children , he said, adding that his own father had been an alcoholic and a thug who had attacked both his mother and him.

Due to the constant physical and mental violence in his parental home, he had suffered "psychological damage" and later panic attacks. In addition, he said, his father had beaten him and forbidden him to meet a school friend of Turkish origin.

He said his hatred of foreigners grew during prison terms for several other violent crimes, including an attack on a knife attack on a Turkish imam from the western German city of Wiesbaden in 1992. When foreign prisoners found out why he was in prison, they beat him up, he said.

After his release from prison, E.'s statement said, he attended meetings of the National Democratic Party (NPD) and other far-right extremist organizations, adding that he had left the scene after being attacked several times because of his Russian-born wife.

But, the statement said, in 2014 he had met H. at his workplace — and had succumbed to the theories of the man he called "a friend and a kind of father substitute."

Lübcke's assassination marks the first time in postwar Germany that a serving politician had been murdered by a far-right extremist.

The trial is scheduled to last through at least October.

Walter Lübcke was discovered in his garden with a gunshot wound to his head. Police said there was no indication of suicide and that they were looking for a perpetrator.