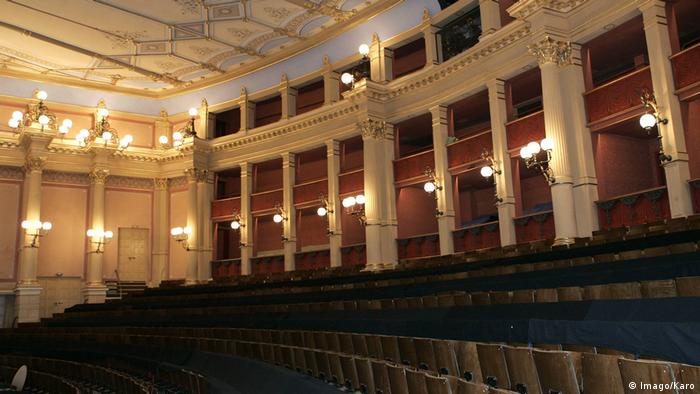 It was to be expected, but the news still came as a shock: On March 31, organizers of the Bayreuth Festival confirmed that the event, which traditionally opens every year on July 25 and runs until the end of August, would not take place in 2020. "Of course we are sad. We were particularly looking forward to an exciting new production of the Ring des Nibelungen," festival director Katharina Wagner said. "But I believe that people understand that in these circumstances such a decision was taken to protect everyone's health."

The Bayreuth Festival is an annual ritual attracting national and international celebrities, with its festive opening offering a unique chance to see Chancellor Angela Merkel in evening gown. 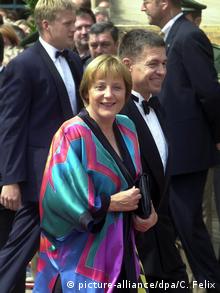 Angela Merkel was a regular visitor even before she was chancellor: here, in 2002

For opera lovers, it's more than just a festival: Heading to the Green Hill in the Bavarian town of Bayreuth is a true pilgrimage. It's definitely one of Europe's most important cultural events — especially when there is a new production of the Ring des Nibelungen opera cycle, as would have been the case this year.

The Bayreuth Festival has weathered many crises. Richard Wagner's daring project of holding a festival with his own works went bankrupt right after its first run, in 1876, and could only be revived in 1882.

The festival was also cancelled 16 times between 1882 and 1944, because of the two World Wars and the Great Depression of the 1930s.

Following World War II, the festival was paused for six more years, in an attempt to overcome its Nazi affiliations. 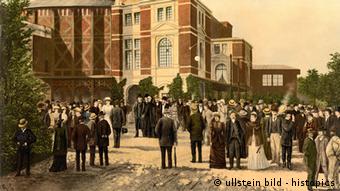 No other festival is steeped in quite this much tradition. Here, a painting from 1897

The director of the festival during the Third Reich, Winifred Wagner — the wife of Richard Wagner's son — was a friend and supporter of Adolf Hitler.

In 1951, "New Bayreuth" emerged like a phoenix from the ashes and ushered in the modern era that has shaped Germany's cultural image year after year, to this day.

Just two weeks ago, the cancellation of the summer event seemed unthinkable. Since then, "all options were discussed several times over," said director Katharina Wagner, including organizing a smaller version of the festival.

But in the end, a complete cancellation appeared to be the only acceptable option: During the festival, the mostly older audience fill night after night the 1,974 narrow seats of the famous festival hall, sitting for hours in a room without air conditioning and passageways. 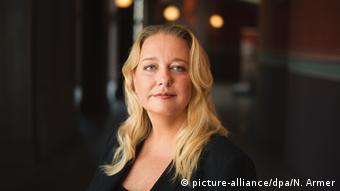 In the fourth generation: Katharina Wagner

Protecting the artists appeared to be impossible too. The staging could have been adjusted to allow singers to maintain the two-meter distancing rule on the spacious stage, but in the hidden orchestra pit underneath it, the conductor and musicians sit so closely together that their space is affectionately called the "sardine can." In the hot and airless pit, musicians usually wear shorts and light summer clothes instead of traditional orchestral suits.

During the coronavirus crisis, these beloved features of the Bayreuth Festival all spell high risks of infection.

The new Ring cycle postponed to 2022

A new staging of Richard Wagner's central work, the four-part opera cycle Ring des Nibelungen, is always a highlight of the Bayreuth Festival. As this only happens every six to 10 years, the 2020 production would only have been the 15th in the festival's history. 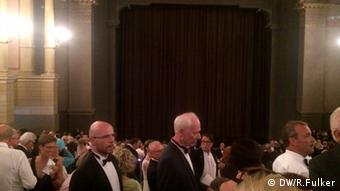 Normally after the intermission, it's back inside for hour-long performances in the sweltering heat

The new production was also highly awaited because it was entrusted to two young newcomers: Austrian director Valentin Schwarz, 31, and Finnish conductor Pietari Inkinen, 39. Rehearsals were scheduled to begin on April 1.

Now both artists have to wait at least two years for their debut on the Green Hill: The Ring cycle has been postponed to 2022.

Setting it in 2021 was impossible, explained Katharina Wagner, because the artists already had other engagements in the spring of that year, and would therefore not be available for the early rehearsals required for the mammoth staging. 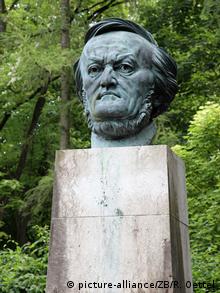 Richard himself doesn't quite know what to make of this

Therefore, next year's program is to include a reprise of productions of other Wagner operas, as well as a new staging of The Flying Dutchman — provided that the coronavirus pandemic is overcome by then.

The festival's press office stated that the financial consequences of the cancellation could not be estimated yet. For the city of Bayreuth, which hosts thousands of Wagnerians in shamelessly overpriced hotels for weeks in the summer, it will definitely mean a hard financial hit.

The Bayreuth Festival opens with Richard Wagner's "Tannhäuser." Director Tobias Kratzer told DW how he sees the play as being more about artistic aspirations than the Romantic conflict between pure and profane love. (25.07.2019)