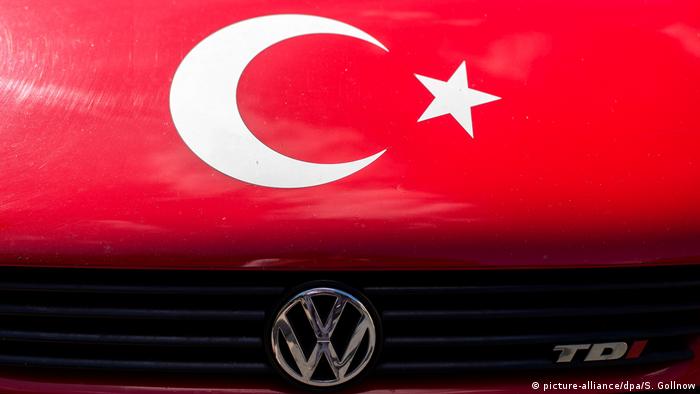 Commenting on Volkswagen's desire to open a new production facility in Turkey, media reports in both Germany and Turkey suggested last week that bilateral talks about the Volkswagen plant had reached a stage where it had become clear that the investment would be made "if there isn't a last-minute problem."

It was Turkey itself that created that last-minute problem when its armed forces assaulted Kurdish fighters across the border in Syria after US troops moved out of the way.

It's now become clear that the US administration is serious about its threat to hurt the Turkish economy by announcing a first round of sanctions. US President Donald Trump said Monday he was suspending negotiations on a $100 billion (€90.7 billion) trade deal with Turkey and intended to raise steel tariffs back up to 50%. He also imposed sanctions on a number of senior Turkish officials and ministries.

The German government, too, has made it clear how much it disapproves of Turkey's military activities in Syria.

It's in this context that Volkswagen confirmed Tuesday its executive board had postponed a final decision on its planned investment in Turkey, with a spokesman for the company adding that the carmaker "is carefully monitoring the situation and is concerned about current developments."

The German carmaker, which had previously also considered making the investment in EU member country Bulgaria, had been expected to officially announce its decision in favor of Turkey soon. Media reports said the negotiating partners had been able to sort out some remaining issues, above all related to tax arrangements for the cars to be sold.

Announcing such a decision right now would gravely taint the carmaker's image. But experts have little doubt that VW's general preference for the Turkey project will stay intact despite the current political turbulence.

Erdal Yalcin from the University of Applied Sciences Constance told DW in an earlier interview that Turkey was able to score with its low production costs. "Also, wages are low, with minimum wage reaching only €420 per month — less than in Bulgaria."

"Turkey has a very solid network of suppliers, including Bosch, on the ground; and let's not forget — we're speaking of a potential sales market of over 80 million people," Dudenhöffer told Focus Online.

What's more, Volkswagen would be in good company, with major automakers such as Fiat, Renault, Ford, Hyundai and Toyota having produced more than 1.3 million motor vehicles in Turkey throughout 2018.

As the environment for producing cars within the European Union gets tougher because of stricter emissions regulations, Volkswagen and its competitors will find it increasingly hard to produce vehicles with combustion engines in a profitable way. There's always the threat of having to pay huge fines for not adhering to emissions targets in the EU.

This is why relocating the production of combustion-engine cars to a nation outside the EU is strategically important for the Wolfsburg-based company.

Volkswagen is intending to produce its VW Passat and Skoda's Superb models in Turkey in a plant to be built in Manisa near Izmir, aiming for an output of 300,000 units annually and a workforce of roughly 4,000.

The Passat has been coming from VW's German location in Emden and Zwickau, but these facilities are now being prepared for the production of electric vehicles.

The German car giant has signed a multiyear agreement with Amazon Web Services to build the Volkswagen Industrial Cloud. DW takes a look at what VW's cloud-based digital production platform aims to achieve. (27.03.2019)