The head of VW has announced that the company could not afford US-style damages payments in Germany for its emissions scandal. The company's brand chief meanwhile predicted that it would take 14 years to bounce back. 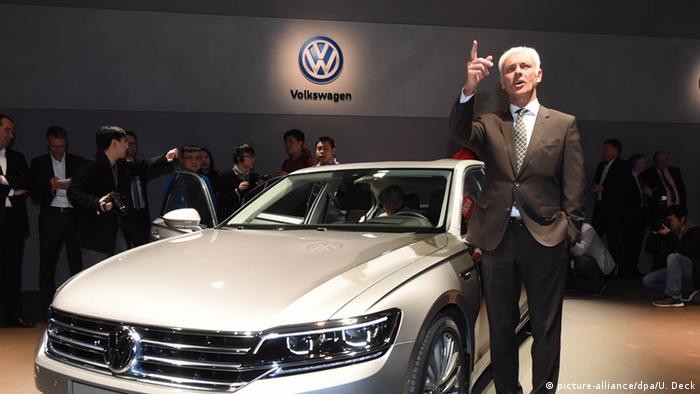 Volkswagen chief executive Matthias Müller said there would be drastic consequences for the car manufacturer if compensation claims on the company in the US over its emissions scandal were also enforced in Germany.

Müller told the Sunday issue of German daily newspaper "Die Welt" there had been renewed calls from German consumer watchdogs for a US-style repayment to VW customers in Germany.

"You don't need to be a mathematician to recognize that a damages payment of any amount would overwhelm Volkswagen," Müller told the paper.

The company has already agreed to pay as much as $14.7 billion (13.2 billion euros) for buybacks, damages and penalties in the US resulting from the emissions scandal as part of an $18 billion package to deal with the crisis.

Repayments in Germany not sustainable

The VW chief stressed that the situation in Germany could not be compared with the US, where authorities expect most customers of VW diesel cars affected by the scandal to upgrade their vehicles to meet emissions standards. Owners of these cars in the US are to receive cash payments to redress the harm caused by the company's deceptive advertising.

"Payments to customers in the US are meant to give owners an incentive to retrofit their cars," Müller said. "But I don't need to comment on the financial impact for our company if we were to do that in Germany," the VW chief added.

Despite the growing impact of the Volkswagen emissions scandal, the German carmaker appeared to remain defiant. Volkswagen's brand chief Herbert Diess said he would not be resigning after the emissions scandal led to an investigation being launched against him. The probe is reportedly looking into the time it took for VW to inform investors it had cheated on emissions tests.

Diess has suggested it would take the car company up to 14 years to complete a strategic turnaround since the scandal broke last year.