A video clip of a Russian riot policeman punching a female protester has gone viral, provoking outrage on social networks. Russia's Interior Ministry has promised that the "guilty will have to face responsibility." 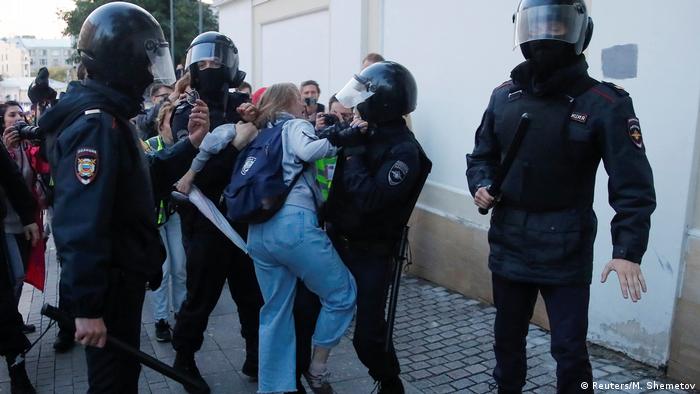 A video clip of a Russian policeman punching a female protester has provoked outrage in the media and on social networks.

In an interview with the Mediazona website, the woman, Daria Sosnovskaya, said she was dragged away by police for protesting the detention of a man with a disability. In the clip, seen here in a YouTube account belonging to VOA News, an officer is seen punching Sosnovskaya in the stomach as officers dragged her to a police vehicle.

"Police officers started running toward me," the 26-year-old told the website. "It was extremely unpleasant. I immediately had cramps everywhere, I couldn't breathe."

Sosnovskaya was then taken to a police station where she did not have access to a lawyer for several hours before being given a warning, she told Mediazona.

In response to the video footage, Russia's Interior Ministry opened an investigation into the incident on Monday, promising that "those who are guilty will have to face responsibility."

Popular singer Egor Krid shared the clip with his 10.7 million followers on Instagram, as did Sergey Lazarev, another well-known singer with more than 4 million fans.

"What kind of a scumbag do you need to be to hit a member of the fairer sex. I don't care what she did. This kind of thing just shouldn't happen," wrote Krid alongside the clip. Lazarev described the police officer's behavior a "disgrace."

Sosnovskaya was one of over 200 people arrested in central Moscow on Saturday for taking part in what authorities described as an illegal protest, an offshoot from an organized demonstration that was approved by government forces. A decision to block opposition candidates from running for election to Moscow's city parliament has prompted weeks of protests.

The non-governmental White Counter monitoring group said up to 60,000 people attended the Moscow rally, making it the biggest show of opposition in Russia in almost a decade.

During Vladimir Putin's two decades in power, polls have often shown Russians blame their government rather than their president for their problems. Amidst a new wave of domestic tension, that could be changing. (09.08.2019)

Russia: Demonstrators defiant ahead of opposition rally in Moscow

A recent police crackdown on protesters pushing for fair local council elections in the Russian capital has not deterred demonstrators. Thousands are expected to rally again over the weekend. (03.08.2019)