Violence on the decline in Mexico′s war on drugs | Americas | North and South American news impacting on Europe | DW | 07.09.2014

Violence on the decline in Mexico's war on drugs

A new policy in the war on drugs appears to be having the desired effect in Mexico. The murder rate is dropping, but despite a return to pre-2010 levels it's still too early to declare victory over the drug cartels. 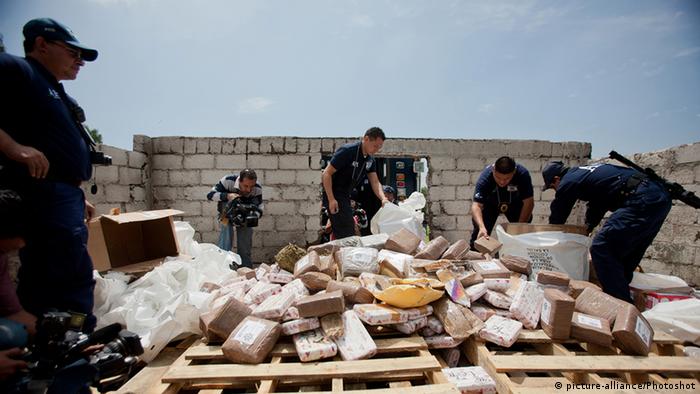 "Narcomensajes": the messages that Mexican drug cartels leave for their adversaries. These drug messages don't come through the mail, but are transmitted by contract killers who leave behind bullet-riddled bodies in public places, severed heads on dance floors and victims hanging from pedestrian bridges.

Atrocities like these, and their dissemination in the media and online, are not just the preserve of Islamist terrorist groups. In the Latin American drug war, these cruel messages have long been an important tool for the drug cartels, which use them to intimidate and deter actual and potential adversaries.

For several years now, the central scene of the drug war in the Americas has been Mexico. The country has experienced a rapid increase in violence since 2007, when the murder rate tripled within four years. Between 2007 and 2012, Mexico's national statistics office counted 121,613 murders. This period coincided almost exactly with President Felipe Calderon's term of office. Calderon declared open war on the cartels and employed massive military force against the gangs. 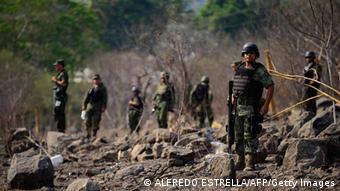 Military strikes against drug cartels are the exception today

The government claims to have killed or captured more than 20 leading figures in the drug mafia. But the price for that success has been high, according to an article for the Cato Institute, an Washington-based think tank. In the piece, Mexico's foreign minister from 2000 to 2003 estimates that 55,000 murders can be directly linked to the war on drugs.

"President Calderon made the war on drugs the central theme of his political policies. Strikes against the drug cartels or allegedly corrupt politicians were played up for the media," explained Günther Maihold, who currently teaches at the Humboldt Institute in Mexico City. The drug cartels saw this struggle for media attention and decided to use it for their own purposes.

The result of this media battle: during Calderon's tenure, 3,793 bodies were found carrying drug messages, according to Mexico's office of national security - an average of 12 executions per week. 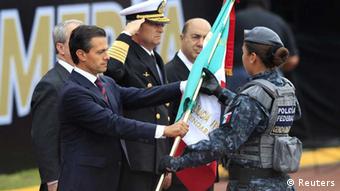 President Pena Nieto relies on police rather than the Military, unlike his predecessor

Under Enrique Peña Nieto, Calderon's successor who has been in office since December 2012, Mexico's government has adopted a new strategy. "The new president has put on emphasis on policing, rather than military and propaganda," said Maihold.

Since then, a number of leading capos have been arrested, among them Joaquin "El Chapo" Guzman, who headed the powerful Sinaloa cartel. Just last week, on August 31, police arrested one of the key men behind the exceptionally cruel Los Zetas cartel. One day later, the military stormed one of the gang's training camps.

Perhaps the most important success of the new strategy - at least for Mexican citizens - has been the significant decline in violence. Over the last few years the murder rate has steadily declined, dropping below 2010 levels last year.

The frequency of the cruel narcomensajes has drastically decreased as well, falling from an average of 52 murders a month to just eight.

"Implicitly, the government seems to be more tolerant towards the cartels, as long as they aren't so bloody and ruthless," Ted Galen Carpenter, senior fellow for defense and foreign policy studies at the Cato Institute, told DW. "Obviously, this is a deal no-one would ever admit." However, the declining murder rate should not be seen as a sign that the cartels are becoming weaker. 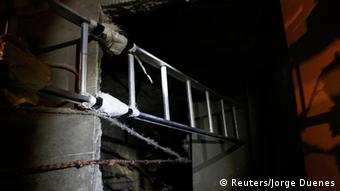 Gangs sometimes use tunnels to smuggle drugs to the US

To avoid the concerted effort by the Calderon administration, drug gangs have increasingly relocated their activities into neighboring Central American countries. In addition, explained Maihold , the cartel structures are very flexible.

"They aren't strictly hierarchical, but consist of relatively autonomous sub-organizations which are able to find new partners relatively quickly, if one falls away," he said. The gangs are also increasingly branching out into other lucrative crimes such as kidnapping, extortion and human trafficking.

The best way to combat the cartels, believes Carpenter, is to deprive them of the basis of their exorbitant profit margins. This task, he said, is primarily one for US politicians. "Prohibition [of drugs] has not led to a solution, prohibition empowers illegal powers," he said. "We need to start a serious debate on how to deal with the massive demand for hard drugs [in the US]." The progressive legalization of marijuana in some states could be just the beginning.

The most important step that President Pena Nieto has taken in this direction might be his investment in infrastructure. "When young people have opportunities to earn money, it decreases their incentive to join a drug gang," said Carpenter. It's a tactic that effectively deprives the cartels of their next generation of gang members.

Mexican officials say they have captured the leader of an organized drug ring known as the Gulf cartel. The arrest is the latest coup for the government, which has vowed a crackdown on the drug gangs. (18.08.2013)

Cato Institute: Time for an Alternative to Mexico’s Drug War