Global murder rates have gone down, but remain high in the Americas and Africa, according to a new United Nations study. Half of the world's murders occur in countries with just 11 percent of the population. 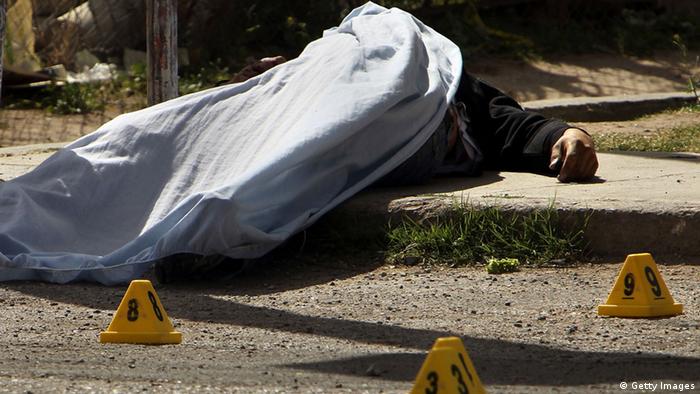 Central America and southern Africa have a murder rate more than four times the global average of 6.2 victims per 100,000 people, the #link:http://www.unodc.org/gsh/:UN Office on Drugs and Crime (UNODC) said in a report Thursday#.

The Vienna-based agency's report chronicles homicides during 2012, when some 437,000 people were murdered globally. That is a decrease from the 468,000 killed in 2010, the first year the study was conducted, but there have nonetheless been regional increases in homicide rates.

UN policy analyst Jean-Luc Lemahieu said the latest numbers show that Canada and the US are below the world average for murder rates, but certain countries in Central and South America are far higher.

"The Americas remain a very violent part of the world," Lemahieu said, noting the high homicide rates in Honduras, Belize, El Salvador, Colombia, Venezuela and Mexico. He added that the drug cartels contributed to the increased violence in Mexico, which has seen its murder rate roughly double since 2011.

"With other parts of Central America, you have to look at the gang issue," Lemahieu said. "The gangs are often created for people who are marginalized who are looking for an identity. They need competition against other gangs, against society. They want to be seen, to be violent, to establish territory."

In North and Latin America, 30 percent of the murders were gang-related, compared to less than 1 percent in Asia, Europe and Oceania - regions that had a higher proportion of homicides connected to domestic violence.

Most women close to perpetrator

Half of all the murder victims were under 30, 80 percent were men, as were 95 percent of the perpetrators, the UNODC said. When women were the victims, they were most often killed by somebody close to them, according to the report.

"There is an urgent need to understand how violent crime is plaguing countries around the world, particularly affecting young men but also taking a heavy toll on women," said Lemahieu. "Home can be the most dangerous place for a woman."

The UNODC noted a sharp rise in the number of murders in North Africa, "which is a new and alarming trend largely associated with increased social and political instability, and should be more closely monitored."

A gun was used in four out of 10 murders, the UNODC said, adding that only 43 percent of the homicides ended in a conviction.