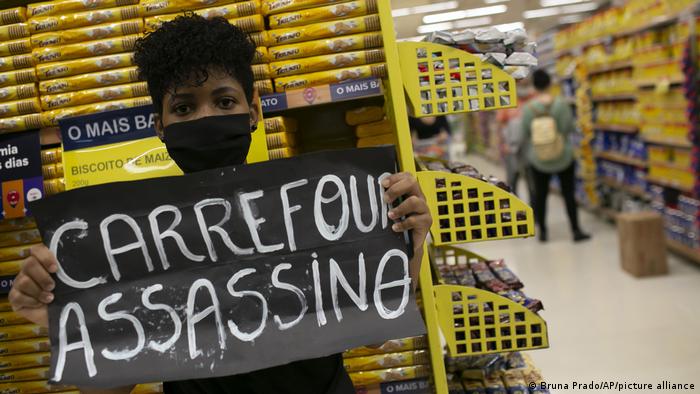 Protests occurred across Brazil on Friday after a Black man died after he was beaten by white security guards at a Carrefour grocery store in Porto Alegre.

A short video captured by a store employee showed one guard restraining the man, Joao Alberto Silveira Freitas, just outside of the supermarket. Another security guard repeatedly struck Freitas' face. Later clips recorded after the initial strikes showed a guard kneeling on Freitas' back. 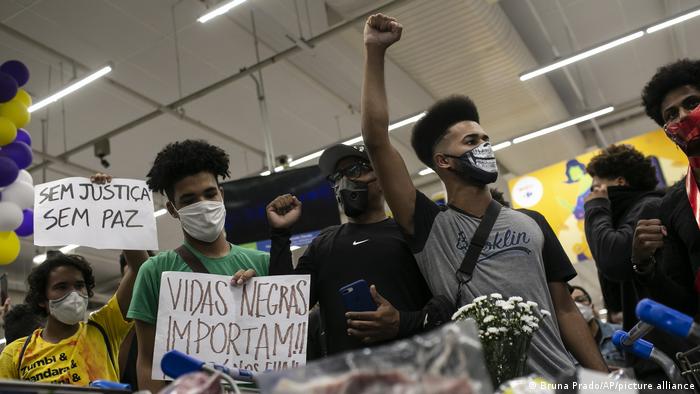 Protests were held outside several Carrefour stores across Brazil with demonstrators chanting "Black lives matter" and "Carrefour killer." Fires were lit in some stores. Some protesters compared Freitas' death to that of George Floyd, who died while in police custody earlier this year and sparked protests around the world.

The men who beat Freitas, one of whom the military said was an off-duty military policeman, have been detained and are being investigated for homicide.

The beating took place overnight Thursday, on the eve of Black Consciousness Day in Brazil. The day is meant to recognize Black culture in the South American nation.

Eduardo Leite, governor of the state where Porto Alegre is, tweeted his frustration on the day turned sour.

"Unfortunately, on this day in which we should be celebrating those public policies, we come across scenes that leave us all indignant due to the excessive violence that caused the death of a Black citizen at the supermarket," said Leite.

Black and mixed-race people account for about 57% of Brazil's population but are 74% of victims of lethal violence, and 79% of those killed by police, according to the Brazilian Forum on Public Safety, a nongovernmental organization.

Brazilian Vice President Hamilton Mourao told reporters the incident at the Carrefour was unfortunate but denied that it reflected racism.

"Racism doesn't exist in Brazil. That is something they want to import here," said Mourao. "I lived in the United States. There is racism there."

Brazilian President Jair Bolsonaro has also said there is no racism in Brazil.

Carrefour Brasil, the local unit of Carrefour, released a statement that said it deeply regretted what it called a brutal death. The company also said it has terminated its contract with the security firm whose employees were under investigation for the death.

The French multinational corporation has a checkered past in Brazil. The security that the company had employed was previously accused of violence, predominately against Blacks.

In August, a Carrefour Brasil worker had a heart attack and died on the floor of a store in the northeastern city of Recife. His body stayed on the floor and was covered in umbrellas and cardboard boxes. The store remained open for business until paramedics arrived.

A security guard at a store in the state of Sao Paulo killed a street dog with a metal bar in 2018. The incident sparked an outcry on social media in the country.