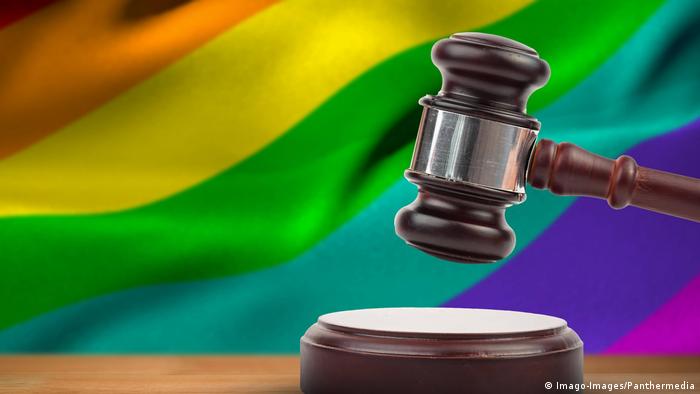 With a two-thirds majority in parliament, this week Hungary's governing coalition passed a law that prohibits transgender and intersex people from changing the gender was registered in their birth certificates. According to the law, identity is now determined forever "by primary sex characteristics and chromosomes."

At the end of March — in the midst of the coronavirus pandemic — Hungary's nationalist prime minister, Viktor Orban, had announced that his government would abolish the possibility of changing one's gender on identity documents. Protests by opposition politicians who pointed out the serious consequences for those concerned were ignored. In April, Imre Vejkey, a parliamentarian from the Christian Democratic People's Party, a partner in Orban's coalition, said "the opinion of those affected plays no role."

Rights groups have sharply criticized the law. David Vig, the director of the Hungarian branch of Amnesty International, said the decision "pushes Hungary back towards the Dark Ages."

Read more: Is the Eurovision Song Contest too 'gay' for Hungary?

Tamas Dombos, from the LGBTQ+ organization the Hatter Society, told DW that the law was "extremely problematic." Dombos said it means, among other things, that trans people would now have to reveal their transgender identity every time they conduct official business.

The law has also triggered massive criticism internationally. The Council of Europe Human Rights Commissioner Dunja Mijatovic described it as a "blow to the human dignity of trans people." She said it contradicted the case law of the European Court of Human Rights (ECHR).

The United Nations, the European Union and LGBTQ+ organizations across the world have also condemned the law. On social media, opponents of the law launched a protest campaign under the hashtag #drop33 — a symbolic dropping into the wastebasket of this amendment to Article 33 in Hungarian law.

As the law is consistent neither with the Hungarian constitution nor with European human rights standards, it will be combated "with every means," Dombos said. The Hatter Society has called on Hungary's president not to sign the bill into law and to submit it to the Constitutional Court for review. But the president and the judges at the court are all loyal to Orban and, as a rule, do not oppose the government in its legislation.

Another option would be to lodge a complaint with the ECHR in Strasbourg, Dombos said. But he is not optimistic: "A final decision will take years, whether in Hungary or Strasbourg. Until then, transsexuals will not have the chance to have their gender legally recognized, which will expose them to discrimination and possibly even violence."

In the past few years, officials in Hungary have shown increasing antipathy toward LGBTQ+ people. The parliamentary speaker, Laszlo Kover, compared the adoption of children by homosexual couples with pedophilia. Not long afterward, Istvan Boldog, the deputy chairman of the parliamentary party of Orban's Fidesz, called for the abolition of Budapest Pride. And the pro-government journalist Zsolt Bayer even proudly announced: "Yes, we are homophobic."

Dombos said the government made such statements to appeal to voters after seeing how well official homophobia has performed as an elections strategy for the government in Poland. In Hungary, as in Poland, LGBTQ+ people do not fit in with the conservative Christian worldview of the government. Orban has emphasized several times that in his eyes, Hungary is an illiberal state, i.e., a state in which people are not meant to be able to live the way they want to live.

Shortly after taking office 10 years ago, Orban had the constitution changed to fit his views. Now, it reads: "Hungary protects the institution of marriage as a union of man and woman … and the family as the basis for the survival of the nation."

Orban has found a battle cry for everything that does not keep with his view of the world: gender. Hungary's government has denied proposals for research in the field and has forbidden gender studies as a university course.

Hungary'ss government has refused to ratify the Council of Europe's 2011 Istanbul Convention to combat violence against women and domestic violence, charging in a statement that it promotes "destructive gender ideologies": "We have the right to defend our country, our culture, our laws, traditions and national values, which should not be threatened by ... gender theory that goes against the beliefs of the majority of the population."