More and more people are dissatisfied with their appearance on video calls and want cosmetic surgery. But surgeons say the reasons for seeking treatment during the pandemic go deeper than that. 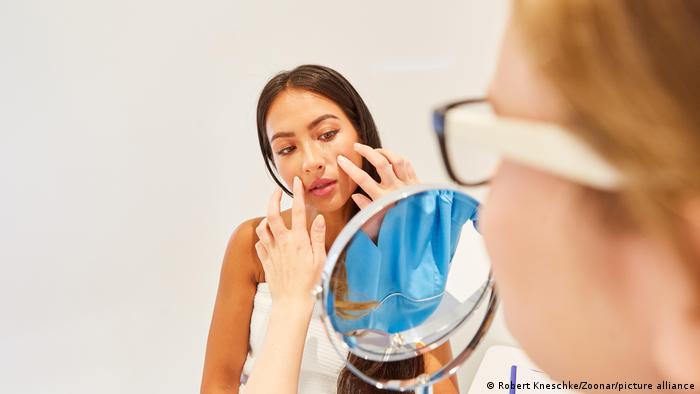 In Germany, demand for facial cosmetic surgery went up in 2020, despite an overall decline in cosmetic procedures

Sagging cheeks. Shadows under the eyes. Those vertical lines you get above your nose when you're squinting and, as you now know, when you aren't.

The pandemic has made us better acquainted with many things: Our homes, our roommates, our immune systems — and our faces. For white-collar workers, the use of videoconferencing software like Zoom and Microsoft Teams skyrocketed during the pandemic as people transitioned to working from home in an attempt to slow the spread of COVID-19.

Now some are pointing to video calls as the reason for a reported uptick in cosmetic surgery procedures in what cosmetic surgeons around the globe have called the "Zoom Boom."

"It's the face that everyone holds in front of the camera," Dr Daniel Sattler, a specialist for plastic and cosmetic surgery based in Bonn, Germany, tells DW. "It is certainly also the case that using Zoom conferences for work might give people the feeling that they're looking in the mirror for eight hours a day."

In an academic survey of cosmetic dermatologists in the US, 86% of respondents said patients had mentioned videoconferencing  as a reason to seek a cosmetic consultation, and nearly as many said their patients were somewhat to significantly less happy with their appearance since using videoconferencing during the pandemic.

"I'm just seeing my own image over and over," explains Dr Steffen Handstein in a telephone call about the phenomenon. Handstein, a cosmetic surgeon based in eastern Germany, is president of the Association of German Aesthetic Plastic Surgeons (VDÄPC).

"That sort of changes people's perception. In this respect, one can certainly assume that people's self-perception has taken on a different quality lately."

The global aesthetic medicine market was valued at $86.2 billion (€72.9 billion) in 2020, according to figures from Grand View Research, and is expected to grow at a compounded annual rate of nearly 10% through 2028.

Despite restrictions posed by lockdowns, nearly 60% of dermatologists in the US survey reported a rise in cosmetic consultations relative to before the pandemic. In Germany, while the overall demand for procedures fell slightly in 2020 as lockdowns temporarily closed many practices, demand for facial procedures went up 1.7%, according to a survey of cosmetic surgeons conducted by the VDÄPC. So-called minimally invasive procedures, like Botox and facial fillers, went up 3.4%.

These minimally invasive procedures, which, unlike traditional surgery, require smaller or no incisions, had already been a key driver of growth in the field in the years leading up to the pandemic.

A Zoom-driven rally is a natural progression from an uptick in business that came with the rise of social media. Both Handstein and Sattler point to an overall growth in the use of cameras as the real driver of their industry today. Photo editing software and filters now allow people to present an ideal image of themselves to the online world.

"There is a desire not to have to use these filters anymore, or people want to look in real life like they do with the filters," says Sattler. "And that is what they want to achieve with surgery. Of course, to some degree, that is very unrealistic. I also see an important role there [for cosmetic surgeons]. I'd say that recently I've had a lot of patients whom I have to hold back a lot, so that it doesn't go too far."

For those seeking a more Zoom-ready look, cosmetic surgeons can provide a range of services, including but not limited to lip sculpting, reshaping of the chin or nose, cheek and neck lifts, and treatments to reduce or eliminate a double chin.

The procedures clients have been seeking during the pandemic can be traced back to more than just video calls. A lot of these trends began on social media. Masks and working from home then came along, making it easier to be discreet about recovery. Less money spent on restaurants, vacation, and other forms of entertainment also meant people had more cash on hand.

"This need remained that people said, despite this pandemic and all these restrictions, I want to treat myself," says Sattler. "I want to fulfill a wish that I might have had for some time. And I think that's why the numbers have gone up."

"I also think that our field — it is definitely pronounced in my area — has a strong psychological component," the surgeon added. "It's just been clear lately that there are rain clouds hanging over people's heads. And if you can't hop on a plane every now and then and see blue skies and sun again, then you might try to cope or to compensate. "

Face to face: The price of perfection

Considering the social factors that were driving the field's pre-pandemic growth, Dr. Handstein believes that the trend is likely to continue as life edges back towards normalcy in some parts of the world. But the hype around noninvasive procedures like Botox and fillers has been a double-edged sword for the field.

On the one hand, they are cheaper, easier to perform and require less recovery time relative to more invasive cosmetic surgery. And because in many cases the results fade over time, clients are both more likely to try it and more likely to come back for more if they like what they see.

But between the media buzz around these procedures and the quick business they generate, there's a risk that surgeons could rely on them too much.

"Ultimately, it's not a matter giving any old procedure to a patient with a specific issue just because they like the idea," said Handstein. "On the contrary, it's about finding an individual, customized solution for each patient based on in-depth explanations, and ideally pulling from a broad range of treatments."

As with many cosmetic trends, certain looks could eventually fall out of favor. And there are other factors for the industry that are even harder to forecast.

"What we certainly can't predict at the moment are the societal effects of the whole situation," he adds. "Are things developing in the direction of inflation? Is it a direction where people have less economic security than they had before? And where they have to think again about what their priorities are now?"

With every new Rammstein release comes a clever advertising campaign. Their new single, "Zick Zack" plays with the morbid appeal of a "botched" cosmetic surgery.