A zoo in California has administered a new type of inoculation aimed at preventing coronavirus in animal species. Meanwhile, the 7-day incidence in Germany went up for the first time in weeks. Follow DW for more. 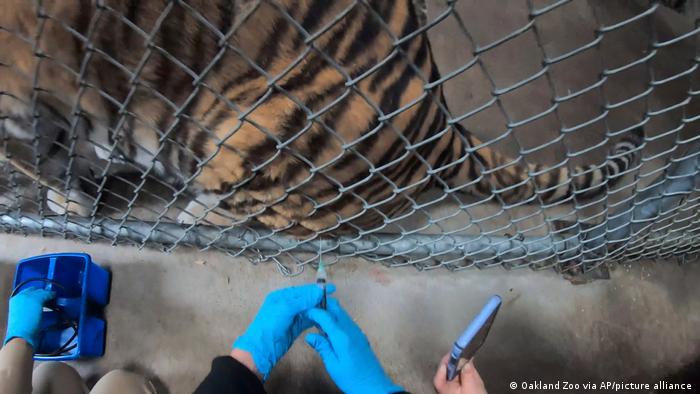 Tigers, bears, and ferrets are the first in line for vaccinations in Oakland

A United States zoo has begun inoculating big cats, bears, and ferrets against the virus using an experimental vaccine, as efforts are ramped up to protect animal species from the coronavirus.

The Oakland Zoo in the San Francisco Bay Area administered the shot to its tigers Ginger and Molly, as well as black and grizzly bears, mountain lions and ferrets. Primates and pigs are next on the list.

The shots have been donated by the veterinary pharmaceutical company Zoetis, which aims to deliver 11,000 doses for animals in nearly 70 zoos.

French Health Minister Olivier Veran urged as many French people as possible to get a COVID-19 vaccine, warning that France could be heading for a fourth wave of the epidemic by the end of July due to the Delta variant.

"For five days, (the infection rate) hasn't come down, it's rising again. Because of the Delta variant, which is very contagious. The British example shows that a fourth wave is possible from the end of July," Veran said on Twitter.

"We must move even faster (on vaccination). Our country is in a race against time," he added.

Russia's daily COVID-19 cases have soared to the nighest number since January. The country recorded more than 25,000 new coronavirus infections over the past 24 hours on Sunday.

Particularly affected are the capital Moscow and St Petersburg, which on Friday hosted its seventh match during the ongoing European Football Championship.

No nationwide lockdown is planned, the Kremlin has announced. In Moscow, people are only allowed into restaurants with a negative PCR test or with proof of vaccination.

Germany has registered 559 new cases of the virus, taking the country’s total tally to 3,730,912, according to data from the Robert Koch Institute (RKI) for infectious diseases. With seven deaths reported, the total toll has risen to 91,030.

For the first time in weeks, the 7-day incidence of coronavirus infections increased compared to the previous day. It was 5.0 infections per 100,000 inhabitants within seven days, up from Saturday's figure of 4.9.

Hamburg's iconic fish market opened on Sunday for the first time in more than 15 months following a pandemic-enforced closure.

Meanwhile, representatives from Germany's governing parties have joined calls to penalize people who fail to appear for their vaccination appointments, according to media reports.

"It would be appropriate if there were a fine for those who don't even cancel their appointment," health expert for the SPD Karl Lauterbach told the Bild am Sonntag newspaper.

"These missed appointments mean we are vaccinating more slowly than we could, and that we have to throw away vaccine," said Lauterbach, a medical doctor and researcher. Lauterbach stressed that he works as a vaccinator in Leverkusen and knows the problems caused by missed appointments.

The data that determines whether England will see the lifting of lockdown restrictions on July 19 looks promising, according to Housing Secretary Robert Jenrick.

"The data that we're seeing that the Prime Minister is reviewing at the moment ahead of his decision point on the roadmap looks very positive," Jenrick told Sky News, attributing the success to the country’s vaccination program.

"It does seem as if we can now move forward and move to a much more permissive regime where we move away from many of those restrictions that have been so difficult for us."

Slovakia has tightened its entry rules amidst fears about new coronavirus variants. Starting July 9, all unvaccinated visitors — regardless of country of origin — will have to quarantine for 14 days, according to the new rules.

People who have been fully vaccinated for at least 14 days are exempt from quarantine. The quarantine can also end after taking a PCR coronavirus test on the fifth day at the earliest.

Transit travelers are also exempt, but they must stick to predefined road routes.

Iran has announced it is reimposing restrictions on major cities, as the spread of the highly contagious Delta variant threatens to overwhelm the country

After over a year battling the worst virus outbreak in the Middle East, Iran has closed non-essential businesses in 275 cities, including Tehran.

The shutdown of all public parks, restaurants, dessert shops, beauty salons, malls and bookstores is applicable to the country's "red" and "orange" zones, or municipalities ranked as having an elevated risk of COVID-19.

The government said it was also imposing a travel ban between cities with high numbers of cases.

China administered 12.9 million doses of the coronavirus vaccine on July 3, according to data from the National Health Commission. This takes the country’s total number of shots administered to 1.296 billion doses.

Voters in Tokyo are set to elect the Japanese capital’s city assembly on Sunday amidst worries about the health risks associated with the Olympics, which will open in three weeks.

While public surveys show that most residents want the Games canceled or postponed, teams have started arriving in the country for the Olympics.

According to reports, a member of the Serbian Olympic rowing team has become the latest participant to test positive for the virus while attempting to enter the country.

Authorities in Tajikistan have made it mandatory for all people over the age of 18 to get COVID-19 vaccinations. The country has registered 13,569 coronavirus cases and 92 deaths since the beginning of the pandemic.

The vaccines being administered include the AstraZeneca shot, manufactured in India, and the Chinese Coronavac.