Italy's World Heritage Site city has been hit by a third exceptional flood. The water reached 1.5 meters above sea level in the iconic city. 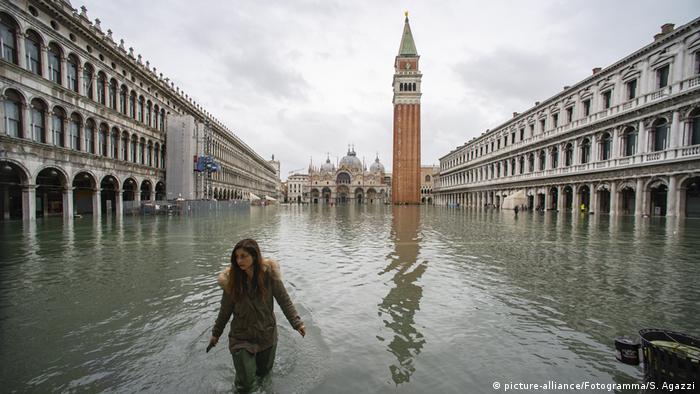 Record flood water levels in Venice hit again on Sunday making this the worst week of flooding in the city in over 50 years.

The new peak left 70% of the UNESCO World Heritage city submerged on Sunday.

Since records began in 1872, that level has never been reached even twice in one year. There is no other week on record where waters have reached the 1.5-meter mark three times in one week.

St. Mark's Square — the lowest point in the city and home of the iconic St. Mark's Basilica—was submerged again and closed to tourists.

Hundreds of volunteers mobilized to help Venice's inhabitants and to protect iconic buildings in the city, which is world-famous for its canals, historic architecture and art.

Mayor Luigi Brugnaro, who has also been appointed special commissioner to deal with the emergency, pleaded with citizens not to give up hope, saying, "Venetians only get on their knees to pray."

Earlier in the week the city declared a state of emergency and ministers pledged €20 million ($22 million) to address the immediate damage.

Other parts of Italy also experienced severe weather during the weekend, with the river Arno in Pisa threatening to burst it banks.

Why has Venice flooded?

Experts say that Venice is both sinking into the mud it was built on and is at threat from rising sea levels due to climate change.

The flooding has renewed calls for the Mose flood barrier project for the city.