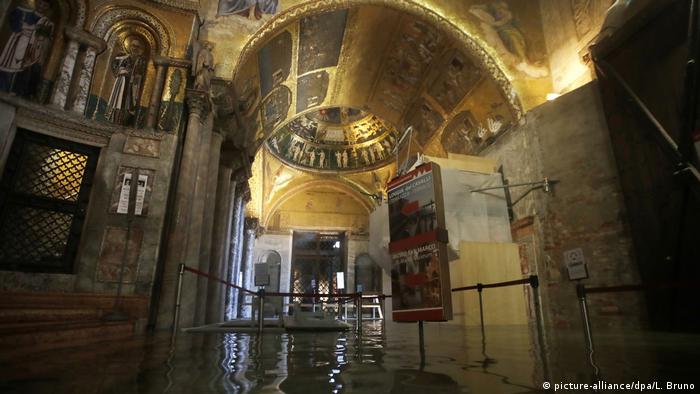 DW: Mr. Taubert, what went through your mind when you saw images of the recent flooding in Venice?

Sven Taubert: First, one thinks of flooding in Venice as a normal occurrence. But we have to differentiate between normal flooding and extreme flooding.

Flooding is common in Venice. But when waters rise higher, that gives people like me — who are engaged in conserving and protecting art and historic buildings — an uneasy feeling, because it means water will force its way further into buildings, affecting them and the artworks they house. It is also a sign that climate problems are only getting worse.

One hopes such occurrences do not happen more frequently and in shorter intervals. There is little chance to prevent damage to artworks by flooding, and the immediate removal of transportable works is often very difficult in most cases. Immobile works like frescoes, which are part of the architecture, are almost impossible to protect.

The last flood of this magnitude was in 1966, 53 years ago. But flooding is common in Venice, does that mean they are better equipped to deal with it?

Buildings there generally have a higher resistance to moisture. The wooden pilings they rest on are less likely to rot as long as they remain submerged and are not exposed to air. That is something that was taken into consideration when the city was built.

But that also means the level of moisture in the buildings' walls are increased due to their capillary structure. Eventually, that moisture settles at a certain level. However, when water pressure from below increases and floods occur more frequently, we have to assume that more damage will be the result. Moisture will then work its way into areas of the building where it had not been before.

What then happens to the buildings?

Permanent moisture increases set readily soluble salts loose, these in turn present a further threat to the buildings as they attack their substance. Those salts are pushed into areas of the building where they simply don't belong. At that point, they crystalize and bloom on the walls. The crystallization then creates pressure that can destroy a building's masonry structure.

That is the case with natural stone — such as sandstone or limestone — brick or terra-cotta, as well as mortar and plaster. Venice possesses a unique amount of especially valuable wall paintings and frescoes dating back to the Renaissance. We are very saddened by the loss of such works.

Can the frescoes be saved?

If the attrition has not progressed so far that the works are literally falling off the walls, or have already fallen from them, one can still act. Conservators can, for instance, adhere reinforcement layers to the surface of a work by attaching silk paper to the surface with soluble glues — thus making the process reversible. This special Japanese paper is cut into small strips and applied to the surface to keep a fresco attached to the wall.

Once the surface has been secured, one can deal with the crumbling subsurface, injecting binders to secure the plaster. These are all highly specialized processes and methods that must be weighed case by case. A major problem is that one also encloses the salt crystals that are present. Again, this is something that must also be considered on a case by case basis.

Can entire frescoes be saved by removing them from their original site and taking them to a place where they are safe from water? One could replace them with copies that would present less of a loss if flooding occurred again.

Translocation, that is the removal and reinstallation of wall paintings, is a hotly debated topic. It is also a problematic process, because one must always decide on whether to remove only the painted surface, the painted surface as well as the plaster below it, or the entire wall.

Translocation always involves stress and loss. One is constantly faced with the problem of determining where to cut a particular section in order to remove it. It is impossible to remove an entire 30-square-meter (323-square-foot) image from a wall in one piece. One could say it's a trade off between risks presented to the patient in relation to his chances of survival. The more valuable an artwork is, the more critically experts have to look at and discuss the situation. But the process does present an option should extreme flooding become more frequent in Venice.

Sven Taubert is a professional art conservator and spokesman for the wall painting and architectural surfaces expert group of the German Association of Restorers. He has dedicated himself to the restoration of historical buildings for the past 15 years. For the past nine years, he has been deeply involved in repairing flood damage sustained at the Saint Marienthal Cistercian Abbey on the Neisse River near Dresden.