Italy's government declared a state of emergency on Thursday as water levels in Venice remain high. Damage costs are estimated at hundreds of millions of euros. 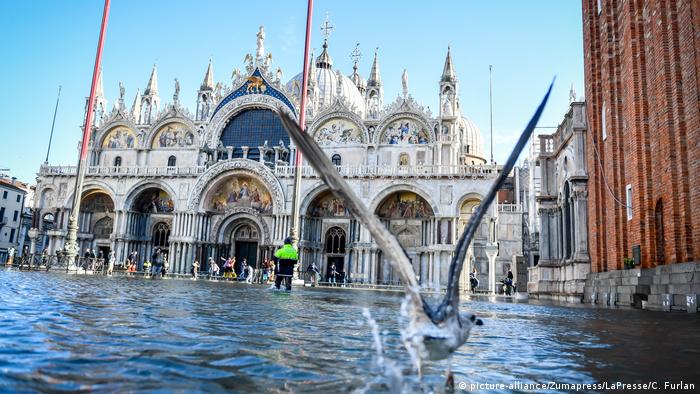 Conte also tweeted that the Italian Cabinet approved €20 million ($22 million) to help the city recover from the floods.

Water levels have remained high since reaching their peak of 187 centimeters (74 inches) on Tuesday night.

DW's Giulia Saudelli said on Friday that sirens were sounding Saint Mark's square ahead of high tide, amid concerns that the water level would reach 140 centimeters (51 inches), even higher than the previous day.

Venetian mayor Luigi Brugnaro said on Thursday that the city was "on its knees" and unequivocally blamed climate change for the high water levels.

"There's widespread devastation," he said. "In all likelihood the damage runs into the hundreds of millions of euros."

In Venice, the crypt beneath St. Mark's Basilica was inundated for only the second time in its history. The city's archbishop, Francesco Moraglia, said the basilica had suffered "irreparable damage," with salty water posing risks to its mosaics, columns and pavements.

Where will the money be spent?

PM Conte tweeted that the money approved by the Italian government would be used for "the city and its population."

Italian newspaper Repubblica earlier reported that Conte planned to pledge financial aid to all Venetians in light of the high cost of damage done to property and potential losses of income from tourism.

Venice for years has been struggling with a huge number of tourists, the constant deterioration of its fragile lagoon environment and a dwindling population.

The latest floods have reignited a yearslong debate about the controversial semi-submersible barrier system, Moses, which Conte reaffirmed in Repubblica that it was on track to be ready by 2021.

The multibillion-euro flood defenses project, which has been under construction since 2003, has been delayed a number of times due to corruption scandals, cost overruns and environmentalists' opposition over its effects on the city's lagoon ecosystem.

The plan involves 78 gates that can be raised to protect Venice's lagoon during high tides — but a recent attempt to test part of it caused worrying vibrations and engineers discovered it had rusted.