With opposition parties banned and an ongoing economic crisis, a scant number of Venezuelans cast their votes. At the ballot box, President Nicolas Maduro accused the US of seeking to "divide" his country. 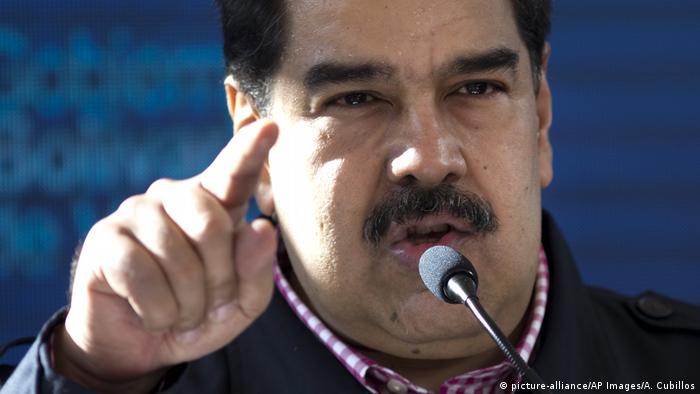 In a vote to select 2,459 members for 335 of Venezuela's city councils, the government of Nicolas Maduro won 90 percent of the posts on Sunday — although only around 27 percent of Venezuelans participated in the election.

The local elections, held amid widespread apathy and an opposition boycott, came a month before Maduro begins his second six-year term. He won re-election in May, but his legitimacy has been put into question by political opponents, the European Union, the United States and most of Latin America.

Sunday's vote was the most recent in a series of elections convened by the governing Constituent Assembly. The controversial legislative body, which stripped Venezuela's opposition-led legislature of its authority, was created in 2017 in the midst of protests and political unrest that left 125 people dead.

As Maduro appeared on state television on Sunday to cast his vote in Caracas, he urged Venezuelans to vote to ensure they could "continue living in democracy." The embattled president pointed to the nine elections that have been held during his presidency as a testament of its democratic character.

"Despite the conspiracies that come from the White House to divide our country, we have a strong democracy," Maduro said. The Venezuelan president has maintained that he is a victim of a US-led plot to remove him from office, and has blamed the current economic crisis on sanctions imposed by Washington.

After four opposition parties refused to participate in the presidential election in May, in an attempt to protest the lack of fairness within the process, the Venezuelan National Electoral Council banned them from this Sunday's election.

In Caracas and other cities across the country, numerous polling stations were reportedly near empty, with few people in line to cast their vote.

Venezuela is currently living through its fifth year of a recession that has shrunk the size of the economy by half and forced 3 million people to leave the country to escape hyperinflation and rampant crime.

The Venezuelan president, who views Russia as a strategic ally, is ending his diplomatic efforts this year "with a flourish." The trip comes after Turkey pledged to help Venezuela with its economic crisis. (04.12.2018)

Reports of an apparent attack on President Nicolas Maduro leave more questions than answers, except for one: The only one benefiting from all this is Maduro himself, writes Uta Thofern. (05.08.2018)

Venezuelan pianist Gabriela Montero: 'How can we not take a stand?'

With an extremely rare gift for improvisation, the Venezuelan pianist has wowed audiences for decades. The de facto implosion of her homeland has made her an advocate for her people. (04.12.2018)

Venezuela has suffered from a severe political and economic crisis since a collapse in oil prices several years ago. It has sought to bolster its ties with Turkey as it faces down a range of US sanctions. (04.12.2018)