Venezuela has called its creditors to a debt-restructuring meeting in a week’s time but made a show of servicing loans owed by its state oil company. This follows further downgradings by two credit-rating agencies. 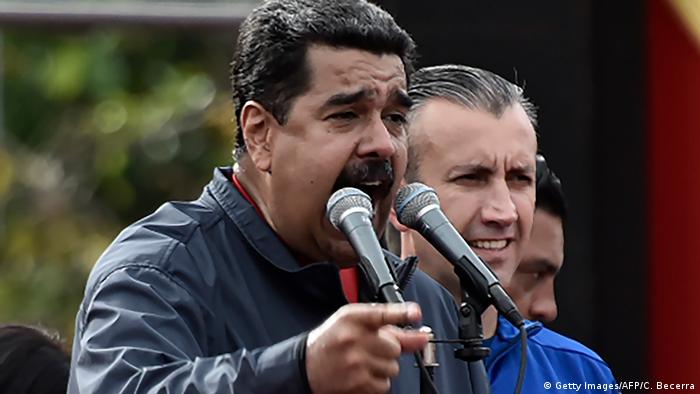 El Aissami behind President Maduro at a 2017 May Day rally

The new note unveiled by President Nicolas Maduro is meant to curb out-of-control inflation that has left the country reeling. Just one year ago, a 100 bolivar bill was the largest amount of cash on the market. (02.11.2017)

Russia says it may restructure Venezuela's debt payments as oil continues to flow between the two allies. Embattled Venezuelan leader Nicolas Maduro is due to meet his Russian counterpart amid an economic crisis at home. (04.10.2017)

The European Parliament has awarded its Sakharov Prize for Freedom of Thought to Venezuela's opposition-dominated National Assembly, as well as to political prisoners in the country. (26.10.2017)

The nation led by controversial President Nicolas Madura, which ran up massive debts before global oil prices slumped, is estimated to owe $120 billion despite sitting on massive oil reserves.

The restructuring talks were scheduled for November 13, said Aissami, one of several Venezuelan officials sanctioned by the USA for alleged ties to drug trafficking.

El Aissami said those talks would proceed despite what he called "imperialist sanctions" – a reference to fresh US sanctions imposed in August to restrict trading in new dollar-bonds.

Chunks of Venezuela's debt are held by China and Russia, to be paid off in oil. A default could see investors lay claim to PDVSA assets, including tankers, to offset $45 billion owed by the state oil concern.

Scarcity of cash, coupled with triple-digit inflation, has left many Venezuelans struggling to obtain basic groceries.

An analyst at the London-based HIS Markit, Diego Moya-Ocampos, said Venezuela's options to keep up with its debt payments were "shrinking rapidly.”

Although, since 2014, Venezuela has paid nearly $72 billion in principal and interest payments, it is estimated to hold less that $10 billion in foreign currency reserves.

On Friday, the International Monetary Fund (IMF) sanctioned Venezuela for not providing economic data as required of all its 189 member states.

Voting has begun in Italy in a snap ballot to elect a new parliament. The country may see its first far-right leader since World War II. DW has the latest.