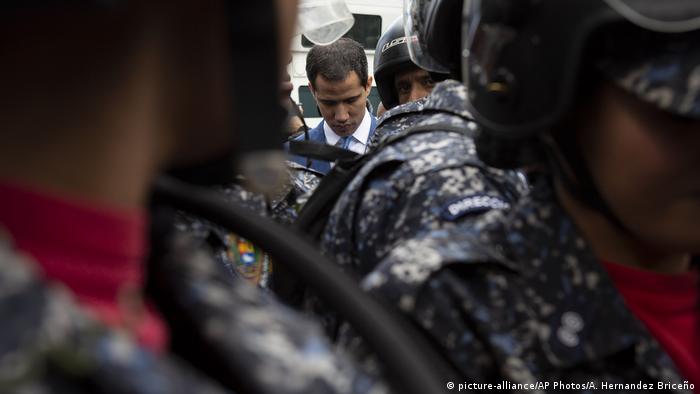 Venezuela's government on Sunday announced that a dissident opposition politician and rival to Juan Guaido had been named the new head of congress, a move opposition leaders have denounced as a "parliamentary coup."

Troops with riot shields blocked Guaido and other opposition lawmakers from entering the chamber as legislator Luis Parra declared himself National Assembly chief.

Hours later, a majority of congress members held an emergency meeting at the headquarters of opposition newspaper El Nacional, where 100 of the 167 congress members voted to reelect Guaido as their leader for the final year of the 2015-2020 term.

State television showed Parra — who was recently expelled by an opposition party over corruption allegations that he denies — participating in what appeared to be an improvised swearing-in ceremony inside the legislative palace. 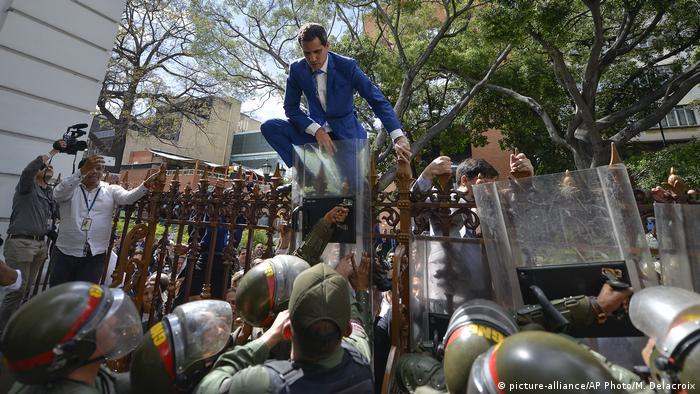 Guaido has led opposition to Socialist President Nicolas Maduro for the past 12 months and had hoped to be confirmed for a second term as parliament speaker on Sunday. But when he arrived for the special session, police prevented him from entering. At one point the 36-year-old attempted to climb over a fence to reach the chamber before he was pushed back by troops.

"This is unprecedented!" Guaido told a member of the security forces with whom he had a heated exchange.

"The regime is kidnapping and persecuting deputies, militarizing the Federal Legislative Palace, preventing access and blocking entry to the free press," Guaido said on Twitter. "This is the reality in Venezuela: the desire for change in the face of a dictatorship that continues to persecute."

In a televised speech, Maduro recognized Parra as Guaido's successor, saying Guaido had been "kicked out ... by the votes of his own opposition."

Opposition lawmakers said Parra's election was invalid, arguing the session was never formally opened, no quorum count was taken and no formal vote called. For more than an hour, troops reviewed the credentials of each lawmaker, in what critics called a strategy to delay the session or prevent the assembly from reaching quorum.

Journalists as well as lawmakers were prevented from accessing the site, giving Socialist Party legislatures a chance to take control of the chamber and install Parra.

The session has been condemned by the European Union, the United States and several Latin American countries.

Read more: Venezuela: Opposition lawmakers to be tried for treason 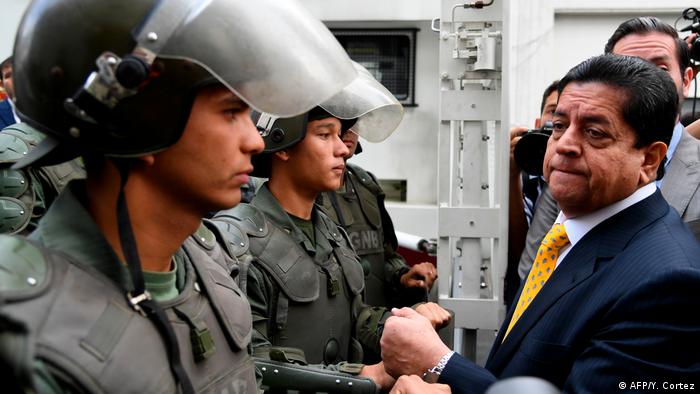 Edgar Zambrano (right), vice president of the National Assembly, was forced to wait to enter the assembly building

In January 2019, Guaido declared Maduro's presidency to be illegitimate based in part on elections in May 2018, which were marked by significant irregularities. The opposition leader has said Maduro violates the country's constitutionally enshrined democratic principles, while Maduro has accused Guaido of staging a coup and of being a US puppet.

Guaido is supported by more than 50 governments who recognize him as Venezuela's rightful leader.

Colombia, Brazil, the US and the EU have said they will continue to back Guaido. US State Department official Michael Kozak wrote on Twitter that Guaido "remains Venezuela's interim president under its constitution."

"This morning's phony National Assembly session lacked a legal quorum. There was no vote," he said.

Venezuela's opposition leader Juan Guaido has made a new push to oust President Nicolas Maduro, claiming he has the backing of parts of the army. As protesters face off with security, the world reacts. (30.04.2019)

The Venezuelan president has proclaimed support for his armed forces just days after the opposition staged a rally to display its military backing. Meanwhile, international pressure is mounting on Maduro to step down. (02.05.2019)

Venezuela is experiencing an unprecedented humanitarian crisis. Hunger is widespread and there is a severe shortage of medicines. The UN estimates that more than four million people have now fled. (28.11.2019)