Two former soldiers and mercenaries from the US have each been handed 20-year prison sentences over a foiled invasion attempt earlier this year. The ex-Green Berets were also charged with terrorism. 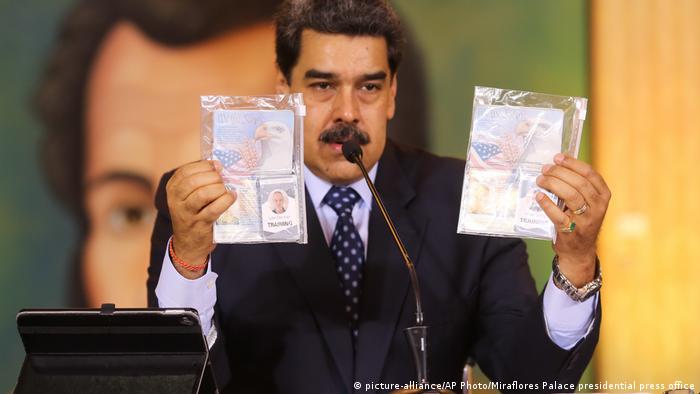 Two former US soldiers were sentenced to 20 years in prison in Venezuela on charges including terrorism after attempting to invade the country in May, prosecutors announced Saturday.

The two men were charged with "conspiracy, association [to commit crimes], illicit trafficking of war weapons and terrorism" over the attempted invasion. Operation Gideon was headed by another soldier, who is currently in the US.

Saab added that the case would continue for dozens more defendants, posting pictures of the invasion investigation on Twitter.

Denman and Berry are two of 91 people captured during the botched sea incursion on May 3. Armed men landed in Macuto, around an hour from the capital of Caracas. Eight of the attackers were allegedly killed. The invasion was launched from neighboring Colombia.

The US government and Maduro's rival Juan Guaido both denied involvement in the attempted coup, describing it as a "mercenary invasion." Maduro has directly accused Guaido, who declared himself acting president in January 2019, of planning the invasion.

Guaido's office has said he was aware of the operation since October but did not finance or plan it.

US President Donald Trump has long been a critic of President Maduro, with the US officially recognizing Guaido as president. US Secretary of State Mike Pompeo previously said the US would use "every tool" to ensure the accused US citizens' return.

Venezuela is in the middle of an economic crisis under Maduro's leadership which has been compounded by the coronavirus pandemic, with thousands fleeing the country.