Venezuela's opposition-led National Assembly has put out its own economic figures after President Nicolas Maduro refused to do so. Lawmakers have warned that inflation could rise up to 1,400 percent by the end of 2017. 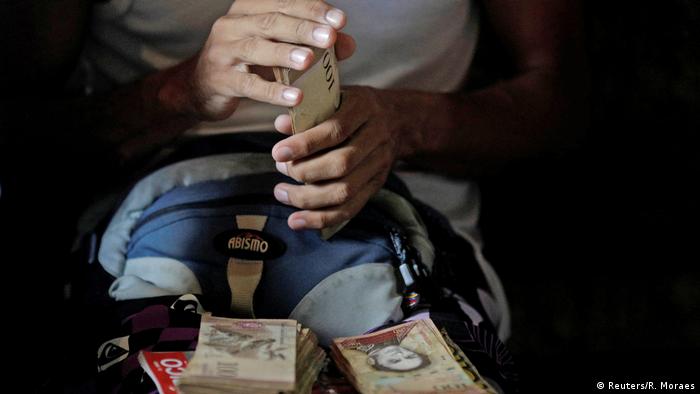 Venezuela's opposition-led National Assembly said on Tuesday that the country had entered a state of hyperinflation. According to Reuters news agency, the country's inflation rate was now at a staggering 826 percent – and could hit 1, 400 percent by the end of the year.

"This is dramatic, this is Venezuelans' big problem, it's what keeps workers awake at night, it's what's killing the people with hunger," said lawmaker Angel Alvarado, who added that next year's inflation rate could reach 12,000 percent.

Traditionally acting as Venezuela's sole legislative body, the National Assembly has been slowly stripped of its powers over the course of 2017 as its make-up began to threaten the power of President Nicolas Maduro's socialist government.

After having some of its power taken away by the Maduro-friendly Supreme Court in March, the newly created Constituent Assembly effectively sidelined the National Assembly in August.

The Constituent Assembly has been criticized for over-representing the rural parts of Venezuela that tend to favor Maduro's government.

The National Assembly has been releasing its own data on inflation since January, when the Maduro government stopped issuing its own report.

Opposition politicians blame Maduro and his predecessor Hugo Chavez for ruining the oil-rich country's once prosperous economy with 18 years of government controls over numerous industries and the country's bolivar currency.

Maduro, however, says his administration is being targeted by an "economic war," blaming US sanctions for most of Venezuela's financial woes.

The country's massive inflation has led to a humanitarian crisis as basic supplies, food and medicine have become increasingly scarce. Months of anti-government protests through the spring and summer of 2017 caused at least 163 deaths and more than 15,000 injuries as demonstrators clashed with security services.

Venezuela seeks to restructure debt as economy teeters on insolvency

President Maduro has said that refinacing the country's hefty foreign debts is the only way to circumvent the effect of crippling US sanctions. He did however order the payment of one last major bond in full. (03.11.2017)

President Nicolas Maduro's government had made recognition of a new pro-government body a pre-condition to assuming office. One opposition governor refused to bow to pressure to swear loyalty to the Constituent Assembly. (26.10.2017)