President Nicolas Maduro's government had made recognition of a new pro-government body a pre-condition to assuming office. One opposition governor refused to bow to pressure to swear loyalty to the Constituent Assembly. 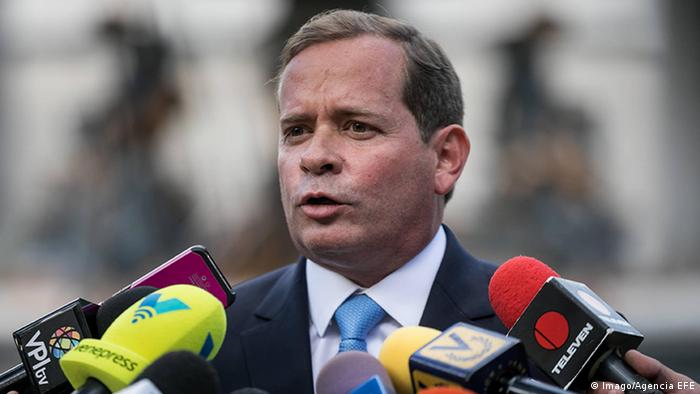 A pro-government regional parliament in Venezuela fired a newly-elected opposition state governor on Thursday after he refused to swear loyalty to the country's new all-powerful Constituent Assembly.

Juan Pablo Guanipa, who won the October 15 gubernatorial election in Zulia state, had refused to pledge allegiance to the Assembly, a body Venezuelan President Maduro had set up in July to circumvent the country's parliament, the National Assembly, and tasked with rewriting the constitution.

In response, the regional parliament in Zulia dismissed Guanipa in a closed door meeting.

Guanipa, who stood in the election for the opposition Democratic Unity Roundtable (MUD), said on Twitter that the regional legislature's decision was an "attack on the will of the people."

Cracks in the MUD

The MUD has said it does not recognize the Constituent Assembly, yet Guanipa was the only one of five MUD governors to boycott the controversial body.

Maduro's government had made recognition of the Assembly a pre-condition for all governors to assume office.

The decision by four opposition governors to acknowledge the Constituent Assembly has split the MUD. On Tuesday, Henrique Capriles said he would leave the MUD in response.

Venezuela's regional elections ended with a shocking victory for pro-Maduro candidates after polls prior to the vote had indicated the MUD winning a majority of governorships.

Venezuela's four-year political and economic crisis has left millions facing shortages of basic goods, such as food and medicine.