Nicolas Maduro's opponents swore they would "never kneel before the dictatorship," but a handful just pledged loyalty to the president's contested parliament. The "betrayal" has opened a rift in the opposition coalition. 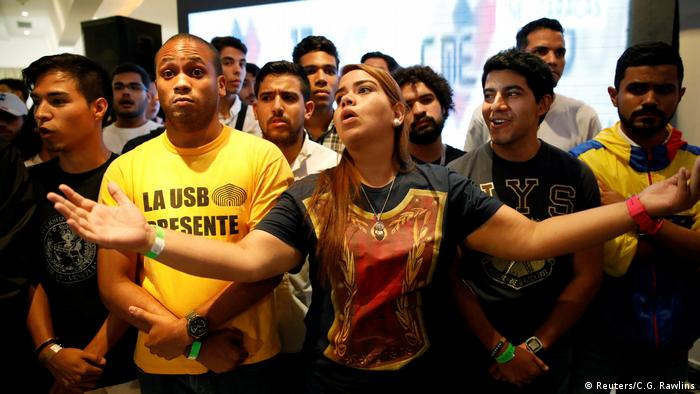 Venezuela's opposition coalition looked to be crumbling on Tuesday amid accusations of treachery and betrayal.

The beleaguered MUD won just five seats in regional elections on October 15, with Maduro's socialists winning the remaining 18. Opposition figures (above) had accused Maduro of rigging the election.

Either way, Maduro warned that any governors who won seats in the election would have to swear oaths in front of the Constituent Assembly, a powerful legislative boday that had been installed by Maduro in August with the task of rewriting Venezuela's constitution. It trumps the opposition-dominated parliament known as the National Assembly.

The five elected opposition governors initially had pledged they would not stand before the Constituent Assembly, which MUD parties and international observers have decried as a blatant power grab by Maduro.

But four of them, all from Henry Ramos Allup's Democratic Action Party eventually reversed course and took the oath.

"We are assuming the political cost of defending our electors' votes," said Laidy Gomez, governor of the western state of Tachira, who took the oath. 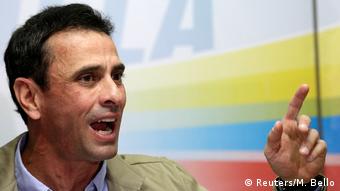 If Capriles pulls out of the MUD opposition coalition, his Justice First party will follow suit

Maduro met with three of the governors on Tuesday and said, "A new era of coexistence, harmony and cooperation has started with an important sector of the opposition."

"When a person is sick, you need to operate to remove the tumor," said Capriles.

Members of Capriles' Justice First party indicated they would also pull out of the coalition if their leader walked away.

Ramos Allup said the four had "exiled themselves" from his party by betraying the coalition and taking the oath. But Capriles accused him of "washing his hands," saying nobody in Ramos Allup's Democratic Action Party moved a finger without the veteran leader's approval.

The only governor who refused to be sworn in, the Justice First party's Juan Pablo Guanipa from the western Zulia state, remained defiant on Tuesday. "This government is misery, destruction and it is doing great damage to Venezuela," Guanipa said.

"Zulia will never kneel before the dictatorship."

Cracks in the MUD

Another important party in the MUD coalition, Popular Will ("Voluntad Popular"), said the oath-taking was a betrayal and that MUD had lost its usefulness.

Political analysts said the fracture within the opposition umbrella coalition spelled a troubled future for the MUD coalition.

"It's the perfect scenario for Chavism, allowing it to press ahead with its strategy of obtaining legitimacy for the Constituent Assembly, while the opposition is unraveling," electoral expert Eugenio Martinez told AFP news agency, referring to the socialist political movement launched by Maduro's predecessor Hugo Chavez.

"The decision will deepen divisions and potentially cause a rupture of the MUD," Risa Grais-Targow, Latin America director for Eurasia political consultancy told AFP.

"It will also provide Maduro with additional incentives to accelerate the timelines for local and presidential elections," with a growing likelihood that Ramos Allup will be the only opposition figure permitted to run for president, she said.

WorldLink: Venezuelans turn to Chile for a new life