Vegetarians developing a taste for meat

The fast-growing Indian middle class now consists of around 300 million people, who model their new consumer lifestyle on the West. As a result, vegetarianism is falling out of favor. 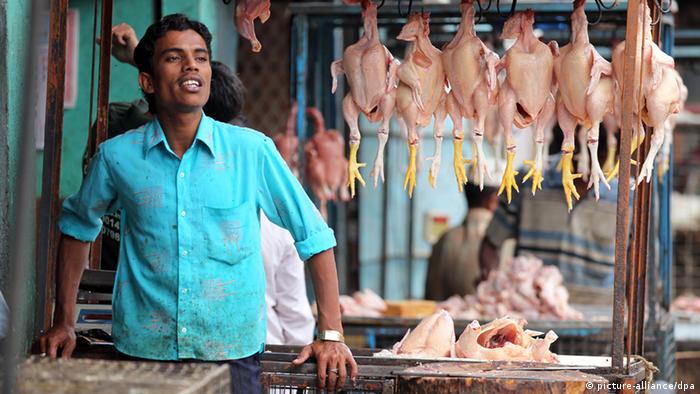 It sounds counterintuitive: India, the land of vegetarians, is registering a rapid rise in meat consumption. Statistics show that 40 percent of Indians don't eat meat - more than in any other country in the world.

Nonetheless, over the past ten years the amount of meat eaten in India has more than doubled. In 2009 it reached around 5.5 kilograms (12 pounds) per head, according to the World Food Program. That's still very little in comparison with Germany, where 61 kilograms of beef, pork and poultry are consumed per person per year.

Meat as a status symbol 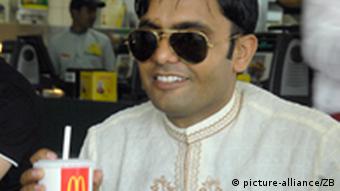 Fast-food chains with big neon signs are springing up all over the place in every city in India. Young people find them particularly enticing, and at the weekends the restaurants are full to bursting. In the big metropolises like Delhi, Mumbai, Chennai or Kolkata they're very popular with families, who like to gather over burgers, fries and Coke at McDonald's, or with a box of deep-fried breaded chicken nuggets at Kentucky Fried Chicken.

Dr. Sanjay Sanadhya, a diabetes expert from New Delhi, views the trend with skepticism. "People in India are just imitating the Western lifestyle," he says. "Overall, we're seeing them become distanced from their own cultural traditions. Added to that, you have factors like globalization and growing mobility, with people traveling more and more often to the West."

Many in the Indian middle class, and especially the younger generation, equate meat-eating with a cosmopolitan attitude and a certain level of education. It's also seen as a sign of affluence, as meat dishes are more expensive than vegetarian food.

Jaspreet Singh, a young student, has always eaten meat and fish. "I make sure that I eat enough protein. I eat chicken, lamb and fish. My body and my figure are very important to me," he says, added that his generation wants to try everything. "If you limit your interests, you're limiting your life. Even if I don't like everything, or don't like the taste, I still want to try everything, especially where food and drink are concerned." 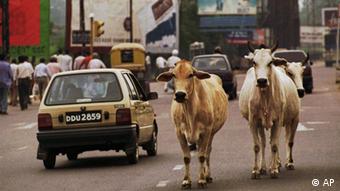 Hindus regard cows as holy, and it is forbidden to slaughter them

Jaspreet's fellow student Neha Chauhan thinks of it as a need to conform. She herself is a vegetarian, but her sister and father eat meat. "My sister travels a lot," she explains. "She has to conform. I haven't had to do that yet, so I can make my own decisions. But if I had to live in a different social environment, maybe I'd conform as well and start eating meat."

For a very long time, many people in Indian respected the religious taboos on eating meat. Centuries-old Hindu texts extol the virtues of forgoing meat. Devout Hindus believe that the cow is a holy animal, and it's forbidden to slaughter cows in India. Around 80 percent of the Indian population is Hindu, and it used to be the case that meat-eaters were regarded as uncivilized barbarians.

Mahatma Gandhi, the political and spiritual father of Indian independence, was also a strict vegetarian. For him, the renunciation of all forms of violence - the cornerstone of his teachings - began at the table, with the food we choose to eat.

Kirti Sharma, a young woman from New Delhi in her early twenties, feels the same way. But she admits that fewer and fewer people of her generation do. "I believe it's much better to be a vegetarian," she says. "Because slaughtering animals, killing other living creatures, can't be good." Sharma says that according to the Hindu caste system she is a Brahmin, and that Brahmins are not allowed to eat meat. She says her parents make sure she doesn't eat any animal products at all. "Sometimes it's difficult if I'm invited to parties, because a lot of cakes contain eggs, and then I do kind of have to eat it," she says. 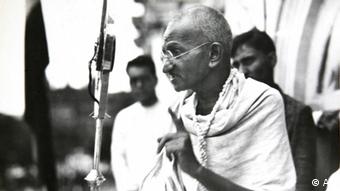 Other religious groups in India, such as the Jains, are not only strict vegetarians, they also don't eat vegetables that grow under the earth, such as potatoes, onions, or carrots, because living creatures might be killed when they are pulled out of the ground. Orthodox Jains often wear a thin mouth guard to prevent them from swallowing an insect by mistake. Muslims, who make up around 13 percent of the Indian population, are only forbidden to eat pork.

Big fast-food chains like McDonald's have adapted to the Indian market. The American company, which has been present in India since 1996, doesn't serve beef burgers there. Instead, it offers the so-called "Chicken Maharajah Burger," which, according to the adverts, will make anyone eating it feel like a maharajah. Clever marketing using Bollywood and cricket stars is presumably one of the reasons why more and more people all over India are eating meat and fast-food.

But the growing consumption of meat brings with it new problems. No direct link has been established between disease and the numbers of Indians now eating poultry, but the general shift towards a more unhealthy lifestyle, particularly among the urban population, is believed to be increasing the risks.

Dr Sanjay Sanadhya, the diabetes expert, warns that the increase in the amount of sugar and fat people are eating, along with the fact that they are taking less and less exercise, means health problems are inevitable. "We're seeing more and more of the so-called 'lifestyle diseases': heart and circulation problems, high blood pressure, obesity, diabetes, strokes. Over the last three decades the numbers have shot up. And I can predict that the situation will continue to get worse." The people of India's growing middle class, whose well-paid jobs mean they can afford to employ maids and drivers, are the most affected.