Many Germans still stick to their unhealthy diet of too much meat and alcohol. Though there are some positive trends, too many Germans are still overweight and also at risk of other illnesses like cancer. 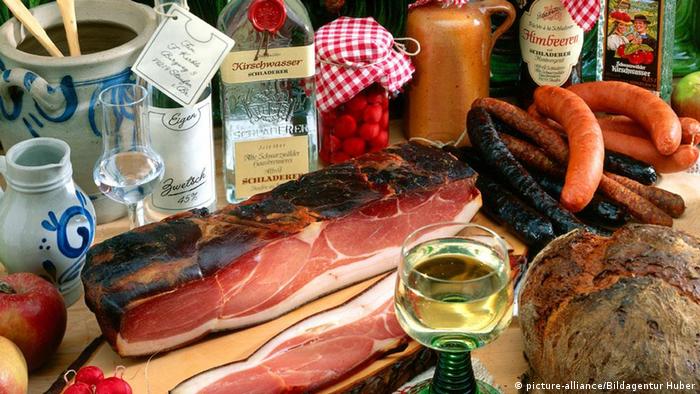 Whether it is pork knuckle, sausage, schnitzel or potato salad: the traditional German cuisine is heavy on meat, fat and calories. But eating habits are somewhat different these days. A 2012 report on what Germans eat, commissioned by the government in Berlin, shows that habits are changing.

Around 60 percent of men and 43 percent of women in Germany are overweight - figures which have not really changed over recent years. They're overweight because they still eat too much meat. 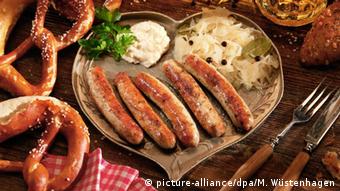 Germans still eat too many sausages

"Meat consumption remains stable at a high level," explains Helmut Heseker, President of the German Society for Nutrition (DGE) which compiled the study. His organization recommends that meat consumption should not exceed 600 grams per week. Many people, especially men, eat that in a day. Even low-fat meat is often unhealthy because of the gravy or the bread-crumb coating.

But the report also points out that the consumption of vegetables has increased - by more than one kilogram per person per year since the year 2000. Currently people eat around 25 kilograms of vegetables per year, providing themselves with the vitamins, minerals and dietary fibers that the body needs.

It's especially tomatoes, cucumbers, carrots and salads that have become more popular while cabbage and legumes like peas and lentils are on the decline. Heseker says there should be more promotion of those: "It would be nice if TV chefs would include them more in their dishes." The consumption of fruit has also slightly declined. 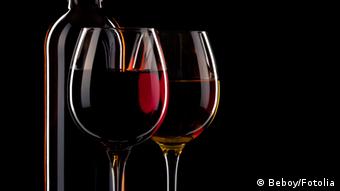 One glass of wine is enough for a woman, two for a man

The report also looked into what and how the Germans drink. Mineral water has become the most popular drink while soft drinks with sugar are also on the rise. They are particularly dangerous as they contain a lot of calories but still leave us hungry.

Wine and beer consumption is on the decline but 31 percent of men and 25 percent of women still drink more alcohol than is acceptable from a medical perspective. The limit for healthy women is 10 grams per day, and 20 grams for men - which is either one or two glasses of wine.

The report has been compiled for the government every four years since 1969, to provide a long-term scientific basis for assessing nutrition trends.

A focus this year was on older people: 74 percent of men and 63 percent of women between 70 and 74 are overweight. Here, the problem is often not only wrong nutrition but also a lack of exercise.

Germans 'heavier than ever'

A new study by the Robert Koch Institute says 53 percent of women and 67 percent of men in Germany are overweight. The researchers are concerned about a rise in obesity. (05.07.2012)

Filmmaker and book author Valentin Thurn spoke to Deutsche Welle about the mind-boggling amounts of food that go to waste in industrialized countries, and the balance of responsibility for hunger in the world. (25.03.2012)