Hundreds of thousands of faithful have witnessed the historic canonization of two former popes. Pope Francis and Benedict XVI are honoring their predecessors, John XXIII and John Paul II. 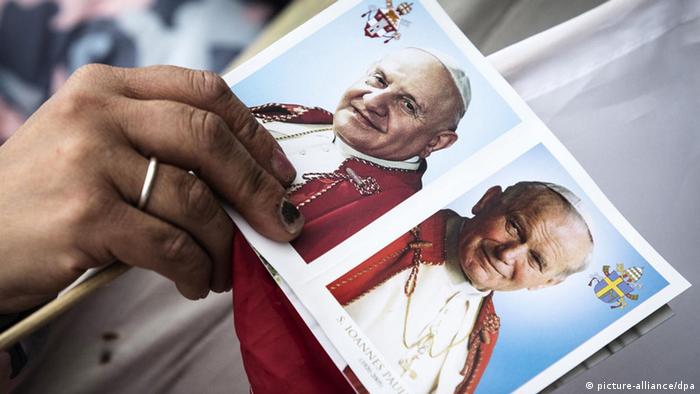 The double-canonization, which was attended by Pope Francis' predecessor, Pope emeritus Benedict XVI, was a first in the Catholic Church's 2,000 year history.

The ceremony began with prayers, hymns and the chanting of the names of the Church's saints.

In a Latin prayer, Pope Francis said "we declare and define Blessed John XXIII and John Paul II be saints and we enroll them among the saints, decreeing that they are to be venerated as such by the whole church."

Relics of the two new saints were then brought to the altar. Blood from John Paul II was brought by Costa Rican woman Floribeth Mora, whose recovery from a brain aneurism in 2011 was declared the miracle required for John Paul's canonization. The relic for John XXIII was a small piece of his skin.

The highly-anticipated ceremony was then followed immediately after by a special Mass open to all in attendance.

In his liturgy, Pope Francis described the two new saints as men of courage. "They lived through the tragic events of that (the 20th) century, but they were not overwhelmed by them," he said, adding that "For them, God was more powerful, faith was more powerful."

Pilgrims from Poland, the homeland of John Paul II, were among the first to arrive in St. Peter's Square as it opened at 5:30 a.m. (0430 UTC) local time, with most of the early arrivals having camped overnight along side streets leading to the square.

"Four popes in one ceremony is a fantastic thing to see and to be at, because it is history being written in our sight," David Halfar, who was visiting the Vatican from Poland, told the AP news agency ahead of the celebrations.

Along with the multitudes of pilgrims, leaders from more than 90 nations were due to attend the canonization celebrations, according to the Vatican. These included the Zimbabwe President Robert Mugabe, former Polish president and Solidarity leader Lech Walesa and the kings of Spain and Belgium.

Both former popes played pivotal roles on the world stage during the 20th century.

Leading the Catholic Church from 1958 to 1963, John XXIII called the Second Vatican Council, which changed many aspects of church life including allowing Mass to be held in local languages instead of just Latin. He also encouraged greater dialogue with followers of other faiths, in particular Jewish people.

John Paul II was pontiff from 1978 to 2005 and became known for helping to hasten the end of the Cold War and bring down communist rule in Eastern Europe. He also established the popular World Youth Days. His canonization will be the fastest declaration of sainthood in modern history. The crowds at his funeral had chanted "santo subito" which means "make him a saint at once."

Earlier this week, critics questioned the appropriateness of declaring Pope John Paul II a saint, citing an abuse scandal linked to an order of priests which he and his closest advisors had strongly supported. However, the Vatican has refuted the claims and said that it had ruled out "personal implication" of the former pontiff in the case.

No one has forced Pope Francis to canonize two of his predecessors at the same time. But there are good reasons for him to do so, says DW's Stefan Dege. (27.04.2014)