Vatican finance chief, Cardinal George Pell, has been charged with multiple sexual offenses, Australian police said. Pell is the highest-ranking Vatican official to be charged in the church's abuse scandal. 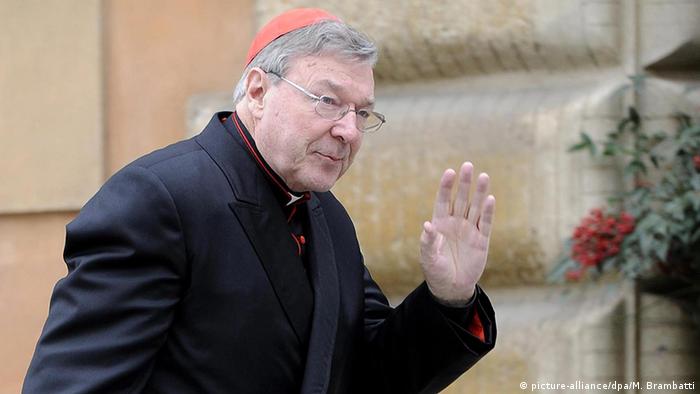 Pell, who was interviewed in Rome by Australian police last October over a number of allegations, was charged with several counts of sexual abuse on Thursday.

"There are multiple complainants relating to those charges," Victoria State Police Deputy Commissioner Shane Patton told reporters. The 76-year-old Pell was summoned to appear before a Melbourne court on July 18, Patton said.

Pell, who is his country's most senior Catholic cleric, strongly denies the allegations, which date back to his time as archbishop of Melbourne and as a priest in the town of Ballarat.

"It is important to note that none of the allegations that have been made against Cardinal Pell have, obviously, been tested in any court yet," said Patton.

At the Vatican, Pell said he would return to Australia to clear his name after a "relentless character assassination" over the past two years of investigations into child abuse within the Catholic Church in his home country.

"I have kept Pope Francis regularly informed throughout this lengthy process, and have spoken to him in recent days about the need to take leave to clear my name," Pell said in a statement. "I am grateful for his support in granting me this leave to return to Australia. I am looking forward finally to having my day in court."

Pell, the third highest figure in the Catholic Church's hierarcy, is the highest-ranking Vatican official to ever be charged in a sexual abuse scandal that has dogged the Catholic church for years.

The charges against him are a blow to Pope Francis, who has vowed zero tolerance for child abuse. He personally appointed Pell in 2014 to lead a reform of the Vatican's finances and increase transparency.

Police have not yet disclosed exact details of the complaints that prompted charges against the cardinal.

A national inquiry launched in 2012 into responses to child abuse over the decades has revealed damning allegations against the Catholic Church.

Data from the inquiry released in February showed seven percent of priests were accused of child abuse between 1950 and 2010, but none of the allegations were ever investigated. There are 4,444 alleged instances of child abuse carried out by 1,880 priests.

Pell has appeared three times before the national inquiry, once in person and twice over Skype.

During those appearances, Pell admitted that he "mucked up" in dealing with paedophile priests in Victoria state in the 1970s. Pell conceded to victims of abuse in Australia that "evil was done."

More recently, Pell himself became the focus of complaints. Police questioning in October followed allegations aired by the Australian broadcaster ABC. At least two men have claimed Pell touched them inappropriately during their youth.

Pell was ordained in Rome in 1966 and returned to Australia in 1971, eventually becoming the top Catholic official in the country before again returning to the Vatican in 2014.

The Vatican's secretariat for the economy says millions of euros have been found which had been missing from balance sheets. Ongoing reforms aim to make the Catholic church's finances more transparent. (05.12.2014)

US President Donald Trump and Pope Francis are worlds apart in their beliefs. One has faith in the power of money, the other in the power of mercy. What could they possibly have to say each other? (24.05.2017)