The pope's close adviser, George Pell, has denied knowledge of child abuse cases in his native Australia. He said he was not expressly told about why certain priests were being transferred. 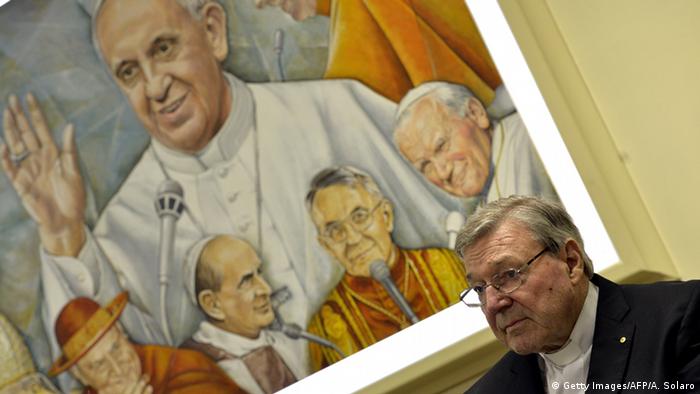 Pell, Pope Francis' financial adviser, was one of the highest ranking Vatican officials to testify to Australia's Royal Commission into Institutional Response to Child Sexual Abuse. The cardinal, who could not travel to Australia for health reasons, gave his statements through a video link on Tuesday.

Commissioner Peter McClellan repeatedly asked Pell about Father Gerald Ridsdale, a priest convicted in 1993, 2006 and 2013 of offenses against more than 50 children in Australia. Ridsdale was shifted from one parish to another after regional bishops consulted with Pell on the appointments.

Pell was a priest in the Australian town of Ballarat in the 1970s and advised Bishop Ronald Mulkearns about placing priests within the diocese. "Gentle and euphemistic language… was regularly used by Bishop Mulkearns on these occasions, so that some of us were kept in the dark," Pell told the commission.

McClellan asked Pell if he had been "deceived" and "lied to" by the Bishop and Monsignor Fiscalini. Pell said that was correct and denied any responsibility for Ridsdale's repeated transfers.

The cardinal - who told reporters ahead of the hearing that he had the pope's full support - also told the commission that the church had made "enormous mistakes" and "catastrophic" choices by refusing to believe abused children, transferring abusive priests and relying too much on counseling to solve the problem.

But Pell also admitted that he did not find the matter important enough. "It's a sad story and it wasn't of much interest to me," he said.

Andrew Collins, one of the abuse victims who had traveled to witness the testimony, accused Pell of lying.

"He's always been seen as an ambitious man and ambitious people have knowledge. They crave knowledge," Collins told reporters. "He wouldn't be in the position he was today if he was the sort of person who sat back and didn't pay attention to what was going on."

Priest Ridsdale's nephew, who was also in Rome, expressed shock and said: "The Catholic Church was behaving with lies and deceit within their own structure, let alone outside that structure and I think that has just been confirmed."