'Vaccination is not a silver bullet,' WHO chief scientist says

Rich nations must stop being greedy with vaccines if they want the pandemic to end, WHO chief scientist Dr. Soumya Swaminathan told DW. Sharing vaccines, tools, and treatments is the only way to stop new variants.

Dr. Soumya Swaminathan, a chief scientist for the World Health Organization (WHO), told DW on Sunday that vaccinations are not enough to end the pandemic.

She called for expanded vaccine equity and sharing of tools in poorer countries to prevent the spread of the coronavirus that causes COVID-19 and its continued mutation.

Although breakthrough infections remain rare, being vaccinated does not mean a person cannot pass the virus to someone else at higher risk.

"You still see countries today with high rates of vaccination and still having increasing rates of infection," Swaminathan explained. "And the higher the rates of transmission, the danger is that you're generating new variants, which are then going to come back and infect those people, even if you are vaccinated. There's really a strong scientific argument to be made for continuing to use the other measures until everyone around the world is protected."

No end to pandemic without vaccine equality

Swaminathan, also an expert in HIV and tuberculosis, said the coronavirus had thrown global inequality into sharp relief and led to what she called a "dual-track pandemic."

"There's one part of the world where large proportions of people are now vaccinated," she said. "Life looks like it's getting back to normal. Unfortunately, half the world still does not have access to the vaccines. Less than 2% of people on the African continent have been fully vaccinated, and life is far from being normal for them."

The only way to end the pandemic for good, Swaminathan argued, was for rich nations to show more solidarity: "It's just going to take longer unless the world decides to come together in solidarity and share the tools, the vaccines, the diagnostics, the treatments that we have today, so we can stop deaths. There are still over 40,000-45,000 people dying every week around the world due to COVID-19 and that needs to stop."

Romania in desperate struggle against COVID-19

Preparing for the next pandemic

She called on the international community to invest in future pandemic preparedness to avoid the devastating consequences the world has seen over the past 20 months.

"The world again needs to think about pandemic preparedness," Swaminathan said, adding that there were several questions the international community needs to address. "How do we really prepare ourselves to prevent the next pandemic? And if that's not entirely possible, how do we detect it early? How do we respond to it?"

She also pointed out that preventions plans would require funding and be set up globally in a manner allowing for data to be shared around the world. 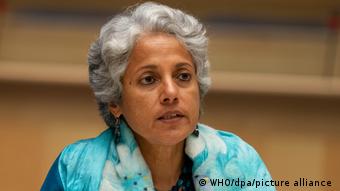 World leaders have to determine how they will prevent another pandemic, Swaminathan said

What is the current state of the pandemic globally?

As Swaminathan spoke, some nations, such as Canada, China, Denmark, and Portugal, had 75% or higher of its population fully vaccinated. Other countries, such as Nigeria, Ethiopia, Syria, and Afghanistan had less than 5%.

According to a New York Times tracker, about 49.7% of the world's population has received at least one dose of a vaccine.

The WHO has not designated a new variant as one of "special concern" since the highly contagious delta variant emerged last spring. However, the so-called delta plus variant has worried doctors in Israel and Japan.

A number of rich countries with relatively high vaccination rates have already dropped pandemic-related restrictions, in some cases despite increasing infection numbers  —  such as the UK nixing most mask mandates for public spaces. Denmark, where 76% of the population is fully vaccinated, has rolled back nearly all measures put in place to curb COVID-19.

Phil Gayle contributed to this report.