US waves though help for hurricane-hit Puerto Rico

The Trump administration has temporarily lifted restrictions on foreign ships transporting cargo from the US mainland to its territory of Puerto Rico. The Caribbean island was badly hit by Hurricane Maria. 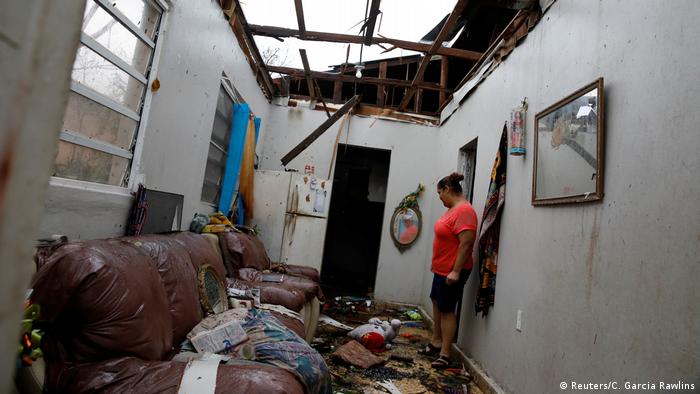 The US government on Thursday lifted Jones Act restrictions for 10 days, after a request by Puerto Rico's governor Ricardo Rossello.

The Jones Act is an obscure federal law from 1920 which prohibits foreign-flagged ships shuttling goods between US ports. Both Democrats and Republicans had been pushing President Donald Trump to waive the Act because they said it could help get desperately needed supplies to Puerto Rico more quickly and cheaply. Temporary waivers had been swiftly made in the cases of previous severe storms, including hurricanes Harvey and Irma.

Trump wrote on Twitter Thursday that supplies of food, water and power generators had been taken to the island.

Hurricane Maria, which struck Puerto Rico on September 20, killed at least 16 people. The region had already been shaken by Hurricane Irma earlier this month, part of a hurricane season that has seen widespread devastation across the Caribbean and US mainland.

Fellow Republican, Senator John McCain, who had been pushing for Trump to waive the act, called on Congress to repeal it permanently, to aid the island's long-term recovery.

Opponents of the law say it's unfair to impoverished Puerto Rico and hurts its economy. A 2013 Federal Reserve Bank of New York report estimated shipping costs from the US east coast to the US territory were double what they were to the nearby Dominican Republic, largely due to the Jones Act. However, the US shipping industry supports the Act.

Trump has faced criticism for his handling of the disaster in the overwhelmingly Hispanic US territory of 3.4 million, with critics saying the federal disaster response was slow compared to the response to hurricanes Harvey and Irma on the mainland. He has also come under fire for continually sending Tweets and making statements about kneeling protests by sports players as the Puerto Rico disaster was unfolding.

Trump and his advisers have defended their disaster response, with Acting Homeland Security Secretary Elaine Duke, who signed the Jones Act waiver, telling reporters that the food, water and fuel shortages on the island were the fault of the hurricane.

"The relief effort is under control," Duke said.