US President Donald Trump has launched a new attack against American football protesters, saying they are disrespecting military personnel. He hit back at critics who said he is devoting too much attention to the issue. 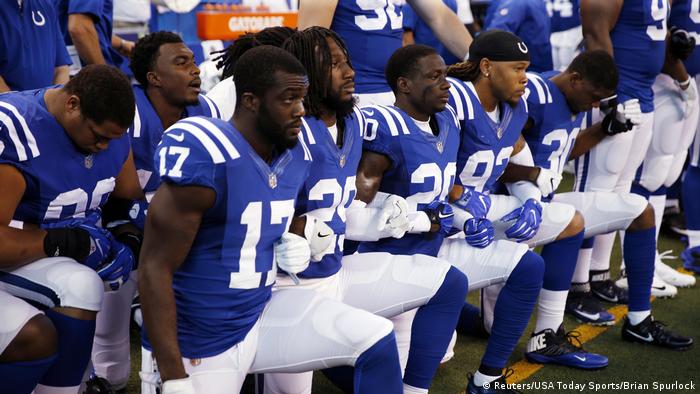 Speaking to the press on Tuesday, President Trump said he was "ashamed" of the athletes who kneel during the American national anthem, which is played before nearly all major sporting events in the US.

Trump pointed out that "many people have died" while fighting for the US, adding that "for people to disrespect that by kneeling during the playing of our national anthem I think is disgraceful."

Read more: Two sides of the US national anthem protests in the NFL

Trump's comments were the latest salvo in the dispute with players of the National Football League (NFL) as they protest racial injustice in America. The "take a knee" protests started last year with Colin Kaepernick, formerly of the San Francisco 49ers.

His controversial actions faded from the public eye after the end of Barack Obama's presidency, but Trump reignited the controversy with a speech last Friday when he said any protesting player was a "son of a bitch" who should be "fired."

In response, around 200 football players — and some coaches, owners and executives — across America joined the protest over the weekend.

In recent days, Trump has devoted many of his tweets to the issue.

On Tuesday, reporters asked Trump if he was giving too much attention to the NFL issue, and too little to more pressing crises, including the hurricane damage on the US territory of Puerto Rico.

"To me, the NFL situation is a very important situation," Trump responded. "I've heard that before — about was I 'preoccupied.' Not at all. Not at all. I have plenty of time on my hands. All I do is work."

According to a new Reuters/Ipsos opinion poll, 57 percent of Americans do not believe the kneeling players should be fired. The results, however, were split according to party lines, with 82 percent of Democrats and 29 percent of Republicans rejecting Trump's position.

At the same time, 58 percent said "professional athletes should be required to stand during the national anthem at sporting events," according to the Tuesday poll.

Trump 'has free speech rights too'

US Attorney General Jeff Sessions publicly sided with the president on Tuesday, saying the athletes were making a "big mistake" and that their action "weakens the commitment we have to this nation."

"The players aren't subject to any prosecution, but if they take a provocative act, they can expect to be condemned, and the president has the right to condemn them, and I would condemn their actions," he said at a free speech-themed address at Georgetown University's law school.

When asked about Trump's condemnation of the players who were exercising their free speech by protesting, Sessions responded by saying that "the president has free speech rights too."